What it is, in a nutshell
An unmanned boat with some of the same capabilities as a vessel with a crew.

What it is, in a slightly bigger shell
This autonomous sea vehicle (ASV) can detect and track nearby objects and determine how far away those objects are. It can also navigate autonomously. The vessel includes a failsafe navigation system, as well, so it can be guided manually. All of its systems are managed by a single board computer “about the size of a typical wallet.” 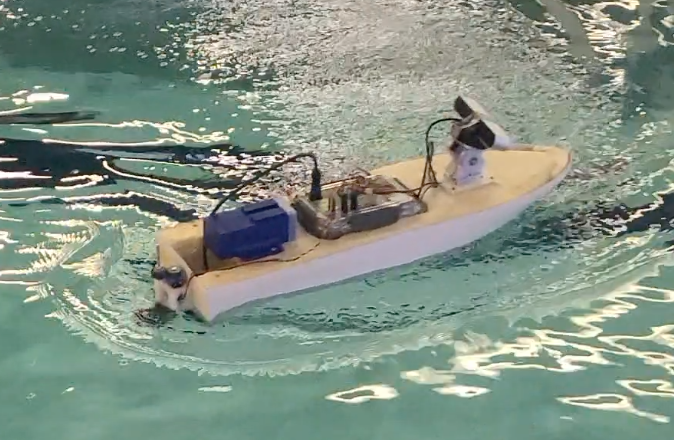 The team is testing its autonomous sea vehicle in the swimming pool at the VCU gym.

Why it needs to exist
A boat like this has the potential to contribute to a better understanding of the oceans. Its object detection and data tracking features can be applied to conservation, surveying, deep sea mining and search-and-rescue efforts.

What they’re working on right now
The team is implementing the autonomous navigation system and improving the control systems. The students are testing the vehicle's functionality and object detection capabilities in the pool at the VCU gym.

The biggest challenge so far
Their design for the autonomous navigation system requires implementation and testing of many software components, and this has taken a lot of time.

Their goal by the end of the year
The team said the thing they are most excited to show off when the project is finished is the boat’s obstacle detection and tracking-based obstacle avoidance system.

Unsung heroes of this project
Benjamin Goldman, M.S., from the Naval Surface Warfare Center at Dahlgren, is the unsung hero of this project according to team members. Goldman facilitated the sponsorship of the project and provided the model boats they used to create and integrate the system. Another unsung hero, team members said, is Robert Klenke, Ph.D., professor of electrical and computer engineering. The team could not afford a ZED stereo camera and their budget was already spent, so Klenke provided one.