For patients with braces, flossing teeth is a pain. A VCU student’s invention could make it easier

Christina Gordon’s device, the Proxy-Flosser, could ease the daily cleaning routine of those who wear braces. Her invention is one of five that has received funding from VCU’s Commercialization Fund

By A.J. Hostetler
Office of the Vice President for Research and Innovation
--

Christina Gordon, a Virginia Commonwealth University dental student who dislikes flossing, invented a cleaning device for orthodontic patients who wear braces. Now her invention is one of five projects awarded funding to help it reach the commercial market.

As a preteen, Gordon, now a doctoral student in the VCU School of Dentistry and vice president of the Class of 2023, wore braces and struggled to clean her teeth. She agrees with those who complain that the recommended oral hygiene for orthodontic patients — brushing with a manual or electric toothbrush, cleansing the areas around the brackets and under the wire with an interproximal brush and flossing — is complicated and time-consuming, even though they know the process reduces the risk of cavities and gum disease.

Gordon believes her device, the Proxy-Flosser, could ease the daily cleaning routine of the more than 4 million Americans who wear braces. “I’m a dental student, but despite this fact, I absolutely hate flossing,” she said. “However, flossing is absolutely essential for the maintenance of oral hygiene, and especially important among children and adults undergoing orthodontic treatment.”

Her product can simultaneously floss and clean around braces in one motion, saving consumers time and money. Orthodontic patients would be encouraged to follow the proper cleaning regimen, she said. The new funding will allow her to work on prototype development. 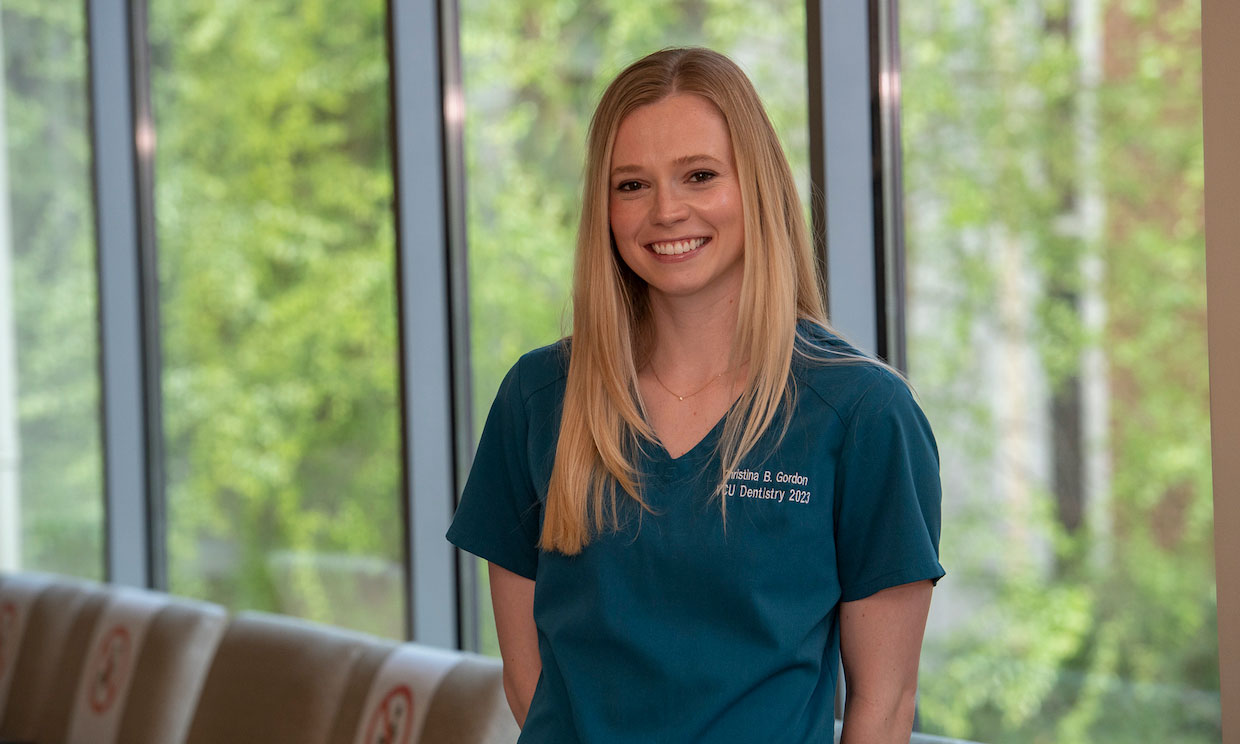 Gordon's product can simultaneously floss and clean around braces in one motion. The new funding will allow her to work on prototype development. (Tom Kojcsich, University Marketing)

The funding for Gordon’s project came from VCU’s Commercialization Fund, whose board guides VCU Innovation Gateway in advancing university inventions with funding to improve their odds of getting to market to benefit society. Typically, a total of up to $300,000 is awarded each year, in two rounds.

"Innovation Gateway is honored to support VCU inventors, whether faculty members or students such as Gordon, through the Commercialization Fund," said Ivelina Metcheva, Ph.D., senior executive director for Innovation Gateway, within the Office of the Vice President for Research and Innovation. “Over the last five years, we have provided over $1.7 million in funding to 58 projects. Recipients have gone on to receive more than $18.5 million in follow-on funding, secure eight licenses  and launch five Virginia-based startup companies."

In addition to Gordon’s device, these other projects recently received funding:

- College of Engineering Dean Barbara D. Boyan, Ph.D., the Alice T. and William H. Goodwin, Jr. Professor of Biomedical Engineering, and colleagues won funding to extend their work in designing new kinds of biodegradable materials that rapidly integrate into the body. The project would provide a way for orthopedic surgeons replacing bone with an implant to incorporate a routinely used antibiotic into a polymer hydrogel (invented by VCU and Georgia Tech researchers) that allows for the timed release of medications without damaging the agent or surrounding tissue.

- It’s said that failure is not an option, but the occurrence of failure can have high consequences in today’s highly complex, critical systems with embedded advanced computing technology such as those used in the energy industry, health care and transportation, from self-driving cars to nuclear power plants. Carl Elks, Ph.D., an associate professor in the Department of Electrical and Computer Engineering and colleagues won funding support for the further development of a computing platform for such critical applications, called SymPLe Architecture. SymPLe is based on the concept where verification requirements are “baked” into the design and development process from the beginning. This streamlines the development process, making it easier for testers to verify and eliminate the occurrence of unforeseen software errors.

- Sarah Seashols-Williams, Ph.D., an associate professor in the Department of Forensic Science, recognized the difficulty of separating genetic information from each individual whose cells or body fluids were mixed in a sample. This commonly occurs with evidence of sexual or physical assaults, which can result in mixtures of blood, saliva, or both on skin, surfaces or clothing. Typically, the forensic scientist can’t tell if the samples contain a mix of DNAs until the end of the analysis, which further complicates the testing and slows the results. The new funding will allow her team to evaluate the developed procedures and microdevices used to separate the identities of individuals involved in sexual assault mixtures.

- Vamsi Yadavalli, Ph.D., a professor in the Department of Chemical and Life Science Engineering, won commercialization funding for developing a prototype biodegradable smart sensor for healthcare applications. The technology allows the use of biomaterial inks his team previously invented, with high-throughput microfabrication techniques to form soft and flexible biosensors.