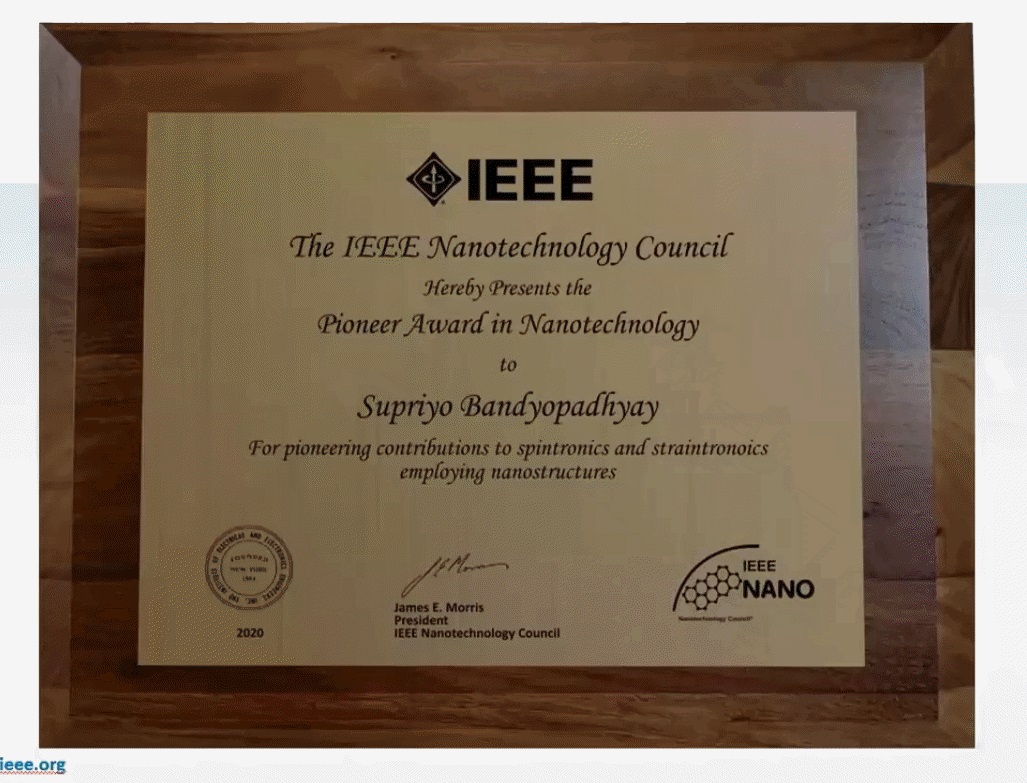 Supriyo Bandyopadhyay, Ph.D., Commonwealth Professor in the Department of Electrical and Computer Engineering, has received the 2020 Nanotechnology Pioneer Award from the Institute of Electrical and Electronics Engineers (IEEE). This annual award recognizes an individual who, by initiating new areas of research, development or engineering, has had a significant impact on the field of nanotechnology.

IEEE is the world's largest association of technical professionals, with more than 423,000 members in more than 160 countries. The Pioneer award is the highest award given by IEEE in the area of nanotechnology. Bandyopadhyay is the 16th winner of this award, which was established in 2007.

“We are very proud to have Dr. Bandyopadhyay as a member of our faculty. Our students have been able to be taught by a leader in a field of research that is critical to the development of new technologies needed for a rapidly growing industry,” said Barbara D. Boyan, Ph.D., Alice T. and William H. Goodwin, Jr. Dean of the VCU College of Engineering.

The award was presented during the annual IEEE International Conference on Nanotechnology, held virtually July 28-31.

Bandyopadhyay is known internationally as a pioneer of spintronics, an emerging technology that uses an electron’s spin to store, process and communicate information. He is also among the world’s leading scholars and innovators in the cutting-edge field of straintronics, an extremely energy-efficient nanomagnetic process that uses mechanically applied strain to manipulate the magnetic state.

In addition to research contributions that include more than 400 research publications and authorship or co-authorship of three textbooks and more than 150 plenary, keynote and invited talks at international conferences and workshops, Bandyopadhyay has provided years of service and leadership to the scholarly community. He is the founding chair of the Technical Committee on Spintronics and past chair of the Technical Committee on Compound Semiconductor Devices and Circuits (Electron Device Society). He was an IEEE Electron Device Society Distinguished Lecturer from 2005-2012 and an IEEE Nanotechnology Council Distinguished Lecturer in 2016 and 2017. He is also a past vice president of the IEEE Nanotechnology Council and has served on many committees of that council.

“I am humbled by this award,” Bandyopadhyay said. “I owe it to my collaborators, students and, of course, my family.”