High school student Alexandra Wright is getting a jump on her studies in a VCU electrical engineering lab.

What do you do if you love engineering but you’re too young for a program that lets high school students research engineering at a college level?

If you’re Alexandra Wright, you go straight to the top.

Wright, a 14-year-old high school sophomore, wanted to further her studies in electrical engineering and looked at various internships and mentorships. The Virginia Commonwealth University Dean's Early Research Initiative for high school juniors and seniors caught her eye, but she was too young to apply. So she emailed Barbara D. Boyan, Ph.D., the Alice T. and William H. Goodwin Jr. Dean of the VCU College of Engineering, to see if there were any other opportunities.

Boyan connected her with Erdem Topsakal, Ph.D., a professor and chair of the Department of Electrical and Computer Engineering. Because Topsakal's lab does not use chemicals and other liquid or gaseous substances, he invited Wright to research there. (VCU Engineering does not allow students younger than 16 to work in wet labs.)

“When I met Alex in person, I realized that her curiosity for discovery, science and engineering was beyond her years as a teenager,” Topsakal said. “Without a doubt, she will make a great scientist/engineer one day, and we will all be proud of her accomplishments.”

Wright attends CodeRVA Regional High School, a computer science-centric school in Richmond where students can earn an associate degree simultaneously with their high school degree. She is pursuing computer engineering, which she plans to use to help others.

“When I was in middle school I had scoliosis so I had to wear a back brace, which was uncomfortable, terrible,” she said. “And I just didn't like it at all. I'm interested in researching that and figuring out a way maybe to combine engineering or nano-engineering . . .  to solve that issue, or diagnose [it] sooner. That way other people don't have to wear a back brace.”

Her decision was confirmed the summer before her freshman year when Wright attended a one-week entrepreneurial program to help girls develop a business or product idea.

That was around the time that her younger sister — now 5 — suffered from febrile seizures, which are caused by fevers.

“I already knew that I liked engineering,” Wright said. “And I was thinking it'd be really helpful to have some sort of device or some way to monitor a young child or infant’s temperature 24/7 because obviously they can't really tell you [if they have a fever].”

During her freshman year, Wright researched similar devices to see if such a sensor was actually possible. She discovered that VCU students were working on a subcutaneous continuous glucose monitor and a wireless monitor for environmental restoration in the electrical engineering labs.

That’s when she decided to contact the VCU College of Engineering, where she now works alongside senior Jessi Shaffer — who is part of the Capstone Design team developing the environmental monitor — inside Topsakal’s lab. 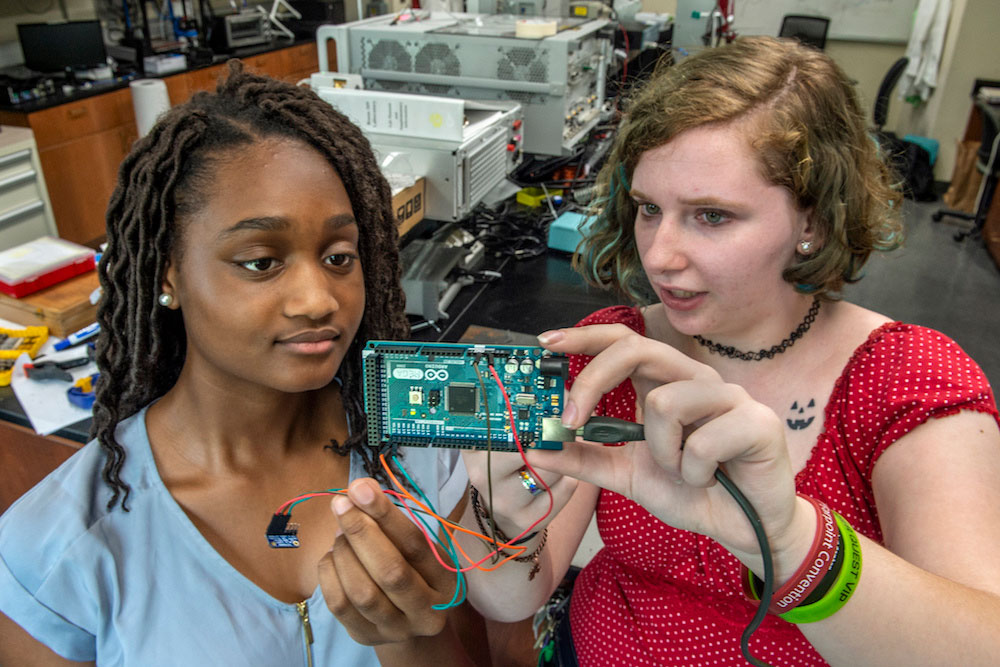 Mentor Jessi Shaffer, right, a senior majoring in electrical engineering, talks with Alexandra Wright about a micro controller that is part of Wright's project. (Photo by Kevin Morley, University Relations)

“She's doing some great stuff by going out and getting so much experience early on,” Shaffer said. “I’d be interested to see where she goes with this because she definitely does have a lot of raw talent and skills.”

Shaffer tries not to be too hands-on in mentoring Wright.

“It's not beneficial to [mentees],” Shaffer said. “It actually is more harmful because then they get used to [going to another] person for help. And that's not really practical engineering. You need to learn your own problem-solving skills.”

The pair started their work together by brainstorming. Wright would bring her ideas to Shaffer for feedback on whether they were actually possible. About a month ago, they started the preliminary stages of putting together a sensor and now are hashing out ideas to test its data.

“We have to see if there's some correlation between the data tested that we get from the temperature sensor and then what the data should be like,” Wright said. “Is it accurate, and can we use that to predict future temperature?”

Wright’s mentorship with the College of Engineering ends this month, but she hopes to come back in some capacity soon — either with another mentor this fall or as a Dean's Early Research Initiative student next summer.

In the meantime, Wright has plenty to keep her busy. She teaches electrical engineering using paper circuits to about 30 students in grades three through six as part of a 4-H STEM club that she started. An avid swimmer, she swims competitively for NOVA of Virginia Aquatics. She is a member of CodeRVA’s architecture club — and along with her fellow members, designed the floor plan for the school’s expansion. She also is a member of the Student Council Association, as well as president of the Leo Club, which promotes leadership and community service.

She has won several awards and runs a small business, Cool Kids Science RVA, with her sister Kennedy, 9.

“My passion really is STEM and so I love to share that with other kids,” Wright said in an interview with WTVR-TV. “… I want to hopefully just encourage other people to start their own business and just go out and do whatever it is they want to do.”