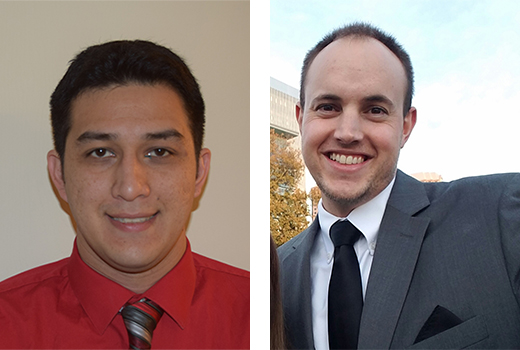 Armond Conte, a 2015 graduate of the Master of Science program in the Department of Electrical & Computer Engineering, has been selected to receive VCU’s Outstanding Master’s Thesis Award in Math, Physical Sciences and Engineering.

Brian A. Smith, a 2015 graduate of the Master of Science program in the Department of Biomedical Engineering, has been selected to receive VCU’s Electronic Dissertations and Theses Master’s Thesis Award.

As recipients of VCU’s awards, Conte and Smith will both be nominated for the Conference of Southern Graduate School’s 2017 Master’s Thesis Awards.

Conte’s thesis is titled “Censoring and Fusion in Non-linear Distributed Tracking Systems with Application to 2D Radar.” The objective of his research is to study various methods for censoring state estimate updates generated from radar measurements. In his study, 2D radar data are generated and sent to a fusion center using the J-Divergence metric as the means to assess the quality of the data. Three different distributed sensor network architectures are considered which include different levels of feedback.

Using existing statistical metrics, Conte’s study offers a method to assess which 2D radar data are and are not useful. After making that determination, the process sequesters unuseful data instead of forwarding it. One potential application of this research is to reduce the number of transmissions from sensors with limited battery life that send their data to a fusion center, allowing them to operate for a longer period of time.

Conte was a part-time graduate student at VCU while also working full-time as an engineer at Naval Surface Warfare Center in Dahlgren, Virginia. He credits his thesis director with helping shape this research, saying that Ruixin Niu, Ph.D., assistant professor in the department of Electrical & Computer Engineering, provided academic and practical assistance.

“My thesis would have been impossible without my adviser,” Conte said. “It would not exist. I had no grants for my master’s research, so he helped me locate existing research to build on. He also helped me understand the importance of statistical metrics. Dr. Niu’s knowledge and what he has given me are the basis of my research and my career.”

Conte is currently a research and development engineer with Pennsylvania State University.

Smith’s thesis is titled "Patient specific computational models to optimize surgical correction for flatfoot deformity.” It also received an award in the 2016 Summer Biomechanics, Bioengineering and Biotransport Conference and is published in the Journal of Orthopaedic Research, which has a five-year impact factor of 3.15.

“We can do much more with computer models than with cadavers,” Smith said. “Computational modeling is more economical and allows for more exploration than can feasibly be performed with cadaver research.”

Smith’s research concluded that combining a hindfoot procedure (Medializing Calcaneal Osteotomy) with one of two lateral column procedures (the Evans osteotomy or Z osteotomy) provided the best correction to AAFD, but with potential for side effects such as arthritis.

Jennifer S. Wayne, Ph.D., professor in the Department of Biomedical Engineering, directed Smith’s thesis. Smith said that Wayne and the lab resources she provided were essential to his research.

“I came through the undergraduate biomedical engineering program with Dr. Wayne, and she was my capstone advisor. She provided continued support through this research. If I hit a snag, she would help me think about it differently,” he said.

Smith is currently a research and development engineer with Skeletal Dynamics in Miami, Florida. Although his master’s thesis has garnered acclaim as a significant intellectual contribution to biomedical engineering research, he is most interested in its clinical impact.

“My focus is all about the patients, and getting them back to normal function without pain,” Smith said. “If we can give surgeons good information and they can use it to help develop clinical insights, that’s my measure for success.”