VCU’s Office of Development and Alumni Relations (DAR) newsletter interviewed Brian Campbell, executive director of development for the College of Engineering, as its “DAR-ling.” Campbell shares what it was like to serve in the U.S. Air Force at a pivotal moment of history in Cairo, Egypt and how he feels about returning home to Virginia.

You’ve held development positions all over the country, from Iowa to Nevada to Pennsylvania to North Carolina. What made you want to come back to your home state of Virginia?

When I left Virginia 15 years ago, I always thought that I would come back at some point. My wife and I are both from Gloucester and were starting to make the drive from Raleigh up to Gloucester almost every weekend. I started to think, “Why wait until you retire to ‘go home’?” I began to look at VCU in particular as a place that might be a good fit for me professionally. Jay Davenport helped seal the deal when he asked me if having an impact at VCU Engineering as a capstone to my fundraising career would interest me. I knew I was going home after that first series of interviews.

Share a favorite story from your six years in the Air Force. 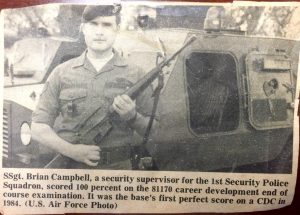 The caption reads: SSgt. Brian Campbell, a security supervisor for the 1st Security Police Squadron, scored 100 percent on the 82270 career development end of course examination. It was the base’s first perfect score on a CDC in 1984. (U.S. Air Force Photo)

I joined the Air Force a few days after my 18th birthday in September 1980 (I took a bus from Fort Eustis, Virginia, to Richmond and was processed in at the Federal Courthouse on Main Street). I was lucky enough to get stationed at Langley Air Force Base in Hampton. We were part of the Rapid Deployment Force, which was a precursor to today’s Central Command. It was basically certain military units that could be anywhere in the world quickly, if a crisis would arise. In October 1981, President Anwar Sadat of Egypt was assassinated in Cairo. A few days later, I was sent with a handful of other guys over to a classified airfield in Egypt to guard two AWACS aircraft that were there to help the Egyptian government prevent any incursion from hostile forces and help control their air assets. A few weeks into our mission, five of us accompanied one of the aircraft to Cairo West Air Base. We were the first Americans to visit Cairo since the assassination. Once the plane landed and had taxied to its assigned spot, the aircraft commander (pilot) came back and said, “OK, you guys go out first.” We were armed with M16s and stood between the aircraft and what appeared to be a few thousand angry Egyptians for about two hours. It was just the right amount of fear and adrenaline for a 19-year-old kid from Gloucester. “Stress” also became relative after that experience.

When you were hired at VCU, you were quoted as saying, “Excitement is in the air!” What inspires you about fundraising for the College of Engineering?

That story starts with Dean Barbara Boyan. There aren’t that many female engineering deans in the United States, and the number who are also members of the National Academy of Engineering I suspect is one or two. She has incredible vision, gravitas and the ability to see where engineering can be relevant and needs to be relevant. The Amazon announcement continues to fuel Virginia’s digital economy, and a number of these factors put VCU engineering at the crossroads of opportunity. The next 20 years have the potential to be not only be impactful for the college and the university but also the role that we can play in creating those opportunities for all Virginians. That’s exciting!