Cory Gray spent his senior year at Virginia Commonwealth University working with classmates from the College of Engineering and School of Business developing an augmented reality app for Newport News Shipbuilding.

“The biggest thing I got out of this was project management,” said Gray, a recent computer science graduate. “I had to learn how to work with my teammates and, at times, manage them. Through this whole process, I learned about what kind of leader I am. Now that we [have come] to the end, I can reflect on that and think about how I can improve as a leader and a coworker.”

The project introduced, exhibited and explored recent advances made in augmented reality technology, while identifying a marketable product for which the students developed a business plan.

“Our project was effectively researching augmented reality, which is simply adding virtual elements to real life using either a screen or a lens of some sort,” said Tal Reznikov, Gray’s teammate and a computer science student who graduates in December. 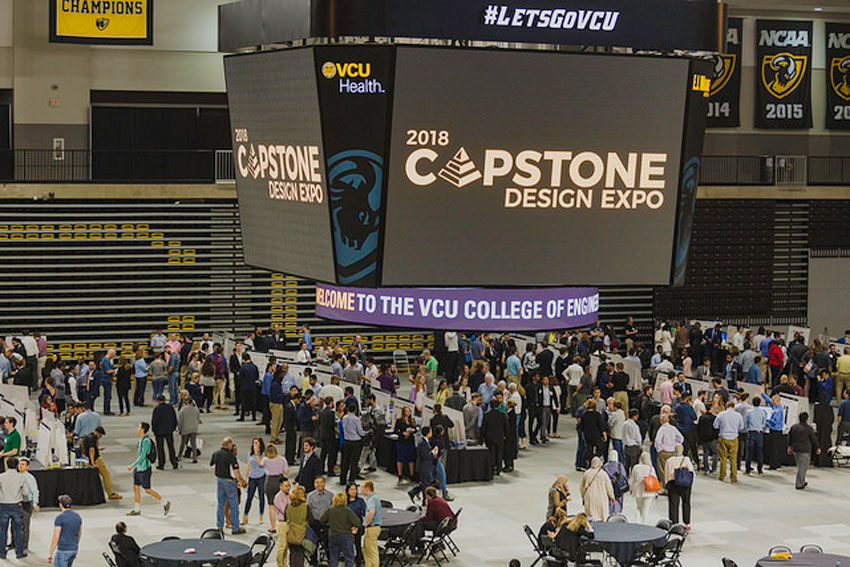 Students in the Virginia Commonwealth University College of Engineering spend their entire senior year working in teams to design, build and test prototypes for actual, real-world problems and applications. These projects represent the culmination of the graduating class’s education and offer design teams the opportunity to display and demonstrate their prototypes to the Greater Richmond community at the annual Capstone Design Expo.

Their team was one of more than 90 participating in a yearlong Capstone Design course that prepares students for the everyday practice of engineering. The endeavors culminate in VCU's annual Capstone Design Expo in April, which features projects developed by student teams and engineering faculty members in cooperation with industry experts, nonprofit organizations and the VCU School of Medicine.

While the augmented reality project involved complicated programming and systems unrecognizable to non-computer scientists, Gray, Reznikov and classmate Nathaniel Ingram were able to explain it in layman’s terms to their School of Business counterparts.

“It's kind of like ‘Pokémon Go’ without the Pokémon,” Ingram said, providing an easily understood reference point for how the technology works.

Augmented reality can be used for games, such as virtual paintball. There also are more practical applications, Reznikov said.

“Let's say you're trying to see if your carpet is going to match the new couch that you want to buy,” he said. “You can bring the couch home in an [augmented reality] application and place it where it's going to go in your house and see if the colors match up.”

Another use, specific to Newport News Shipbuilding, is training manuals. Rather than flipping through pages and pages of blueprints for a complex system of machinery, employees could look at an animated 3D model and pinpoint the exact part on which they want to work.

Recent business graduates Benjamin Gillis and Chandler Garrison said they learned how to communicate with their engineering counterparts while working on the project. Garrison downloaded every augmented reality app he could find so he could better understand components such as anchoring systems and targeting systems.

“I'm not the most familiar with coding and all that kind of technology, but lately I'm just playing around with what we need to do,” Garrison said. “We're able to communicate what we need from them. We don't tell them exactly how to do it [but] give them an end goal.”

The team worked best by setting small goals through the year, asking themselves what they needed to accomplish each week, Gillis said.

“‘What are we getting done this week? What are we going to research? What questions do we have? What do we still have to answer?’ Then we had a couple of big-picture items for the project itself, like marketing, analysis, industry analysis, big things like that,” Gillis said. “We knew that we had to end with a full business plan. We had to make sure that we had a bunch of little steps each and every week that we were working on.”

Excellence in Design Award winners of the 2018 Capstone Design Expo:

* Winner of the School of Business Entrepreneurship Award

Mechanical and Nuclear Engineering (tie): “Fluids as an Artform”