Conway received the Rising Star Award for his research on the role of mechanical forces in regulating function of epithelial cells. Epithelial cells separate the body from the outside environment and are the cells that provide a physical barrier in skin, lungs and the intestines. Conway’s paper, titled “Mechanical Force across E-Cadherin Regulates Epithelial Acini Homeostasis,” examined the differences in mechanical forces for epithelial cells grown as 2D monolayers or as 3D acini, also known as cysts or spheroids. Cells in 3D had higher mechanical tension at cell-to-cell contacts, in part because of internal pressure. His findings suggest that pressure is an important step in the formation and homeostasis of epithelial acini. 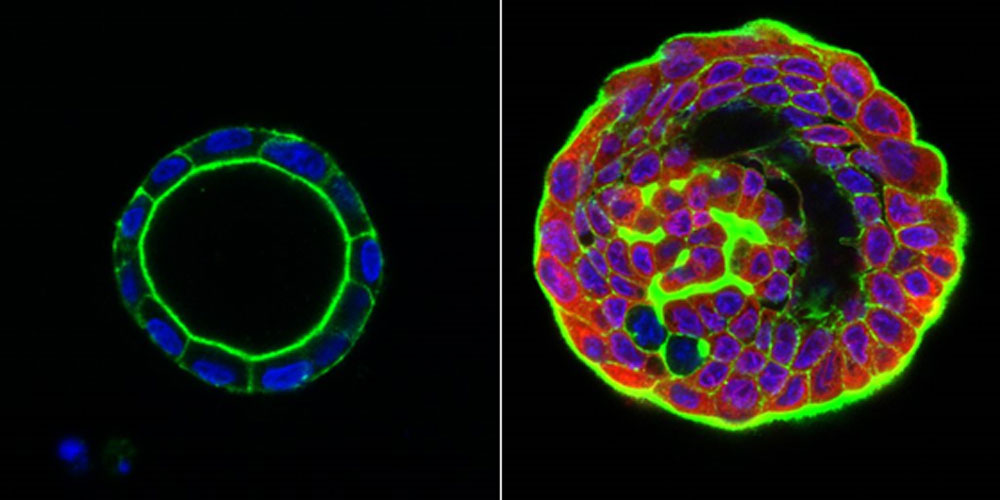 Conway’s award recognizes his research on the role of mechanical forces in regulating function of epithelial cells, which separate the body from the outside environment and provide a physical barrier in skin, lungs and the intestines. At left is a normal epithelial acinus. At right is an epithelial acinus filling in which Conway’s lab has decoupled the nucleus from the cytoskeleton.

In future research, Conway’s team will build on these findings by investigating how other regions of the cell, like the cell nucleus, experience mechanical forces. “We may also scale up to larger structures,” he said. “We are interested in developing a better understanding of the role of forces on cells when they combine to form larger groups and begin branching.”

Conway’s laboratory in VCU Engineering is focused on developing new tools to measure forces at cell-to-cell junctions, and in the cell nucleus. His research group is especially interested in determining how forces can serve as a communication mechanism regulating cell proliferation and migration across large groups of cells. The Conway team’s overarching goal is to understand how forces influence physiology and pathology of cells and tissues.