Research by Daniel Bond, a doctoral student in VCU’s Department of Mechanical and Nuclear Engineering, will help NASA engineer better barriers against the much-higher radiation levels astronauts will face in deep space. As the agency prepares to send crews beyond Earth’s lower orbit, it needs spacecraft that protect against strong space radiation.

Bond is lead author on a comprehensive study to assess the effectiveness of the 47 materials most commonly considered for radiation shielding. His advisers and co-authors are Sama Bilbao y León, Ph.D., associate professor in VCU’s Department of Mechanical and Nuclear Engineering and the university’s director of nuclear engineering programs, and Robert C. Singleterry Jr., Ph.D., research engineer with the NASA Langley Research Center. Bond presented the study at the American Nuclear Society (ANS) winter meeting in Washington, D.C. 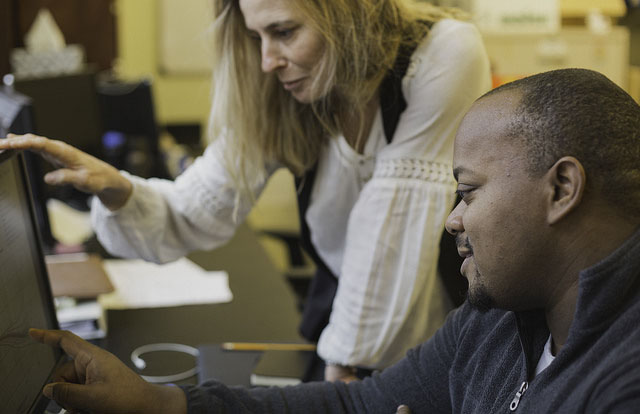 Bond and Bilbao y Leon review data on the effectiveness of materials most commonly considered for radiation shielding. This research will also support NASA’s program to build new vehicles in space

“The response at the ANS meeting was great,” Bond said. “Fellow radiation safety experts were really interested and wanted to know the best and worst materials for this application.”

What were they? To answer, Bond first explained two big challenges in the development of space travel materials. One is weight and volume. “When choosing a radiation shield, we need to take into account that it will need to be suitable for space travel: it cannot be too heavy or result in very bulky spacecraft designs,” he said.

Another problem is durability and reliability. Materials’ shielding abilities for cosmic radiation are often improved as the hydrogen content in the material increases. “Unfortunately, these hydrogen-rich materials are not particularly good for structural applications,” Bond said.

The top performers all contained polyethylene — the polymer used in grocery bags, shampoo bottles, toys and bulletproof vests.  “Polyethylenes are hydrogen-rich materials, which makes them very effective shields for cosmic radiation,” Bond said, “but they can’t withstand the trip.” A solution may be cladding a polyethylene compound with a thin layer of more durable (but less protective) aluminum.

The study’s worst performers were heavy metals such as copper, tungsten and titanium. “One issue with these metals is that they produce a lot of secondary radiation,” he said, referring to the new radiation produced by some materials as they stop the initial beam of radiation. Bond studied secondary radiation and cancer in his master’s research at the University of California at Berkeley.

To support NASA’s program to build new vehicles in space, the study includes two unusual materials: lunar and Martian regolith — essentially soil from the Moon and Mars. The data suggest these regoliths perform similarly to aluminum and could replace some aluminum in onsite fabrication of spacecraft. The regoliths are recreations composed according to chemical analysis of samples brought back from the Apollo and Mars Pathfinder missions.

While the focus of this research is on space missions, Bond also sees applications closer to home. The military, especially the U.S. Navy, uses nuclear generators on submarines and needs light materials that can withstand deep-water pressure. He said this science could also lead to development of movable shielding for national security purposes, so “instead of stationary shelters, there might be a possibility for mobile, temporary shielded facilities, as well as shielded vehicles.”

Thus far, Bond has used NASA’s Online Tool for the Assessment of Radiation In Space (OLTARIS) for this research. The next phase is to compare the OLTARIS results with those  obtained in the Los Alamos National Laboratories’ Monte Carlo N-Particle (MCNP) code, the other industry standard modeling the behavior of radiation in complex structures. MCNP has not been designed to predict the behavior of cosmic radiation, so part of Bond’s work will involve enhancing the code so it is capable of modeling space applications. To this end, Bond is lead author on a separate, but related, study that looks at the effectiveness of OLTARIS to account for ray distribution in its measurements of shielding effectiveness. The insights gathered from this work will help Bond improve MCNP models as needed.