Pharmaceutical aerosols are painless, fast-acting and less likely to cause side effects than medicines delivered via pills or injections. Yet inhaled therapies are often avoided because of the challenges associated with targeting how aerosol particles are deposited within the lung.

“Current inhalers produce fairly large particles, so approximately 90 percent of the medication gets lost in the mouth and throat. It’s swallowed and wasted. This prevents many medications from being delivered through the inhalation route, even though there are a number of advantages to be gained, such as improved efficacy and reduced side effects,” said Worth Longest, Ph.D., the Louis S. and Ruth S. Harris Exceptional Scholar Professor in the Department of Mechanical and Nuclear Engineering in the VCU College of Engineering.

“The problem with making the particles smaller is that they go in really well — but they also come straight back out during exhalation,” said Michael Hindle, Ph.D., the Peter R. Byron Distinguished Professor in the VCU School of Pharmacy.

In “High-Efficiency Aerosol Delivery Using the Excipient Enhanced Growth Concept: A Human Proof of Concept Study,” Longest and Hindle have created a novel platform that produces particles that are tiny when they enter the lungs — but grow in size as they travel down the warm, humid airways. This platform comprises a device that uses a mixer-heater to produce tiny particles, about one-fifth the size of those from conventional inhalers.

With this delivery concept, a pharmaceutical powder or liquid is enhanced with a hygroscopic excipient, essentially a substance that attracts water. “Your lungs are full of water,” Hindle said. “So if you put something inside your lungs that likes water, it’s going to swell and grow in size and not be expelled.” Using sodium chloride — salt — as the hygroscopic excipient, they have tested their system in vitro.

The results have been promising.

“We’ve flipped the needle,” Longest said. “Previously, only 10 percent of the initial dose would reach the lung, and that 10 percent was poorly targeted within different lung regions. With our approach, you can get 90 percent in and distribute that 90 percent evenly, or target a specific lung region.”

The researchers will begin testing their method on adults in two human proof-of-concept trials beginning in late 2019 and early 2020. 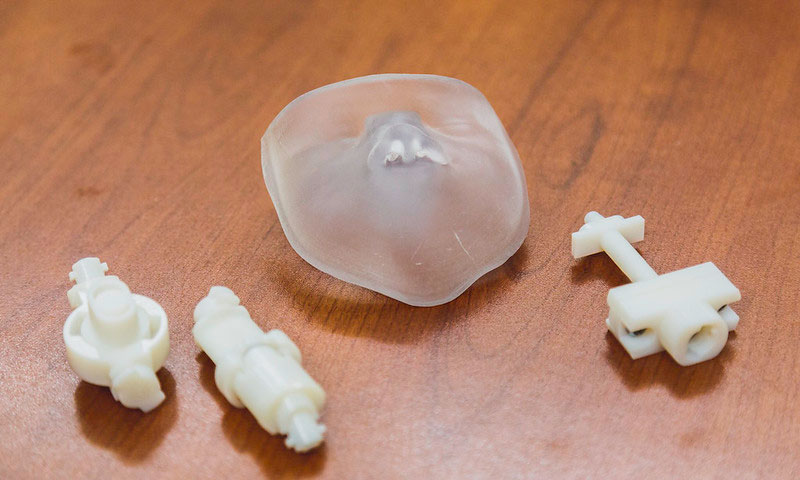 How do you make that?
In the Longest Lab with mechanical engineering student Sarah Strickler

As a junior in VCU’s Department of Mechanical and Nuclear Engineering, Sarah Strickler helped make an infant airway model for pediatric studies in the Longest Lab. She started with a scan of the head of a one-month-old, but a model of a newborn was needed.

Using mathematical formulas and experimentally-verified ratios based on infant body length from another lab's study, Strickler scaled the data back to the dimensions of the head of a baby just a few days old. She extracted the airway and used computer assisted design (CAD) to model a face and the airways from the nasal cavity through the larynx.

“Learning to do CAD geometries for this really expanded my repertoire of skills,” she said. “CAD likes straight lines, but airways are curvy.”

Once the design was perfected, she 3D-printed the airway model in VCU Engineering’s Innovation Lab. “It was small enough to fit into my hand,” she said.

Strickler just began her Ph.D. in mechanical engineering at VCU. Longest is her adviser and dissertation director.

In two separate, but related, NIH studies, Longest and Hindle are adapting this concept for patients ranging in age from newborn to six. Each project proposes a device approximately the size of a lipstick tube that contains a pediatric formulation (liquid or powder) enhanced with a hygroscopic excipient. There are currently no inhalers on the market specifically designed for children or infants, even though their inhaling patterns and volumes differ from those of adults. Pediatric patients therefore must use adult-sized devices.

One study focuses on targeted lung delivery of the antibiotic tobramycin to children with cystic fibrosis, a population prone to respiratory infection because of overproduction of mucus in the lungs. Pediatric cystic fibrosis patients with lung infections usually receive the medication via, 20-minute nebulizer treatments daily, sometimes up to four per day.

Longest and Hindle’s proposed alternative is a pediatric dry powder inhaler that is fast and easy to use. Because its particles are engineered to reach the deep lung, it is expected to eradicate infection more efficiently because there is less risk of resistant strains of bacteria forming in undertreated regions of the lung.

The other study focuses on delivery of surfactant aerosols to premature infants. Surfactant is a substance found in healthy lungs that keeps the tissue supple enough to expand and contract properly. The respiratory system is among the last to develop in utero, so in newborns and preemies, this substance is sometimes not fully developed — or not present at all.

When these infants experience severe respiratory distress, the current protocol is to intubate and administer large doses of liquid surfactant to the lung by way of the throat. This highly invasive and potentially dangerous procedure causes distress and blood pressure fluctuations. In this third NIH-funded study, the researchers are also developing a tiny, small volume nebulizer and a dry powder inhaler for efficient, noninvasive respiratory support for infants.