Engineering in Vision: If you can’t see it, you can’t be it.

On a late-autumn Thursday, children at Richmond’s John B. Cary Elementary School were face-to-face with some of the most powerful design-and-build tools there are. One of these machines can cut through metal like scissors through construction paper. Another can melt iron into liquid in seconds. There’s even a device that makes a water jet so strong it could slice into almost any material.

These fourth- and fifth-graders didn’t need any safety equipment or training to go inside the VCU College of Engineering’s Maker Garage — just curiosity and questions. That’s because Cary Elementary is part of VCU’s new Engineering in Vision program, which uses distance learning to let elementary school students literally see the world of engineering. 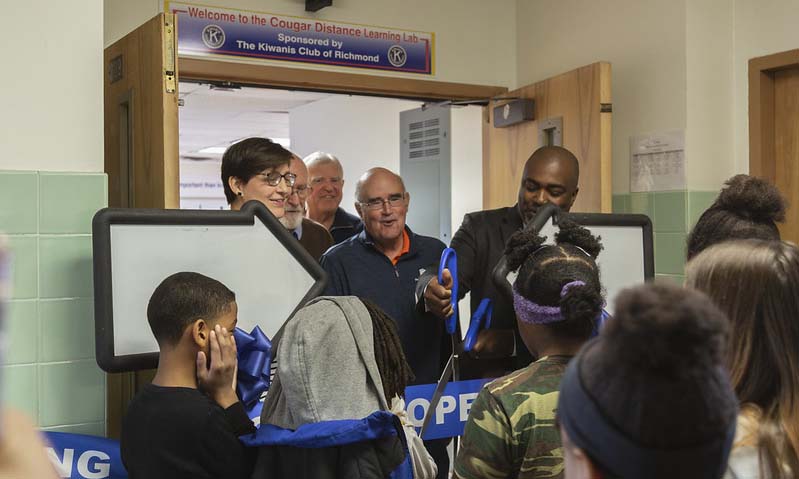 Principal Michael Powell cuts the ribbon on the new Distance Learning Lab at John B. Cary Elementary School, funded by the Kiwanis Club of Richmond. Photo by Rebecca Jones, VCU College of Engineering. 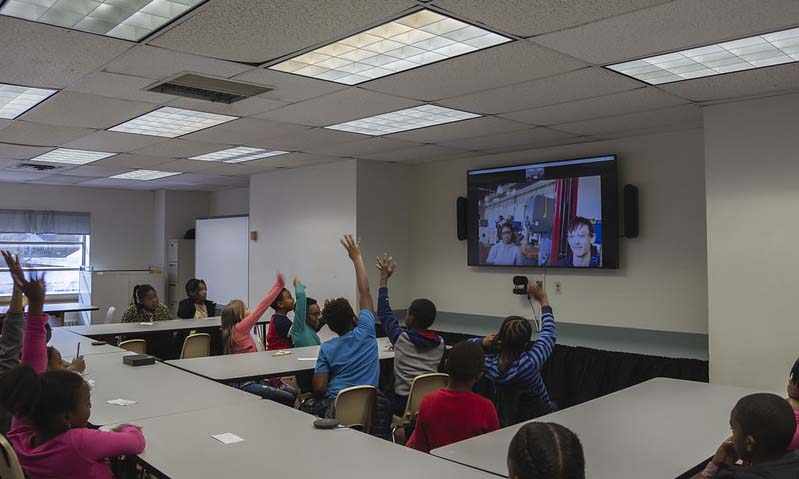 Distance Learning Lab at John B. Cary Elementary School in Richmond, Virginia. Seen on the large screen are Kiara Corbin, a junior majoring in mechanical engineering, and Adam Hamel, a lab technician, who are at VCU Engineering's Maker Garage.Photo by Rebecca Jones, VCU College of Engineering. 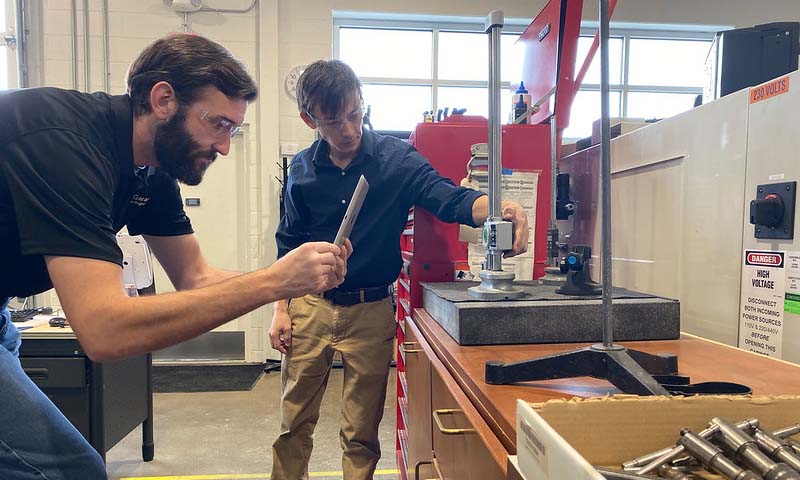 From left: Charles Cartin, Ph.D., associate professor of mechanical and nuclear engineering and director of makerspaces at VCU Engineering, and lab technician Adam Hamel, a lab technician, giving a virtual tour of the Maker Garage. Photo by Keara Chambers, VCU College of Engineering. 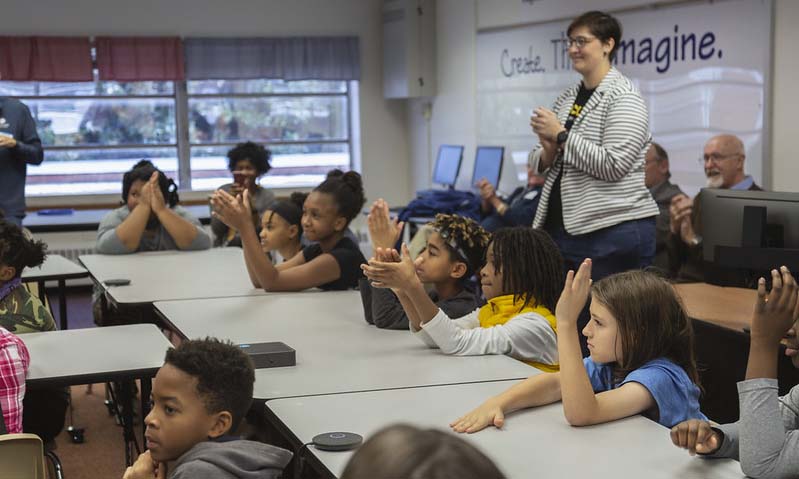 Students applaud and wave goodbye at the end of their virtual tour of the Maker Garage. Photo by Rebecca Jones, VCU College of Engineering

Jenilee Stanley-Shanks, VCU Engineering’s director of government and community relations, got the idea for Engineering in Vision while talking with Michael Powell, principal of Cary Elementary.

“One phrase that kept coming up was ‘if you can’t see it, you can’t be it,’” Stanley-Shanks said. “What do you do if you don't know an engineer? How would you know your skill set could lead to engineering? We didn’t want them to envision it, we wanted them to see it. That’s why it’s ‘Engineering in Vision.’”

And these students have a great view, thanks to the new Distance Learning Lab at Cary Elementary, funded by the Kiwanis Club of Richmond. Its large flat-screen monitor and interactive technology allow entire classes to virtually enter a laboratory, workplace or classroom — and talk to people there in real time.

Like Engineering in Vision, the Distance Learning Lab aims to help prepare children for good jobs and future revolutions in technology, said Kiwanis member Peter Wyeth, calling it “an example of what can be achieved when a public city school, the private sector and a major research university come together in a partnership.”

The students in Cheri Manning’s and Ketia Singleton’s classes had an instant, easy rapport with the bearded man in safety glasses on the large screen. Charles Cartin, Ph.D., associate professor of mechanical and nuclear engineering and director of makerspaces at VCU Engineering, walked throughout the Maker Garage, an engineering makerspace for large-scale projects, to give students a live virtual tour.

He showed them how a Tennsmith manual shear, which the user operates with a foot pedal, could cut a piece of material such as a metal or plastic sheet in one, straight, even stroke. “When the pedal is pushed down, the blades of the shear will move downward cutting the piece off,” he said.

Adam Hamel, a lab technician, described how metal welding works, telling students the welder heats parts of metal pieces into a liquid so they can join together to make one piece. Cartin showed samples of previously welded pieces joined together. He also explained how computers are used to design objects and showed an example of a blueprint and the metal piece created from it.

Kiara Corbin, a junior majoring in mechanical engineering, demonstrated how to use a horizontal band saw to cut a piece of steel tube. The machine whirred loudly when she turned it on, then the saw went through the steel like butter. She held up the piece.

The OMAX water jet cutter was not turned on, but Cartin showed where the strong jet of water comes out and combines with an abrasive granular material to cut through almost any material.

When Cartin asked for questions, most of the hands went up.

“Can you build a race car there?”

They not only can, but do. Cartin told them about VCU’s student chapter of the Society of Automotive Engineers (SAE), based in the Maker Garage, which has designed and built two Formula One-style race cars and even gone to SAE collegiate international competitions.

“Can you make stuff to put in a store?”

Cartin said that a lot of projects in the Maker Garage have been prototypes — experimental models — some for research and educational purposes, others proposed by companies for long-term projects that students are required to complete during their senior year. Some of those prototypes have gone into full production, he said.

“Could you make a human? Or a robot?”

No humans, but we do machining for robots in the Maker Garage, Cartin said. They can also make augmented intelligence-type robots using 3D printers. He added that in industry, many machines like these are operated by robots.

“Can students do all the projects?”

Students build numerous projects throughout the year, he said, with guidance from faculty and staff. “Just like you, college students are always learning. They don't know everything. And even though we're faculty and staff, we don't know everything either. It’s a learning experience for all of us, with lots of collaboration with people in different fields,” Cartin added.

Dreams and designs in the school cafeteria

Engineering in Vision was the topic of conversation at the long, loud lunch tables in the cafeteria. A fourth-grade boy saw immediate uses for machines and processes he learned about today. He likes to repair broken toys, he said, and thinks he could make replacement parts using a metal shear and a 3D printer that prints in rubber.

A self-described expert at designing and building pillow forts got new ideas for how blueprints could help him up his game and design “a luxury pillow house.”

A fifth-grade girl said she’s been interested in tools ever since the time when she was little and her hair got stuck in a Flutterbye Fairy doll. “I found a screwdriver and took it apart,” she said. She now wants to be a marine biologist or an engineer but said the discussion about robots and even designing a human also had her thinking about prosthetics.

The idea of robots that operate machines captured the imagination of a student who hopes to become a dancer. If she could go inside the Maker Garage, she would design a robot that looks like her. Then she’d train it to do her chores. “That would leave me more time for dancing,” she said.

Reflections in a (briefly) empty classroom

Like many, if not most, educators, Singleton and Manning caught up on work and ate at their desks during the 30 minutes their students were at lunch. The papers, projects and learning materials that fill the desks and walls hinted at the volume of activity in these classrooms — and the scale of the challenge teachers take on.

“I think a lot of the things we talk about in class are often abstract,” Singleton said. “So I feel like being able to see and experience things this way will make some of those things a little more concrete for the students.”

Manning said today’s session will help her students see themselves and their futures in a new way. She said she is always looking for ways to expose students to career opportunities other than doctor, lawyer or football player. “When Dr. Cartin asked at the end how many wanted to be engineers, I loved seeing so many hands go up.”

Singleton and Manning will continue talking with their students about engineering and the Maker Garage after lunch, and beyond.

“I want to know what they would ask if they could ask a follow-up question,” Singleton said. “I’ll also ask which tools they liked best and, if they could create a design of their own, what it would be.”

From the sound of things in the cafeteria just down the hall, the students are ready to answer.

See all of the VCU College of Engineering’s community outreach programs and find out how you can get involved.