UPDATE: The results are in. FSAE@VCU passed all of the competition’s rigorous technical inspections with flying colors, clearing VCU02 to participate for the first time in each of the dynamic performance events. “After a miraculous two-year design-and-build, they did an outstanding job in their first race series competition. Now it’s time to focus on the 2020 FSAE competition in Michigan,” Cartin said.

VCU’s newest Formula-style race car is ready for action. Dubbed VCU02, it will go up against 79 other built-from-scratch racers at the 2019 Formula Society of Automotive Engineers (FSAE) international collegiate competition in Lincoln, Nebraska. This year’s competition brings together teams from the U.S., Canada, Mexico, Brazil and India. The cars take to the track June 21 and 22, 2019. 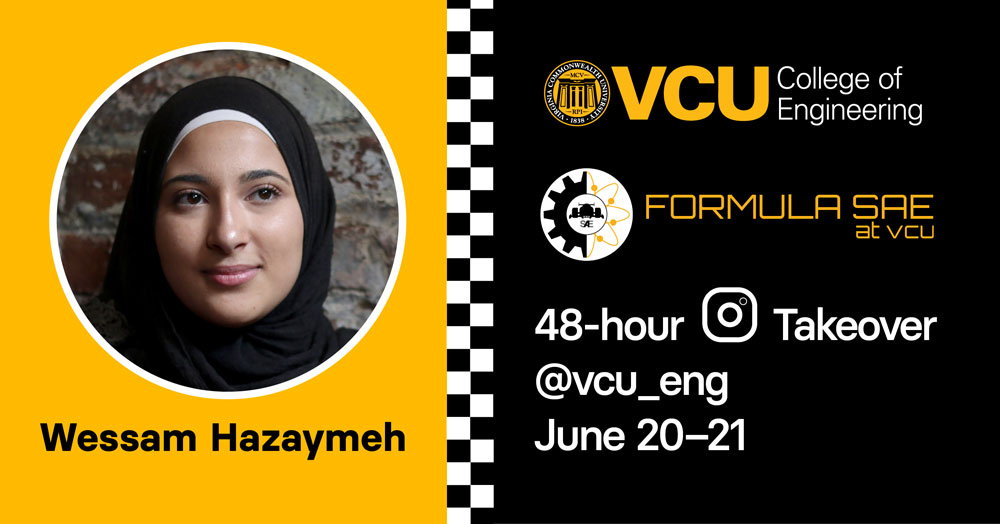 In the world of auto racing, Formula cars have a special mystique. These are the low, sleek, open-cockpit cars made famous in international events like the Grand Prix races. The FSAE collegiate competition is the event of the year for Formula SAE at VCU, a multidisciplinary team of students that designs, builds, and tests the performance of a real Formula-style vehicle and competes with other teams. VCU02 is the culmination of two years of intense effort. It also embodies lessons the team learned from its first car, VCU01.

“This is a much more streamlined vehicle, so it’s smaller, lighter, easier to drive — and faster,” said Ben Loren, outgoing president of Formula SAE at VCU. He worked as a mechanic for three years before deciding to study engineering at VCU. Loren earned his bachelor’s degree in mechanical engineering in May 2019 and will relocate to Seattle later this summer to start as a production engineer with Boeing.

VCU02’s lean design comes from improvements like an ultra-efficient, one-cylinder engine (the last car had four cylinders) that can quickly achieve a top speed of 65 mph. Its steering system is also lighter but has a wider turning radius. The team further trimmed the fat by eliminating clevises, the three-part, U-shaped metal fasteners that add bulk.

The concept behind Formula SAE is that a fictional manufacturing company has contracted a student design team to develop a small Formula-style race car that can be profitably mass- produced. Each student team’s car must meet a set of exacting design specs and safety code requirements.

“The team has worked through numerous iterations to achieve an optimal design,” said Charles P. Cartin, Ph.D., associate professor of mechanical engineering and faculty adviser to FSAE at VCU. “They have implemented the appropriate codes and standards defined by the Society of Automotive Engineers to ensure their vehicle meets all required design specifications. I’m very proud of the work they have completed.”

The competition — and who got them there

On June 20, 2019, teams participate in mandatory safety briefings and and the first round of design judging begins. Judges award points for each car’s engineering design, cost analysis and business plan. Track events begin the next day and include acceleration and skid pad tests as well as obstacle, endurance and fuel efficiency courses. These, too, are judged on a point system.

VCU02 is the work of students from three VCU programs. A Capstone Design team from VCU Engineering designed, fabricated and installed the car’s suspension system. Improvements to VCU02’s chassis, or frame, came from a Vertically Integrated Projects (VIP) team. VIP@VCU gives undergraduate engineering students opportunities to work with graduate students and faculty on innovative, multiyear, large-scale research projects. The Formula SAE at VCU student organization, which includes students from engineering, computer science, business, mass communications and humanities and sciences, has overseen the project as a whole.

They have been meeting regularly for months — usually between classes, internships and jobs — to improve both the car and drivers. Powertrain Controls Solutions in Ashland, Virginia, has provided a workspace, materials and expertise from its team. “Their expertise and knowledge helped us overcome numerous obstacles,” Hazaymeh said.

'The technical tools are important, but you're using all your senses . . . '

Drivers also rehearsed shutting off the car and exiting it in less than five seconds, a safety requirement in a sport where the possibility of fire is the biggest hazard.

“I can’t even get out of bed in less than five seconds,” said Brown, just before managing to exit VCU02 in 4.3 seconds at a recent training session.

As the Nebraska competition drew near, the team tried the car on a larger course at Dominion Raceway in Woodford, Virginia. Each test run was followed by a team huddle around a computer. VCU02’s dashboard has GPS and sensors to transmit performance data to the computer so students can analyze where the driver hesitated, for example, or where the G-force going into a turn was too high or too low.

“The technical tools are important, but you’re using all of your senses when you’re working with this car,” said Jack Stonerock, a rising senior majoring in electrical engineering who will serve on the pit crew. “If you listen to the engine, you can hear how it’s doing.”

The best thing about it

When asked what has been the best thing about FSAE at VCU, these students are unanimous.  “You get to apply engineering to problems that weren’t pre-planned in a class by a professor,” Brown said. “You get to think through real problems.”

Loren agreed that mixing theory with practice was key to his education — and to landing a dream job with Boeing. “This kind of experience really helps, especially students who aren’t coming in with a hands-on background,” he said. “You don’t know what you don’t know until you’re in the field. And employers love to see FSAE on your resume.”

In the run-up to Nebraska, however, these students were also thinking about less lofty and more immediate matters.

“It’s hard to explain what it’s like to drive VCU02. I have no words to describe how much fun it is,” Noble said.