When recent VCU graduate Ellen Korcovelos emailed her idol, a researcher who is one of the best and brightest in his field, she didn’t imagine he would fulfill her request to meet him, let alone invite her to travel to Toronto to conduct research in his lab.

Korcovelos, who earned an undergraduate degree in bioinformatics from the School of Life Sciences’ Center for Biological Complexity, couldn’t believe she had the opportunity to learn from Graeme Hirst, Ph.D., a leading researcher in the field of computational linguistics in the University of Toronto’s computer science department. Computational linguistics involves the use of computer algorithms to analyze aspects of speech such as sentence structure, parsing and word frequency, with the knowledge that speech is an indicator of cognitive health.

For the past eight months, Korcovelos has worked with Hirst and his team to develop a computer algorithm with the ability to identify speech irregularities in patients with various forms of dementia. The goal is to develop an objective test for identifying and measuring the progression of the disease. The opportunity has been a dream come true.

“This was the man who started my passion for computational linguistics,” Korcovelos said. “He is probably the kindest mentor I’ve ever had and he’s definitely been super enthusiastic about the entire process.”

Korcovelos was given the opportunity as one of a university-record 11 Fulbright scholars in 2016–2017. VCU had more Fulbright recipients than any college or university in Virginia this year.

After that initial, tentative email, Hirst spoke to Korcovelos via Skype to get a sense of what she wanted to do with her time at the University of Toronto.

“He told me the basics about what they were doing and he said, ‘I want you to know this is your project,’” she said. “He never assigned me to a specific project, but instead gave me the freedom to explore my interests, which was really nice because the point of Fulbright is an independent study.”

Korcovelos was sure she wanted to use her time in Toronto to apply computational linguistics to the study of dementia.

“I’ve actually been interested in Alzheimer’s research since high school,” she said. “My grandmother had vascular dementia, so it was personal to me. I was actually very scared about the concept of memory loss.”

In college, Korcovelos wanted to discover more about dementia, “to combat it in every way possible.” In search of answers, she studied epidemiology, physics and optogenetics — which enables a certain degree of control of neurons via light.

She discovered she found the disease’s effects on communication particularly devastating, as well as scientifically fascinating, when she was exposed to Hirst’s work in a computer science class taught by McInnes.

Korcovelos was intrigued by a 2009 Hirst study in which he and his University of Toronto team performed a computerized textual analysis of selected novels written by Agatha Christie between the ages of 28 and 82. The researchers counted the number of repeated words and phrases, and the use of indefinite words such as anything, thing and something. They concluded Christie’s vocabulary declined significantly as she aged, which the researchers suggested was due to Alzheimer’s disease and not the natural aging process. Christie wasn’t formally diagnosed with the disease during her life.

Learning about Hirst’s study motivated Korcovelos and revealed a way for her to combat memory loss.

“It pretty much changed my entire world,” she said. “I was like, ‘Oh my God, this is the coolest thing!’ I didn’t know you could analyze text to study how people are developing different cognitive impairments just by the way they are speaking and writing.”

Korcovelos worked with McInnes to conduct a similar study but with a large dataset called the DementiaBank, a shared database of verbal interactions used for the study of dementia. Korcovelos presented her work at the Alzheimer’s Association International conference held in Toronto in July and was motivated to reach out to Hirst with her Fulbright proposal. 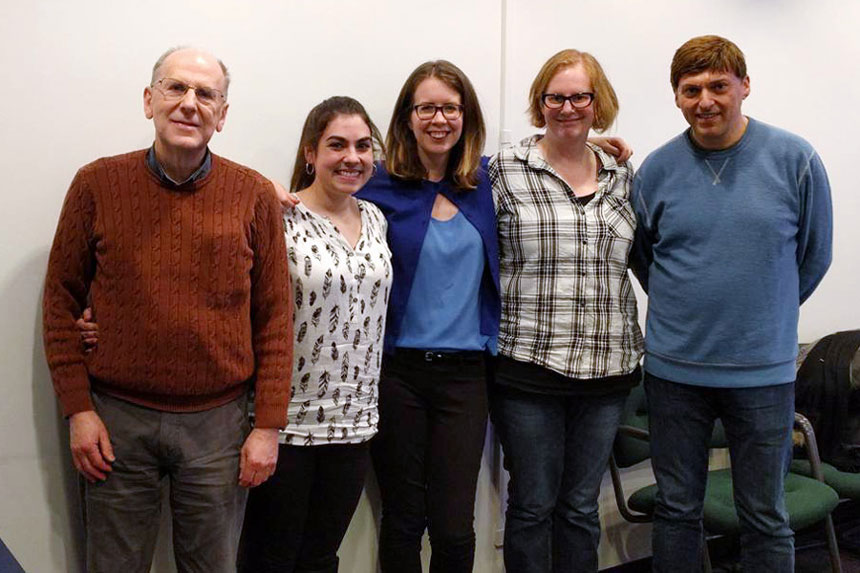 Korcovelos assisted Hirst; Frank Rudzicz, Ph.D., a researcher at the Toronto Rehabilitation Institute; Kathleen Fraser, Ph.D., a former doctoral student in the computer science department at the University of Toronto; and Jed Meltzer, Ph.D., of Baycrest Hospital, with the development of software that measures linguistic features in both audio and text data sets.

The software has more than 100 measures that analyze features of speech and text, such as how often subjects use fillers such as “uh” in a sentence, whether they are using more nouns or verbs, and the complexity of nouns and verbs. Korcovelos helped to develop a subset of features that look at subjective measures of speech, such as how mentally stimulating a specific word is and how concretely a mental image may be formed of that word.

To test the software, Hirst’s partners at Baycrest Hospital ran tests on selected patient groups, all of whom had one of three forms of dementia: resulted from stroke, primary progressive aphasia or mild cognitive impairment. A control group of cognitively normal patients also took the tests. One of these tests is a research technique called the Cinderella Recallings, which requires subjects to verbally recount the fairy tale. Hirst’s team ran transcripts from the test through the new software to analyze speech decline. The team is currently working to publish a paper on the results.

Korcovelos said developing software to be used in computational linguistics is important to screen patients for dementia because it provides a more objective measurement for cognitive deterioration.

“Subjective tests such as how asking, ‘How many times have you forgotten your keys,’ have a lot of ambiguity. As a 23-year-old I fail that one all the time,” she said. “We are trying to find ways to more definitively diagnose people.”

Korcovelos plans to continue working remotely with the team to analyze larger datasets that consist of patients with a wider variety of neurological disease. The goal would be to find out if these diseases have any of the same underlying mechanisms as far as language expression.

“The team still wants me to be part of this project. It’s not one of those mentorship situations where you go and work for them and then you go back and never talk to them again,” she said. “I’m going to be completing all of the different aspects of this study even after I’ve gone. This is a really awesome experience and opportunity to have.”

Korcovelos worked with the National Scholarship Office at VCU to apply for the Fulbright Student Scholarship. The office provides support for VCU alumni, graduate students and undergraduates who wish to compete for prestigious national and international scholarships. Interested students and alumni can contact the office at natlscholar@vcu.edu or 804-828-6868.