Mohamed Gad-el-Hak, Ph.D., professor emeritus in VCU’s Department of Mechanical and Nuclear Engineering, together with investigators at the University of Peking, China, has revealed an aerodynamic heating mechanism that sheds new light on the behavior of ultra-high-speed aircraft. Their discovery comes as news outlets including CBS, CNN and the Washington Post are reporting on the tightening race among China, the U.S. and Russia for dominance in hypersonic systems, aircraft and weapons that travel more than five times the speed of sound.

Researchers previously thought sudden heat spikes, which make hypersonic flight impractical for many applications, occur when air flows reach maximum turbulence. However, Gad-el-Hak and his collaborators have demonstrated through theory, experiments and numerical simulations that temperatures actually jump just before turbulence sets in. The National Science Review has called their achievement “a major progression in hypersonic transition.” The American Institute of Physics said this investigation marks “a new horizon” for future studies of hypersonic heating phenomena.

The discovery is expected to accelerate applied military and commercial hypersonic research for the design of future spacecraft, intercontinental ballistic missiles and hypersonic vehicles. Nevertheless, Gad-el-Hak emphasizes that such applications result from fundamental research. Unlike applied investigations, which set out to solve practical problems, fundamental research seeks to improve scientific understanding of the natural world. 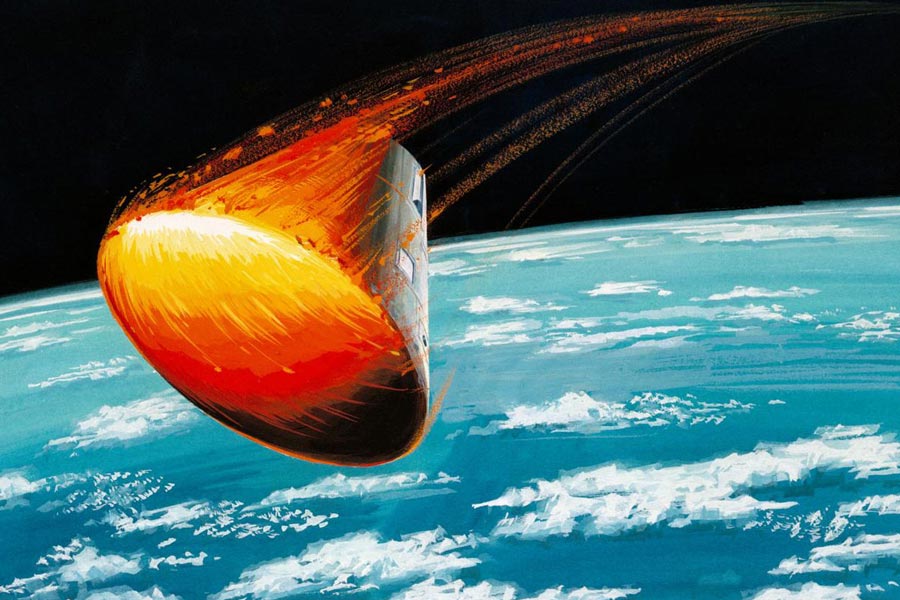 Artist’s rendering of an Apollo capsule re-entering Earth’s atmosphere at a speed of about 20,000 mph, well within the hypersonic range. (Image courtesy of NASA.)

“I have two unflinching scholarly beliefs,” Gad-el-Hak said. “Fundamental science eventually, albeit in fits and starts, leads to a nation’s health, happiness and prosperity, and ‘walls’ between nations hinder that progress.”

For the last five years, Gad-el-Hak and his collaborators have studied the physics of turbulence to better understand the impact and behavior of air flows around objects that are accelerating in space. When air (or fluid) flows slowly, the flow is smooth. As the flow gets faster, it becomes more turbulent. This complex process, called the laminar-to-turbulence transition, is not fully understood. A better understanding of that transition is essential to the realization of hypersonic travel.

Technology for hypersonic flight exists but is expensive and risky largely because of the heat caused by transitioning from smooth to turbulent flows, one of the biggest challenges in hypersonic travel. The team has pinpointed the unstable phase between smooth flow and turbulent flow — called the second mode of instability — as the precise moment when temperatures peak. 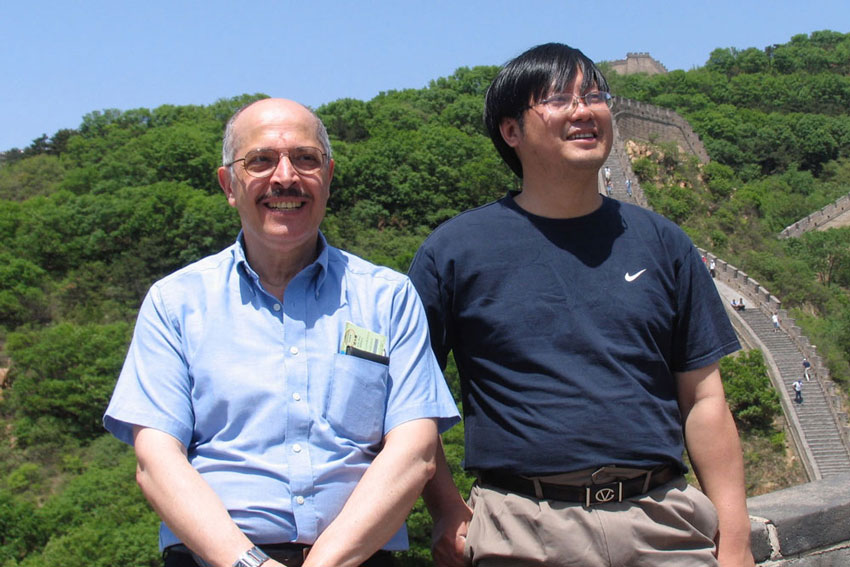 Gad-el-Hak and Cunbaio Lee, Ph.D., of the University of Peking stand on the steps of the Great Wall of China. (Photo courtesy of Mohamed Gad-el-Hak, Ph.D.)

This fundamental, new understanding has applications in the design of future spacecraft, intercontinental ballistic missiles and hypersonic vehicles — as well as future inventions.

“A distinguishing characteristic of basic research is its occasional spark to new frontiers unimagined in applied research,” Gad-el-Hak said, adding that global positioning systems, satellite radio and “a mathematical problem that metamorphosed into Google” are just a few examples of game-changing innovations that grew out of fundamental research.

Gad-el-Hak emphasized that advances on this scale, tend to come from fundamental — and not applied — research.

One reason is the longer timetable fundamental research projects enjoy.

Given sufficient latitude, “humans tend to discover what is not yet discoverable,” he said. “Organized, long-term basic research pays dividends you don’t see from the more random, shorter-sighted research model that is prevalent today. This point applies to everything from fighting diseases to fulfilling our energy need. It is much bigger than hypersonic flights or weapons.”