The business behind Hyperloop at VCU

No one eats pizza in Powhatan County when Harrison Powers is out of town.

That may be an exaggeration, but pizza consumption undoubtedly declines when Powers — who has been the sole delivery driver for the county’s only Pizza Hut for the past three months — matriculates at Virginia Commonwealth University.

The small county about 30 minutes west of Richmond has roughly 28,000 people, less than the number of students at VCU, where Powers is a rising junior in the School of Business. Powers lives in Richmond while school is in session, but he’s been spending even more time here this summer thanks, ironically, to a Powhatan connection.

“It's kind of a small town, so you get to know the same people growing up,” Powers said. One day last fall, Powers ran into fellow Powhatan native Arthur Chadwick, a rising junior in the VCU College of Engineering. Chadwick told his high school friend about Hyperloop at VCU, the student group he started to compete in the SpaceX-sponsored competition that challenges university teams to design and build the best transport pod vehicle for Elon Musk’s high-speed ground transportation system.

“It was just small talk at first, and then he [Chadwick] said he didn't have anybody for business,” Powers said. “And then that kind of evolved into, 'Can you help me with this project since you're a business student and I know you?' … And I was interested.”

After reading Musk’s white paper on Hyperloop and seeing videos from past competitions, Powers’ first thought was, “This needs to happen at VCU.” His second thought: “If Arthur's going to do it … I want to be a part of that.”

Powers became leader of the group’s fundraising team and was instrumental in raising $55,000 of the $63,000 goal.

The students started raising funds in early February, when the team became one of only 20 from around the world to advance to the final round, which will be held July 22 in Hawthorne, California, preceded by a week of pretrial testing and safety checks with SpaceX staff. 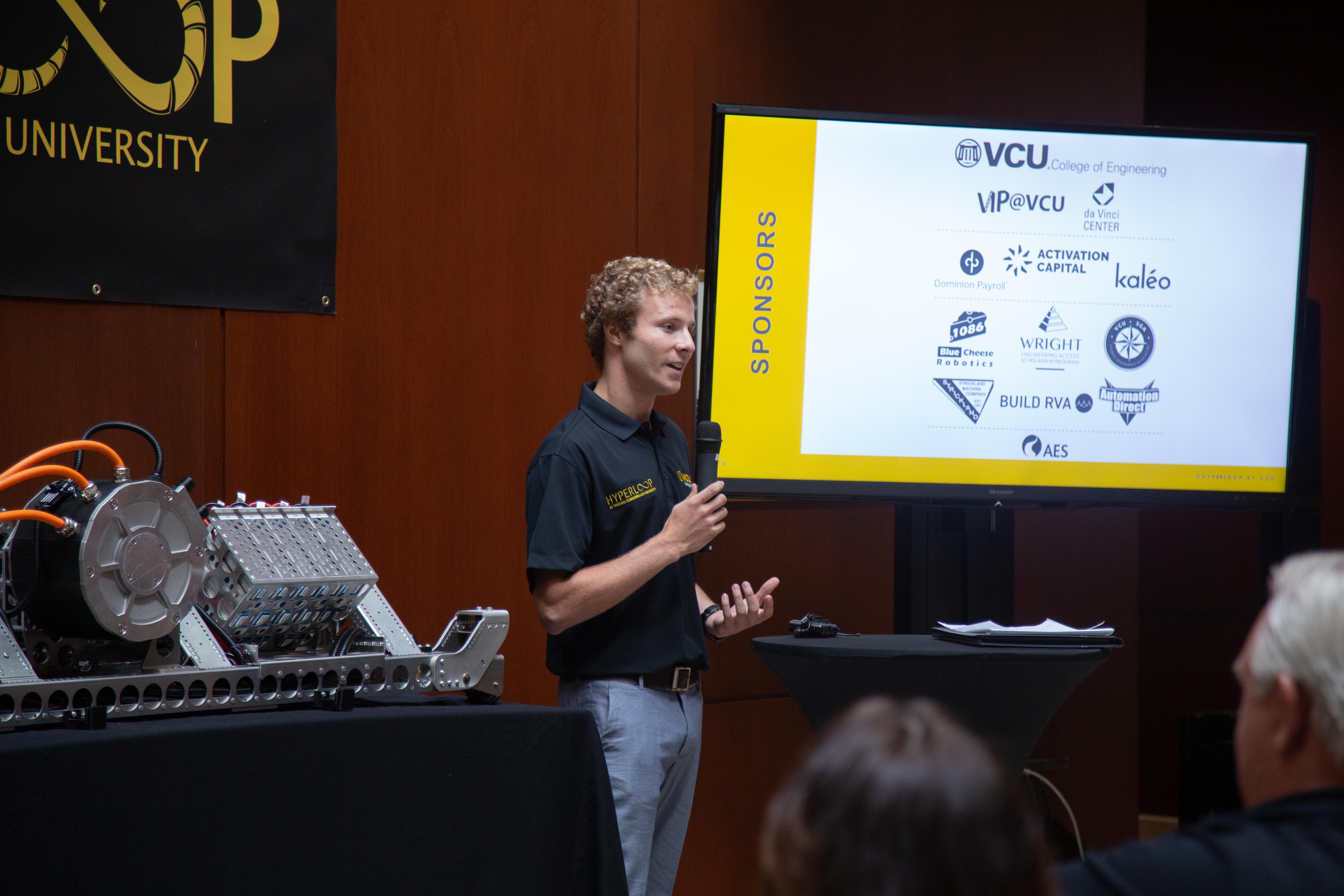 Business student Harrison Powers thanks Hyperloop at VCU's sponsors at the unveiling of the pod vehicle. (Photo by Alexandria Tayborn, VCU College of Engineering)

The first big push to contact potential sponsors came over spring break, after the team had received money from the College of Engineering through its Vertically Integrated Projects program and the Student Government Association.

Sponsors that provided materials for the pod include AES Corp. in Arlington County, Strickland Machine Co. in Richmond and AutomationDirect in Georgia. Several VCU entities donated funds, as did local companies founded by VCU alumni such as kaléo pharmaceutical and Dominion Payroll.

While the team raised a few thousand dollars through gofundme.com, Powers also planned fundraisers with local restaurants, and is already planning improvements for next year’s endeavor.

“I'm hoping next year, since everyone knows about us now, it'll be a lot better,” he said. “We're going to do the same thing next year and see what happens.”

He’s hoping that recent press will increase interest in following the team as it prepares for 2019.

“Instead of everyone coming in at the end, they're going to want to see what the process looks like and that's great, because we're going to make it better next year.

“The engineers already know the improvements that they want to make, which is really awesome. … I would love to get more companies that are really heavily in Richmond right now,” Powers said. “Like Wells Fargo is one. I'd like to get DuPont; that's another one. Rolls-Royce, they're another one that have a huge facility. I'd love for them to get on board.”

Powers is not deterred that those companies did not respond to Hyperloop at VCU the first go-round.

“When we did contact these companies, it was before everybody started giving us a lot of attention and I think we could contact them again,” he said. “We've got so much momentum right now. I was thinking of waiting until after the competition because that's when the big news is going to hit and it's going to be everywhere.”

Fundraising for the 2019 Hyperloop competition on top of his regular course load will likely occupy most of Powers’ time next year, but pizza lovers in Powhatan needn’t worry. Pizza Hut hired a second driver last week.