No one — not even Arthur Chadwick — could have known last summer that Virginia Commonwealth University had a shot of advancing to the finals of the 2018 international Hyperloop competition, the SpaceX-sponsored event that challenges university teams to design and build the best transport pod for Elon Musk’s high-speed ground transportation system.

After all, Hyperloop at VCU — the group of students from across the university devoted to designing and building a pod for the competition — didn’t exist until Chadwick, a mechanical engineering student in the College of Engineering, formed the team in September. More than 50 students eagerly joined. Today, that team, with more than 35 participants from four schools at VCU, is one of just 20 in the world to advance to the SpaceX Hyperloop finals July 22 at SpaceX headquarters in Hawthorne, California.

While a majority of the VCU team’s students are from engineering disciplines, others are from VCU’s schools of Business and Arts and College of Humanities and Sciences — including physics, math and forensics majors. About 25 students are core members and team leaders, while the others help out when they can.

“I started that and the rest is history,” Chadwick said.

In the fall, a mere two months after forming, Hyperloop at VCU advanced past the first stage of the competition, the preliminary design round. In February, the team advanced again to reach the finals this July. Hyperloop at VCU is one of only 11 U.S. teams to advance to the final round, which is preceded by a week of pretrial testing and safety checks with SpaceX staff.

While the VCU team expects its pod vehicle to reach a speed of “hundreds of miles” per hour, Chadwick said, the design and build process over the past eight months have posed some unexpected challenges. 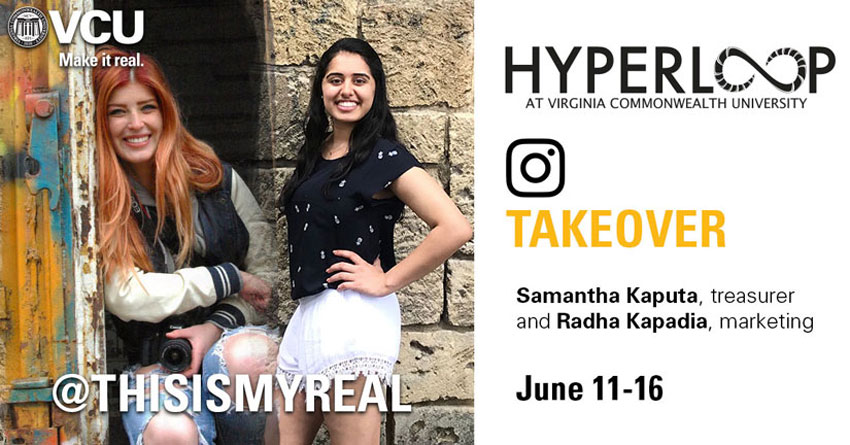 “With college students,” Chadwick said, “everyone has their own reasons to be motivated. … You realize that there's so much behind the scenes. There's a lot of planning. A lot of that isn't shown. That's been a big obstacle: making sure that things that are talked about [actually] happen. Following up, sending emails, making sure physical parts are where they need to be.”

Funding for the project has also proved challenging. The team so far has raised about half its goal of $55,000 to compete in the finals.

“It’s been a learning process,” Chadwick said. “We're not at our fundraising goal yet.”

While VCU may be a newcomer to the competition and to raising the funds to get there — most of the other finalists have existed for more than a year — Chadwick is not worried.

“We have momentum,” he said. “That is by far the biggest thing that matters with any project or any business or any organization. How effective and efficient can you be from starting at one point and going to a point where you want to be?”

As the sprint to SpaceX heats up this summer, Chadwick hopes others will follow the team’s progress and be part of that momentum.

“Our website explains a lot about who we are and how anyone from the common person to a business representative could contribute or would like to sponsor VCU's hyperloop team,” he said.

Learn more about Hyperloop at VCU.