RICHMOND, Va. (Feb. 10, 2020) — The Medicines for All Institute (M4ALL) has entered into a partnership with a manufacturer in South Africa to commercialize advances made by the institute to improve access to lifesaving medications for HIV/AIDS and other diseases.

M4ALL, which has successfully developed cost-saving formulas for key anti-HIV drugs, is based at Virginia Commonwealth University and its College of Engineering in Richmond, Virginia.

Officials at VCU and Chemical Process Technologies Pharma Ltd. (CPT Pharma) recently signed a three-year agreement outlining their collaboration. The South African company will validate and scale up processes developed by M4ALL and serve as a test site for increased production. M4ALL will work with the company to develop new processes and technologies.

“We see this as a beneficial collaboration for both parties,” said Perrer Tosso, Ph.D., global innovation manager for M4ALL. The institute seeks to have its processes implemented in low-income countries, especially in Africa. CPT Pharma does not have to start from scratch to develop new processes. “The manufacturer has the opportunity to adopt our processes and carry them through commercialization,” he said.

Both partners hope the cooperation will lead to lowering the drug costs in the local market — and ultimately, the global market. 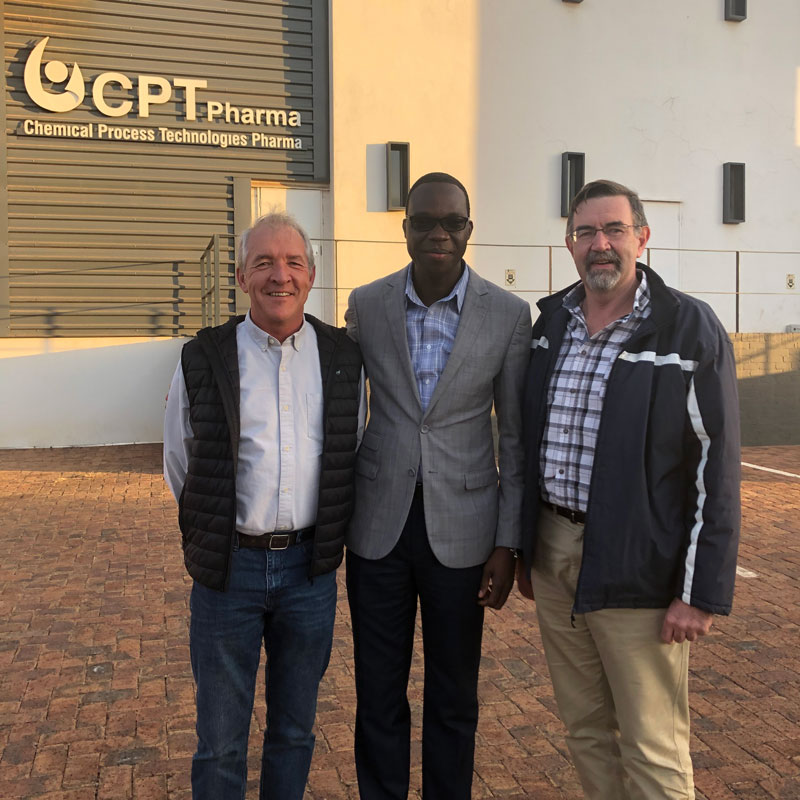 CPT Pharma, based in Waltloo, Pretoria, South Africa, is a wholly owned subsidiary of Chemical Process Technologies, which has been manufacturing animal health products and animal health active pharmaceutical ingredients (APIs) since 2001. In 2014, CPT began expanding its business into human health. With support from South African government agencies, it opened a four-story pilot plant in Pretoria to manufacture generic APIs in 2017.

Hannes Malan, Ph.D., managing director of CPT Pharma, said he was intrigued when he heard about M4ALL’s groundbreaking work on the anti-HIV medication nevirapine. South Africa is home to the world’s largest AIDS epidemic and relies on medications that are imported.

“Medicines for All’s vision of improving access to lifesaving medications by developing and commercializing technology could help make the manufacturing of pharmaceuticals in Africa a reality,” Malan said.

Malan’s company focuses on chemical process development and technology commercialization. “We understand the challenges of taking a reaction,” and deploying the final major step to scale it up, he said. “We’re extremely excited about the opportunity.”

“It is anticipated that commercializing processes developed by M4ALL in South Africa will improve the security of the supply of priority drugs, and create the institutional capacity to develop a local API manufacturing industry,” said Nelis Geyer, industry development champion for chemical products and pharmaceuticals at IDC.

One of the goals of M4ALL is to reduce global dependence on a few manufacturers while empowering other countries to be self-sufficient in providing high-quality health care to their own citizens.

The institute is also working with the government of Ivory Coast to train researchers and develop high-quality pharmaceutical manufacturing capabilities in the West African country.