VCU’s Office of Development and Alumni Relations (DAR) newsletter selected Philip O’Connor, executive director of the College of Engineering Foundation and Corporate Relations, as its “DAR-ling.” In his interview with DAR, O’Connor talks about handling rejection, places he likes to take his dog and why employers are eager to partner with the college.

Tell us about your path from Radford University to VCU.

My sister and I were the first in our family to attend college. If my parents had not pushed me to attend college, I don’t know that I would have found myself getting a degree. Conversely, my sister (the overachiever) went on to receive two undergraduate degrees, one minor, a master’s and ultimately a Ph.D. She is now a lecturer in Boston at M.I.T., Tufts and Boston College. Admittedly, I wasn’t the best student in college, but an interest in the political science curriculum provided me the opportunity to get a degree and start the next chapter(s) of my life.

If you had asked me in my early 20s where I’d be working in my mid 30s, higher education would not have made the list. As with many of my peers in fundraising/advancement, my path was purely accidental. Mainly, my careers before VCU were in some type of sales/business development role, and oddly enough, the positions and companies I worked for in the past set me up for a successful career in higher education. I’ve sold metal (MINI Coopers), helped people with their personal finances (SunTrust Bank) and sold engineering services/staffing in Richmond, Virginia (Aerotek). While none of these roles on the surface would scream “I’m going to be a fundraiser,” the skills learned in each are prevalent in my day-to-day. If anyone is ever looking for a job to learn how to handle rejection, go sell cars; I think almost everyone (myself included) has a horror story about buying a car at some point in their lives. If you want to get real personal, real fast, start asking people about their finances. Working with engineers at Aerotek, I learned how to take someone’s passion for their career and education and set them up for success in an interview. Aerotek is how I was introduced to the VCU College of Engineering and to Anita Taylor in VCU Engineering’s career services. While I didn’t hire a lot of recent graduates, Anita invited me on campus to help students to tell their story in an interview setting, review resumes and ultimately help them connect with experienced engineers in the Richmond area. A lunch with Scott Rash, then-executive director of the VCU School of Engineering Foundation, at Mojo’s was how I learned of a new role within the school, corporate relations officer. The new dean, Barbara D. Boyan, Ph.D., was looking to bring more companies on campus to recruit students, sponsor student project teams and connect with our faculty. I jumped at the chance to interview for the role, and five years later, I’m thankful for the opportunity to serve the college. 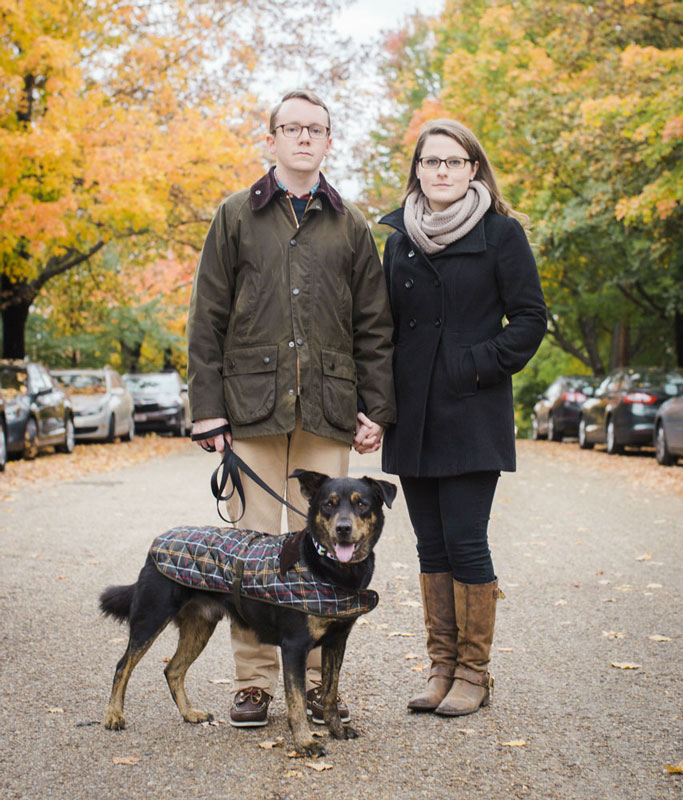 Philip O’Connor with fiancée Sara Lynch, and their dog, Mr. Black, in an outtake from their engagement photo shoot.

Five years into your career at the College of Engineering, what are some of the most valuable lessons you’ve learned about forming strategic relationships with industry representatives and alumni?

I spent the first 18 months of my career knocking on doors in town to tell our story and listening to feedback on what makes a successful engineer. While many on the outside might think that working with a university is difficult or that we’re slow to change, the faculty and administration in the College of Engineering have provided a number of pathways for companies and alumni to connect, engage and partner with our students and faculty. Coupled with a great student experience, these are a few of the many reasons VCU Engineering is growing and the number of our employer partners grows each year.

What would we find you doing on a perfect weekend?

This is a great question as Sara (my wife) and I are always asking each other the same thing. We just celebrated our second anniversary Sept. 10, and the first 18 months of marriage, Sara was in school full time and working, so this whole weekend thing is still very new to us. During warmer months, we (and our dog, Mr. Black) visit my parents in Williamsburg, Virginia, hang out by the lake and get out on the James River. With fall just around the corner, there are so many outdoor festivals and events to attend here in Richmond, and we’re looking forward to getting outside without it being in the 90s with crazy humidity. We also live in an old home in Church Hill, so the weekend usually includes a trip to Lowe’s for some type of house project.