All dressed up with somewhere to go: How this entrepreneur, transgender activist and RPI graduate lives life out in the open 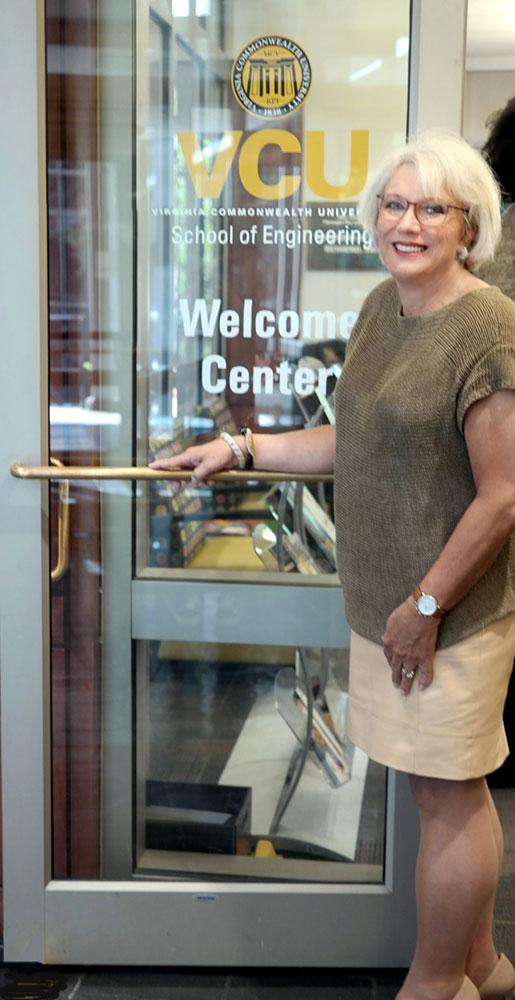 Rhonda Williams visited the College of Engineering to see how the field has changed in the 50 years since she graduated from RPI with an engineering technology degree. (Photo courtesy of Rhonda Williams.)

Rhonda Williams (A.S.’68) has lived a life of dramatic change. She left Halifax County in rural Virginia after high school for the bustling state capital, Richmond. Over the years, she forged a career in the then-nascent field of software engineering, pursued a new path as an entrepreneur, came out as transgender and discovered new skills as an activist for diversity and inclusion.

Her alma mater, Richmond Professional Institute, has gone through many changes, too. Williams’ Class of 1968 was the last to graduate from RPI before it merged with the Medical College of Virginia to become Virginia Commonwealth University. Though well-known buildings such as Office of the Provost remain, RPI’s campus, now the VCU Monroe Park Campus, has vastly expanded and changed.

Williams, however, tends to look beyond the surface. “Although it’s changed so much, so radically, over the last 50 years, it’s still got the same spirit,” she said, describing it as artistic, alive and unique.

She believes that she has kept the same spirit, too. A desire for adventure and escape motivated her long before she turned down the chance to take over her grandfather’s rural Virginia general store and instead moved to Richmond to attend the School of Engineering Technology at RPI.

After graduation, her engineering degree helped her land a position with Westinghouse Electric Corp., where she received on-the-job training in computer programming. In 1980, she started a software company, which designed PC TaxCut, the first PC-based tax preparation system, as well as the first PC-based human resource system. The HR system’s customers included Ford Motor Co., NASA and many others.

In her time studying engineering at RPI, the class included only one female student, who wasn’t Williams. (Her classmates knew her as “Tom.”) Though Williams says she spent a significant amount of her life questioning her gender identity, she began to work and interact as female much of the time just in the past two decades.

Williams likes to say she’s “all dressed up with somewhere to go.” For her, the saying is about gaining confidence to enjoy life in public despite the fear that prevents some transgender people from presenting as their preferred gender.

Williams now frequently socializes as Rhonda. “One of the reasons for being out as much as I am is to have people meet and know someone who is transgender,” she said. “Many people can be prejudiced toward a concept, especially if they don’t understand the concept. But it’s a whole different experience when someone actually has to be prejudiced or bigoted against someone who is a person that they know.”

Williams has encountered issues professionally that seem related to being transgender, though she says she’s fortunate to have avoided some of the other types of discrimination transgender people face, such as physical abuse. As a well-qualified engineer, while presenting male, Williams says, she never went on a job interview without being offered the job. Presenting as Rhonda, on the other hand, she says, it took 51 interviews over two years to get an offer — and then for a position as an unpaid intern.

She hopes her persistence can inspire and encourage others. Having benefited from support groups in the past, she founded one in 1995 in Tampa, Florida, and later started a second group in West Palm Beach. Now living in nearby Jupiter, she launched the blog Rhonda’s Escape in 2016. The blog has about 2,000 views a day and total views exceeding 2 million.

“I think her story is so empowering,” said Fred Wayne (B.A.’70/H&S; M.S.’86/HP), who retired from VCU in 2003 as a special assistant to the president and has been a friend of Williams since meeting her about 10 years ago at an RPI reunion. “I know that in my own life, there are things that I would like to have done, that I could have done, that I should have done, that I did not do. And I see Rhonda and I think, you did it. I am so happy for you.”

Wayne says that in today’s politically strained climate, Williams’ welcoming, open personality combined with confidence in herself are sorely needed.

Williams’ next chapter is another entrepreneurial adventure, this time offering corporate diversity and inclusion training. “My hook will be ‘Going through the glass ceiling — the opposite way,” she said, referring to the special understanding she’s gained by experiencing the corporate world as both male and female.

RPI, she said, laid the foundation for the entrepreneurial spirit she’s embraced throughout her life. She still comes to campus anytime she’s in the area. On her most recent trip to VCU for Reunion Weekend in April, she visited the new Institute for Contemporary Art with a group of friends and was delighted to discover a large sign that read, “You belong here.”

More than 50 years after leaving Halifax County to attend RPI, Williams is still showing the world that she belongs anywhere she chooses to go.

A walk through Engineering West Hall with Rhonda Williams

When engineer and software entrepreneur Rhonda Williams (A.S.’68) was studying engineering technology at RPI in the 1960s, three decades before what is now the College of Engineering started, there was one computer on campus. It was used for scheduling classes and recording grades. “I just wanted to get in there and touch it,” she said.

When Williams toured the College of Engineering last spring, she was gratified to see the learning resources available now. “It was wonderful to see the computer labs, the breadboards and all the innovations in computers that are taking place there,” she said. The engineering history showcase on the fourth floor of Engineering West Hall was a reminder of how far she — and engineering at VCU — have come. “That slide rule was our first computer,” she said.

Something that has not changed in the last 50 years is VCU’s commitment to educating workforce-ready engineers. Williams recalled that in 1968, engineering technology students stood out from the counterculture vibe that pervaded other disciplines. “We showed up to class already looking like engineers,” she recalled. “It was shirts and ties, and some even had a belt attachment that was like a holster for your slide rule.”

RPI’s engineering technology program armed her with tools that she used throughout her career. “The dean of the school taught a course on human relations that made a huge difference as I started my businesses. And English for Engineers: Technical Writing was the course that I have used over and over throughout my career,” she said. “Technology changes. Writing doesn’t.”

Her advice to women in engineering? “Work hard. Stay relevant. Make people take you seriously and make yourself clear," she said. "Be an engineer who can explain a concept, and you can own the world.”