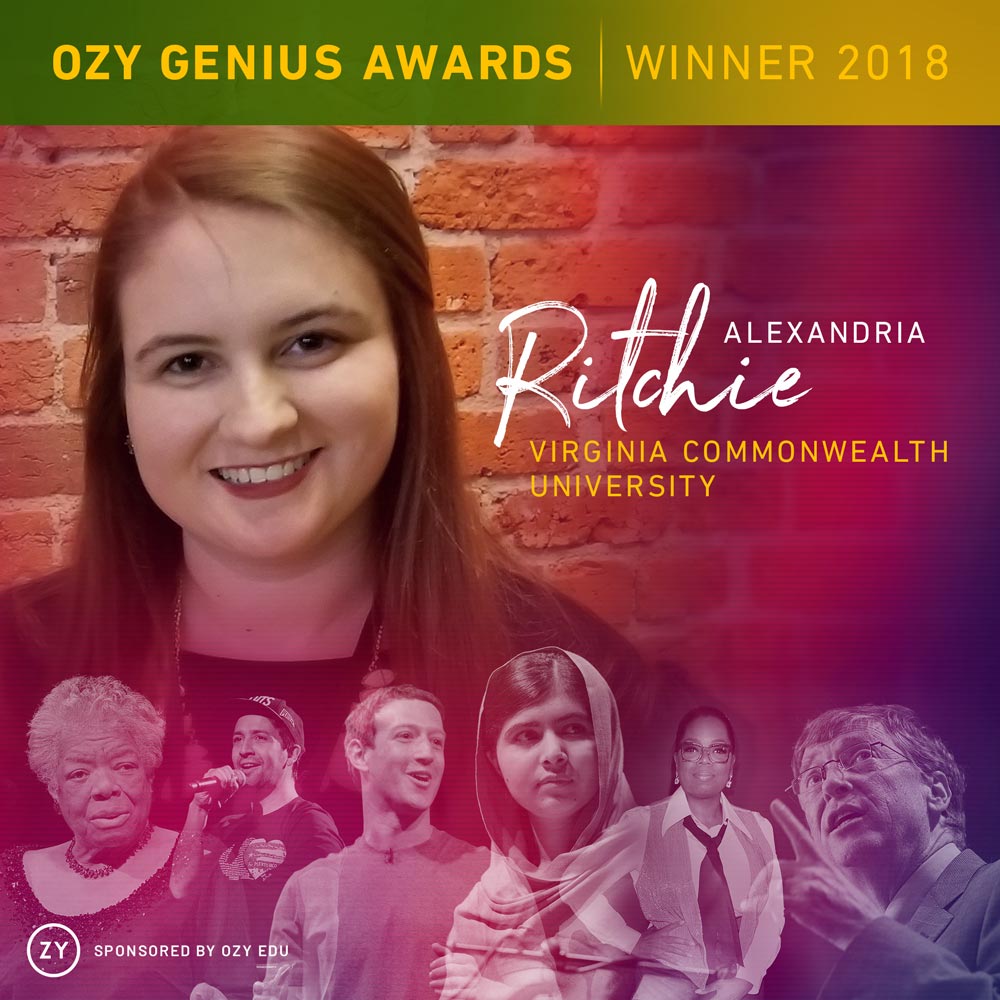 Alexandria Ritchie, a 2018 biomedical engineering graduate of the Virginia Commonwealth University College of Engineering, is one of 10 OZY Genius Award winners selected nationally for her idea to develop a pressure-sensing epidural needle device.

Ritchie will win up to $10,000 and be paired up with a mentor to take the project to the next level over the summer. This is the third annual year of the awards that seek to help college students bring their groundbreaking ideas to life. OZY, founded by former CNN/MSNBC anchor Carlos Watson, is a digital publisher that profiles people and technology that are ahead of their time.

Ritchie, who graduated this month, is thrilled. “I was very surprised,” she said. “To win a national award and find people who want to help us is just very humbling.” She plans to begin a premedical graduate certificate program at the VCU School of Medicine in the fall.

Ritchie said she was inspired to pursue the medical field in part because of a tragic experience her mother previously went through with a labor and delivery. In the spring of 2016, Ritchie joined the Engineering Critical Patient Care team, advised by Bennett Ward, Ph.D., an associate professor at the VCU College of Engineering, which seeks to improve critical patient care provided by anesthesiologists and nurse anesthetists through various engineered solutions.

“I knew they had a strong relationship with the VCU Health system,” she said. “It was a good way for me to get a sense of what that environment was and what the needs were. Working to find an actual answer to improve the patient experience felt right up my alley.”

The team is one of several in the prestigious Vertically Integrated Projects (VIP) consortium. VCU is Virginia’s only school in the consortium, which allows early undergraduate students to work with graduate students and faculty on complex, multidisciplinary research projects over several years. The Engineering Critical Patient Care team includes members from the Department of Nurse Anesthesia in the College of Health Professions at VCU and the VCU School of Nursing. In addition to other biomedical engineering majors, Ritchie’s group included students from mechanical engineering and biology in the VCU College of Humanities and Sciences.

Ritchie volunteered to lead a new project to revamp the way an epidural — a common procedure during labor and delivery — is administered. The precise location to deliver epidural anesthesia safely is so small that it is easy to miss, and they are misplaced about 13 percent of the time, Ritchie said. Pushing the needle past the epidural space can result in leaking spinal fluid, headaches and discomfort for the patient.

The first step was learning all they could about epidurals. The engineering students even tried to get a feel for what it was like to deliver an injection by delivering shots to melons, she said.

“We knew we wanted a pressure sensor that could communicate with a microcontroller and display the pressure values,” Ritchie said. The device, called DuraSafe, would provide a visual alert to let an anesthesiologist know when the correct location was reached and the medication could be inserted. During the summer of 2016, Ritchie and fellow biomedical engineering student Aayushi Agarwal worked extensively on the project through a VIP internship. Experimenting with several different design concepts, the team came up with a final design and developed working prototypes.

Their device, designed to replace the syringe, attaches to the needle and provides visual feedback to the anesthesiologist when the needle has reached the correct location so the clinician can accurately and efficiently administer the epidural.

“It’s a real problem that can be solved,” said Aaron Forrester, M.F.A., a da Vinci Center faculty member who co-led the Pre-X program. He added that the team members were motivated by “a genuine desire to fix something.”

Through the Pre-X program, the group learned about business model development. Ritchie said,  “As engineers, we did not have a lot of experience — that was a bit of a learning curve for us. At the end of it, we had a full business plan.” The team also gained experience in presenting their idea as a marketable concept.

Ritchie was one of four students given the opportunity to deliver a 5-minute pitch to compete for $25,000 in funding at a Demo Day on April 5, 2018. Ritchie recalled that she felt nervous before making the presentation. “I didn’t know how well an audience would receive it,” she said.

Forrester said, “She went up and nailed it.” He added that he was impressed by “her willingness to push through in areas that were not necessarily her specialty.”

The result? Of the 18 finalists at Demo Day, Ritchie’s team won the highest amount of funding. The amount has not yet been made public.

Having a business plan in hand also helped when Ritchie applied for an OZY award. During the process, Ritchie was interviewed by representatives from OZY and was asked about plans for how she would use the funding and who her ideal mentors would be. This year's judges were Arianna Huffington; Neil Blumenthal, a founder of the eyeglass brand Warby Parker; Karan Khemka, a partner of The Parthenon Group; Aria Finger, CEO of DoSomething.org; and Matthew Mugo Fields, a senior executive at Houghton Mifflin Harcourt Company.