VCU Sets Alumni on Path of Entrepreneurship and Emerging Technology 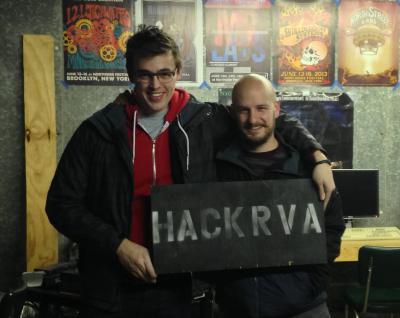 VCU School of Engineering alumni Luke Libraro and Skylar Roebuck are cofounders of Rocket Wagon, a rapidly growing Internet of Things consultancy firm based in Chicago.

Through the addition of sensors to objects, “we create new data, opportunities and experiences that allow us to completely re-imagine businesses and unlock opportunities for our clients,” said Roebuck, the chief digital officer. “At Rocket Wagon, we do this every day — we're makers who create products that transform entire industries.”

Libraro, the company’s chief technology officer, said, “By making everyday objects ‘smart’ and connecting them to the internet, IoT is making people’s lives easier and their businesses more agile in very significant ways.”

Libraro and Roebuck first crossed paths as computer engineering students a decade ago. Together, they went on to launch HackRVA — one of Richmond’s longest-running makerspaces — and teamed up at several other startups before launching Rocket Wagon.

Rocket Wagon works with companies to develop cutting-edge strategies to take advantage of the power of connected devices. The firm also provides end-to-end delivery of the IoT solutions they dream up. “IoT requires a large number of skill sets to drive real value,” Roebuck said.

One of Rocket Wagon’s longstanding clients is the college and university retailer, Barnes & Noble College. Rocket Wagon came up with a solution to avoid the situation when customers go to the store only to find the book they need is sold out. The company developed a mobile app that allows students to scan a barcode on the bookshelf to automatically order the missing book online. Piloted at stores in Chicago, the app is now being used at 750 Barnes & Noble College bookstores nationwide — including at the VCU bookstore.

Libraro and Roebuck, who graduated in 2010 with undergraduate degrees in computer engineering and minors in computer science, credit VCU with teaching them a critical combination of hardware and software skills. They have maintained ties with the university — Libraro previously taught a computing class at the VCU Brandcenter, teaching advertising students to develop interactive experiences, and Roebuck serves on the external advisory board for the Department of Electrical and Computer Engineering

While at VCU, they also caught the entrepreneurship bug.

Libraro said, “This is our fourth company together. I really like the breadth of skills you have to employ in a startup. The structure is so horizontal — there are not enough people to do all the work that needs to get done, so I’ve been able to broaden my skill sets. As the first full-time engineering hire at a startup in Glen Allen, I had to design hardware, write firmware, optimize for manufacturability, batch process all of the data from our connected devices and develop ways to connect and visualize our data. I got five years of experience in less than two.”

Richmond’s lower costs also helped inspire them nearly a decade ago to found HackRVA, which is currently located in Scott's Addition. “A lot of things about Richmond are so great,” Libraro said. “That’s why we started HackRVA. You can bootstrap a business very easily because you can afford rent.”

Rocket Wagon, which they founded with chief executive officer Phil Perkins in 2015, has already grown to 30 employees. The company recently announced a 10-member advisory board boasting luminaries from the IT world, including current and former executives from Comcast and Deutsche Bank, among others.

It’s also beginning to expand into other cities. “Richmond would be fantastic,” Roebuck said. “We would love to open an office there.”