Growing up in Virginia Beach, Corey Sutphin rarely ventured outside of the Hampton Roads area. In fact, a trip to North Carolina to visit his grandfather was the only time he breached the Virginia state line as a kid. His journey to Richmond to attend Virginia Commonwealth University was a near-epic one in the context of his youth, and he kept his travel to modest distances through his first three years in college.

One bone-chilling night last fall, however, Sutphin found himself wandering the picturesque streets of the Old Town quarter of Edinburgh, Scotland, as part of a hardy group of revelers who had hours before been the featured choral performers at Greyfriars Tolbooth and Highland Kirk, a fabled parish church that dates to 1620. The presence of new friends paired with the lingering adrenaline from the concert made the haunted, medieval atmosphere of historic Edinburgh all the more vivid and powerful.

“That was a night that I don’t think I will ever forget,” Sutphin said.

The experience was part of a semester in Scotland for Sutphin, a computer science major in the VCU School of Engineering. During his time there, Sutphin studied at Heriot-Watt University in Edinburgh on a Gilman Scholarship, a U.S. Department of State grant program that provides funding for college students to study abroad.

“I loved the whole experience so much,” he said. “I miss it already.”

Although Sutphin’s travel experiences had been minimal before his stint in Scotland, he had long been aware of a chronic case of wanderlust. As his time at VCU grew shorter, he decided to take the leap and seek study abroad options while he still had them. He worked with the Global Education Office and the National Scholarship Office to apply for the Gilman Scholarship.

“I felt as though I would be missing out on a really vital experience if I didn’t do this,” Sutphin said. “When else in my life am I going to get the chance to not only travel but to study at another institution?”

Heriot-Watt offered the ideal combination of a locale that intrigued him and an academic curriculum that complemented his studies in the School of Engineering. Sutphin needed upper-level computer science courses for his VCU degree, and the Scottish university offered the necessary electives and “an amazing artificial intelligence learning program,” Sutphin said.

“It’s creative,” he said. “When you hear people talking about computer science, you don’t imagine it to be a creative field. You just picture someone sitting in front of a computer screen. But you’re creating software, algorithms, visualizations, everything that people use every day, and it’s all coming from your brain. I think that’s kind of what draws me to it. I can be creative while also being logical. It’s awesome getting to combine those two.”

Sutphin said much of his work at Heriot-Watt focused on automated planning, a component of artificial intelligence that involves developing computer programs to achieve a defined goal. Sutphin studied the process of building a set of rules for a simulation that models a scenario and produces data. Through a series of conversations with a Heriot-Watt professor, Sutphin also grew increasingly interested in natural-language processing, which focuses on interactions between computers and human languages.

Sutphin made sure to balance academics with travel so that he could see as much of Scotland as possible. He also gave himself a couple of weeks before classes started to visit Italy, Switzerland, Slovakia and the Czech Republic.

For Sutphin, the Scottish Highlands represented the pinnacle of his trip. The sights during a daylong bus tour, complete with stops for hikes through the heather, astonished him.

“I’ve never seen anything like that before in my life,” he said. “The hills were fantastic — so beautiful it took my breath away.”

From the outset, Sutphin was determined to make the most of his time at Heriot-Watt, including meeting and interacting with a diverse mix of students. He joined both a choir and an a cappella group, and he made other efforts to form connections, such as cooking a family-style dinner for his roommates once a week. Among the international student body, he made friends from Europe, Asia and Africa.

The relationships he forged were both rewarding and fortifying.

“I’m much more confident than I was when I left,” Sutphin said. “I have a lot more faith in myself to handle any situation that life throws at me. Being able to orient myself to a new place and to talk to new people, these are really valuable skills. I think you open up so many more opportunities when you’re confident in yourself and don’t have any problem taking the initiative and talking to people, so that’s something I’m carrying through with me that Scotland gave to me.” 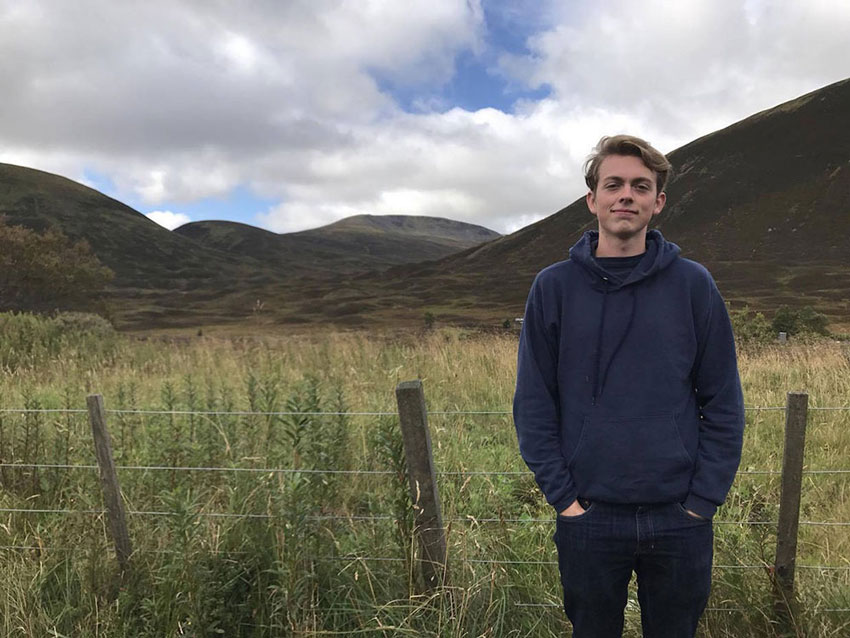 Corey Sutphin at the entrance to the Scottish Highlands.

Sutphin said his increased self-assurance has already yielded results. He credits it with helping him land an internship doing data science work at a Colorado company this summer. He secured the internship through a long-distance interview conducted while he was still in Scotland.

Sutphin said his experience has inspired his family members to reconsider their aversion to travel. They had been unable to comprehend his desire to study abroad, he said, but now they are increasingly interested in what’s out there. Sutphin said his mother is talking about going to Washington, D.C., for the first time.

Meanwhile, Sutphin is eyeing future overseas travel possibilities. He might return to Europe, though he’s most excited at the prospect of touring Asia.

“Now that I’ve started traveling, I don’t want to stop.”