Elevated levels of uranium in water supplies are an environmental safety and health concern, but current methods of detecting it are cumbersome, costly and time consuming. Gary C. Tepper, Ph.D., chair of the Department of Mechanical and Nuclear Engineering, and Ph.D. student Brandon Dodd are addressing this challenge with a novel portable device that streamlines and expedites the way uranium in water is measured. Because their patented technology is more sensitive than current technologies, it is able to detect low or trace concentrations of uranium in water supplies.

Under the Safe Drinking Water Act, the U.S. Environmental Protection Agency sets standards for safe uranium levels in drinking water. Compliance, however, has been hampered by less-than-ideal testing procedures. “Right now, you test for uranium by taking water a single sample [of water] and sending it out to a lab,” Tepper said. “This is impractical. You need a device that takes measurements in real time. It should also be easily used across various regions of the water source because concentrations vary from place to place.” 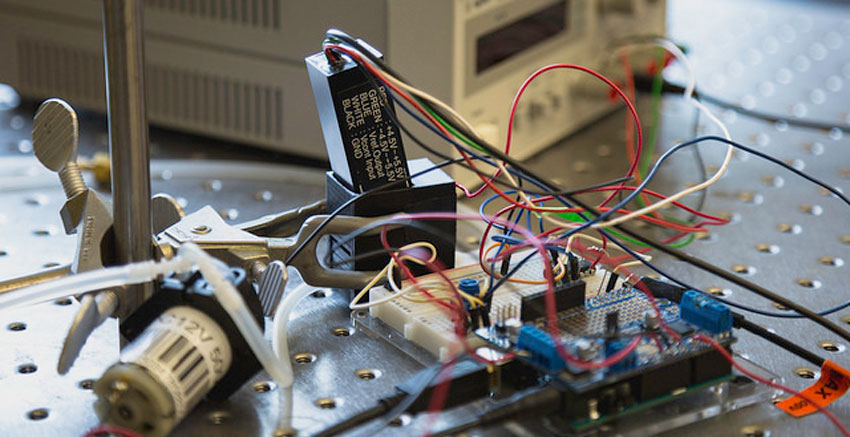 The system that Tepper and Dodd have developed uses nanoporous material to collect and concentrate a water sample’s uranium and ultraviolet light to make it visible. Because uranium compounds dissolved in water are fluorescent, ultraviolet light can be used to produce a visible signal. “But water quenches that reaction and makes it difficult to detect and quantify uranium at very low concentrations,” Tepper said.

They solved that problem by incorporating silica gel — the beads commonly seen in little packets used to keep consumer goods dry during shipping — into their system. “The uranium compounds attach to silica gel and accumulate inside the small pores. This enhances the signal and minimizes the quenching effect of water, so now if uranium is present, it lights up and can been seen in the visible spectrum,” Tepper said.

The combination of nanoporous material, light and silica gel produced a portable all-in-one system that gave readings of trace uranium concentrations. An early iteration of their device was designed to be dipped into a sample and gave a reliable reading in about one hour. Tepper and Dodd believed they could do better. They added one more component, something familiar to any mechanical engineer.

“We said, ‘Let’s get a little pump and push the water through the silica gel,’” Tepper recalled. ”Now a reaction that took an hour takes a couple of seconds.”

Tepper and Dodd hold provisional U.S. and international patents on their technology. They are working with the VCU Innovation Gateway as their device continues its path from prototype to commercial product and believe it will be of particular interest to military, regulatory agencies and agricultural industry consumers.