For students in VCU’s Pre-X program, no idea is too big or too small

David Vu, a fourth-year doctoral candidate in VCU’s School of Pharmacy, is taking part in Pre-X as he develops a mobile application to help children, especially those with autism, to assimilate to health care environments by using virtual reality.

Fast forward, and now they are among more than 100 VCU students working this semester to get their roughly 70 startup ideas off the ground with the help of the university’s pre-accelerator program, VCU Pre-X.

Children with autism spectrum disorder often have challenges with social communication and interactions, such as reading nonverbal cues, understanding emotions and processing the sensations around them. As a result, entering unfamiliar environments, such as health care offices, can cause a lot of anxiety, he said.

“As a potential solution, AnyWear VR is an immersive virtual reality app to help children with autism engage in real-world environments,” Vu said. “It allows the user to practice and familiarize themselves within these environments in the comfort of their own homes.”

The team is planning to have a full working model by mid-February. Vu is currently working with health care offices to test it.

“As evident through VCU HealthHacks, VCU offers opportunities for collaboration between different schools and disciplines, and they have the supportive culture to encourage ideas to move from the classroom to the real world,” Vu said. “Working on AnyWear VR embodies a lot of what VCU is about. Challenge the norm. Make it real.”

Joining the AnyWear VR app in the VCU Pre-X program are ideas such as an online marketplace for used guitars, a ride-sharing app aimed at college students traveling home for the weekend, a new and affordable device that kills mosquitoes and a software framework that would allow escape room companies to provide a more “magical” experience.

“I think the mosaic of ideas is exciting,” said Aaron Forrester, a faculty member with VCU’s da Vinci Center who is co-leading the Pre-X program. “To be in a room with over 100 students, each passionate about the idea they are working on, creates a contagious vibe. The room is full of people who want to be there, and you can tell.”

The university’s pre-accelerator program launched in 2015 with the goal of identifying, supporting and launching high-growth and high-potential startups led by VCU students. Teams from the program’s first four cohorts raised more than $2 million in investment and revenue, and three VCU student-run companies went on to be accepted into Lighthouse Labs, the Richmond region’s startup accelerator program.

This semester, the VCU program was renamed Pre-X and has shifted to a new model in which all VCU students who meet the minimum requirements will be able to access the program’s curriculum, tools and mentorship. As they progress through the program, participants will have to meet benchmarks and compete with one another for funding.

Open to all VCU students, including undergraduates, medical students, executive M.B.A. students and anyone else with a killer idea, Pre-X provides participants with an opportunity to benefit from a $30,000 fund, a wide array of industry mentors and the option to earn academic credit.

The program is administered by the da Vinci Center, a collaboration of VCU’s schools of the Arts, Business, Engineering and College of Humanities and Sciences that advances innovation and entrepreneurship through cross-disciplinary collaboration.

The idea behind Pre-X is to support VCU student entrepreneurs and innovators as they seek to take their concepts from the early stages of idea formation to actual business development. Throughout the semester, the teams will compete with one another to continue on, culminating with a Demo Day event on April 20 in which the teams deemed by mentors to be the best of the best will pitch their concepts before a panel of judges.

A Better Way to Inflate 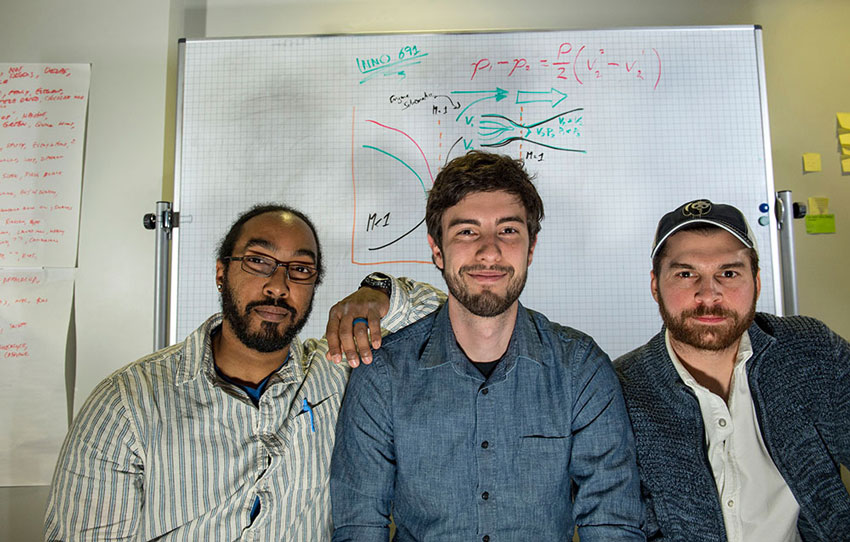 Hilton Bennett, Chris Brady and Michael Mahoney, Master of Product Innovation students in the VCU da Vinci Center, are working together to explore the commercial potential of an air pump attachment that effectively doubles the volume of air supplied and cuts in half the time required to inflate objects such as rafts, air mattresses and bounce castles. Photo by Kevin Morley, University Marketing

Michael Mahoney, Hilton Bennett and Chris Brady, all students in the da Vinci Center’s Master of Product Innovation program, are one of the teams participating in Pre-X.

They are working to explore the commercial potential of an air pump attachment that effectively doubles the volume of air supplied and cuts in half the time required to inflate objects such as rafts, air mattresses and bounce castles.

“This is a new twist on an old technology,” Mahoney said. “The Venturi effect has been used in industrial applications for years, but primarily with liquids. We are using the phenomenon to passively amplify the amount of air available to inflate devices. We hope to apply this phenomenon in a very practical way to increase the efficiency of manual air pumps by at least a factor of two, hopefully more. More air per pump means less time and work for our end-users.”

The team is exploring the device’s potential as part of Pre-X and also as a capstone project for their master’s degree.

They are also working with the U.S. Navy to develop a specialized device for the Navy SEALs as part of an initiative called Print the Fleet, which involves introducing 3-D printing to the fabrication and maintenance process for its fleet of ships to save time and cut costs.

“We are looking to commercialize this for applications where inflating devices is either difficult, time-consuming, or both,” Mahoney said. “We are also looking to develop and 3-D print other specialized parts for the Navy where large bulk orders wouldn’t make financial sense.”

Arthur Striker, a senior majoring in mechanical engineering, came up with his Pre-X idea as a result of his interest in working on older cars.

“I have run into situations in the past where I need a specific part that not only is no longer being produced, but is all but impossible to find in salvage yards or from online salvage sources due to either the initial scarcity of the vehicle or due to the present scarcity as a result of attrition,” he said.

It occurred to him that it would be helpful if he and other car restoration enthusiasts had access to modern 3-D models of out-of-date parts that he could 3-D print as close to the original specifications as possible.

Such an idea, he realized, could also be useful for many different types of machinery that might need replacement parts.

“My end goal is to have a company that provides 3-D designs and 3-D-printed parts for any type of machinery or mechanism for which production parts are no longer available,” he said.

Initially, Striker intends to focus on 3-D scanning obsolete parts and then fabricating the replacement parts through traditional manufacturing. Down the road, he plans to use advanced 3-D printing technology to produce the parts.

An Ax-Throwing League for Richmond 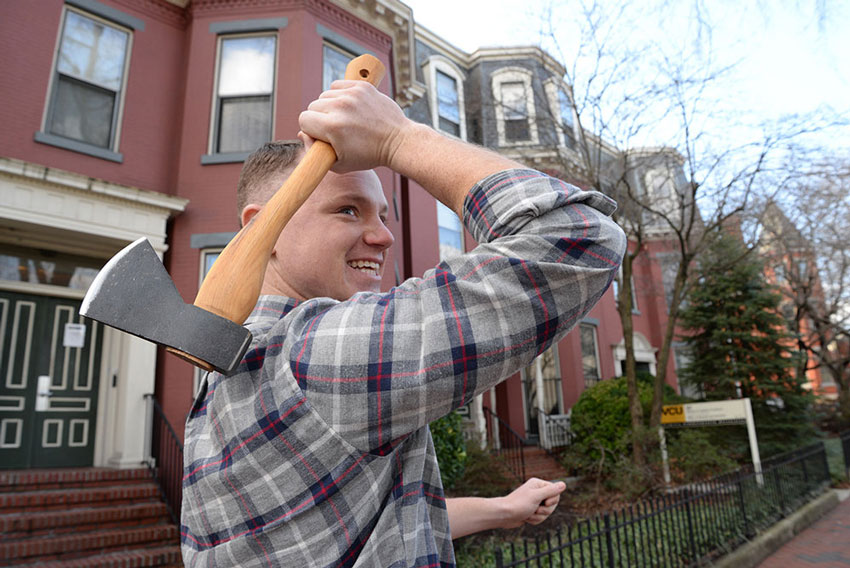 Shane McNamara, a junior majoring in mechanical engineering at Virginia Commonwealth University, was at the Central Virginia Celtic Festival & Highland Games at the Richmond Raceway a few years back when he found himself drawn to an ax-throwing booth.

“I was standing there and watching these guys throwing axes,” he said. “So I went home, bought some axes from [The] Home Depot, learned how to throw them and thought, ‘Hmm. This could work.’”

“My idea is we could have a league for people who are really dedicated to it and love throwing axes. We could host competitions, events, corporate team building and that kind of thing,” he said. “The term I'm using for marketing purposes is experiential entertainment. Like bowling … [but] I want to replace it with something cool, like ax throwing.”

It’s the experience that counts

The wide range of projects in this year’s Pre-X program reflect the diversity and creativity of VCU’s students and the opportunity for good ideas to come from anyone, no matter the major or discipline. In many cases, students witness firsthand the benefits of collaborating with students from different fields.

The program also shows students that even projects that ultimately fail have plenty to teach them along the way.

While researching his ax-throwing league concept, McNamara discovered organizations such as the World Axe Throwing League that outline safety regulations and offer standardized rules and regulations his league could follow. He also saw an article in The Wall Street Journal describing how urban ax throwing was becoming a trendy corporate team building activity.

“I thought it looked like a lot of fun and that it’d be a good fit for Richmond,” he said.

Whether McNamara’s ax-throwing league comes to fruition or not, he said his time working to give it a shot in Pre-X has been invaluable.

“If this flops, I won’t be in bad shape,” he said. “I’ll still have had the experience of trying to get it off the ground. It’s really cool to see how Richmond and VCU is in a situation where it’s becoming a hub for entrepreneurial activities. I wanted to be in that scene.”