Building a sustainable urban park – from the ground up

Alot goes into building a sustainable city park, as any student in Chris Gough’s and Stephen Fong’s interdisciplinary elective course will tell you. From the plants to the soil itself, helping a Virginia museum prepare to build an urban park from the ground up has been the capstone project of more than 20 Virginia Commonwealth University students from the College of Humanities and Sciences and College of Engineering this semester.

Last week, those students presented their data, concepts and vision for the park to Fong, Ph.D., a professor in the Department of Chemical and Life Science Engineering; Gough, Ph.D., an associate professor in the Department of Biology; and Tyler Holtzman, a horticulturist at the Science Museum of Virginia in Richmond. Fong and Gough have teamed up before for an interdisciplinary course creating sustainable spaces on campus, but this project took students out into a new part of the community. 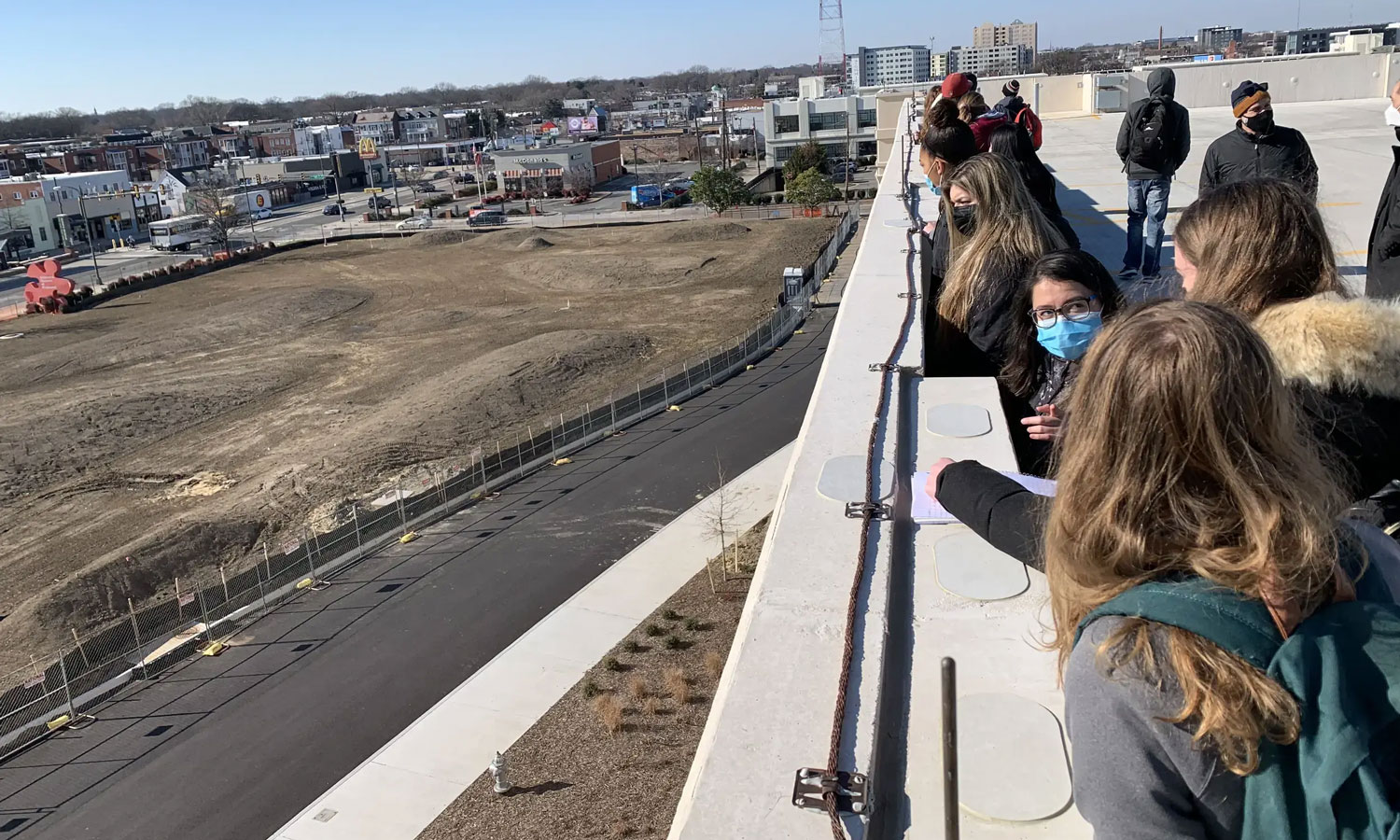 Early this semester, students from the College of Humanities and Sciences and College of Engineering look over the Science Museum of Virginia's lot, a space for which they would be preparing recommendations around the soil, nutrients, water, plants and educational elements the Science Museum could use when the space is open to the public. (Courtesy of Chris Gough)

The students’ research will help inform work underway at the Science Museum of Virginia toward returning a 2-acre former parking lot at the corner of Broad Street and Terminal Place in Richmond to a more natural state. It’s part of the Science Museum’s development of The Green, a 6-acre public greenspace which, the museum shares, is aimed at reducing the impact of land use, mitigating the effects of climate change, offering opportunities for education and improving community health and well-being.

The students’ projects, built around these goals, included recommendations for the design and implementation of a spiral garden prototype, the testing of soil’s pH balance and suitability for planting, the development of a rainwater catchment system for irrigation, the creation of an educational website with information on trees and a list of plants that provide the greatest amount of environmental benefit.

Holtzman said he appreciated getting a fresh perspective from a younger generation and enjoyed partnering with the course’s professors and students.

“We’re fortunate to be able to utilize resources from a university with a great engineering and biology department while also offering students the opportunity to work on a real-life project that is happening in this city,” Holtzman said. “I’m happy we can offer them a chance to pull back the curtain and all that goes on with a large community project like The Green.”

The soils group took to the construction site to gather soil samples, which led them to make recommendations on preparing the right mix of soils and nutrients to ensure plants’ healthy growth in the different areas of the park. When some samples didn’t come out right, they tried again. 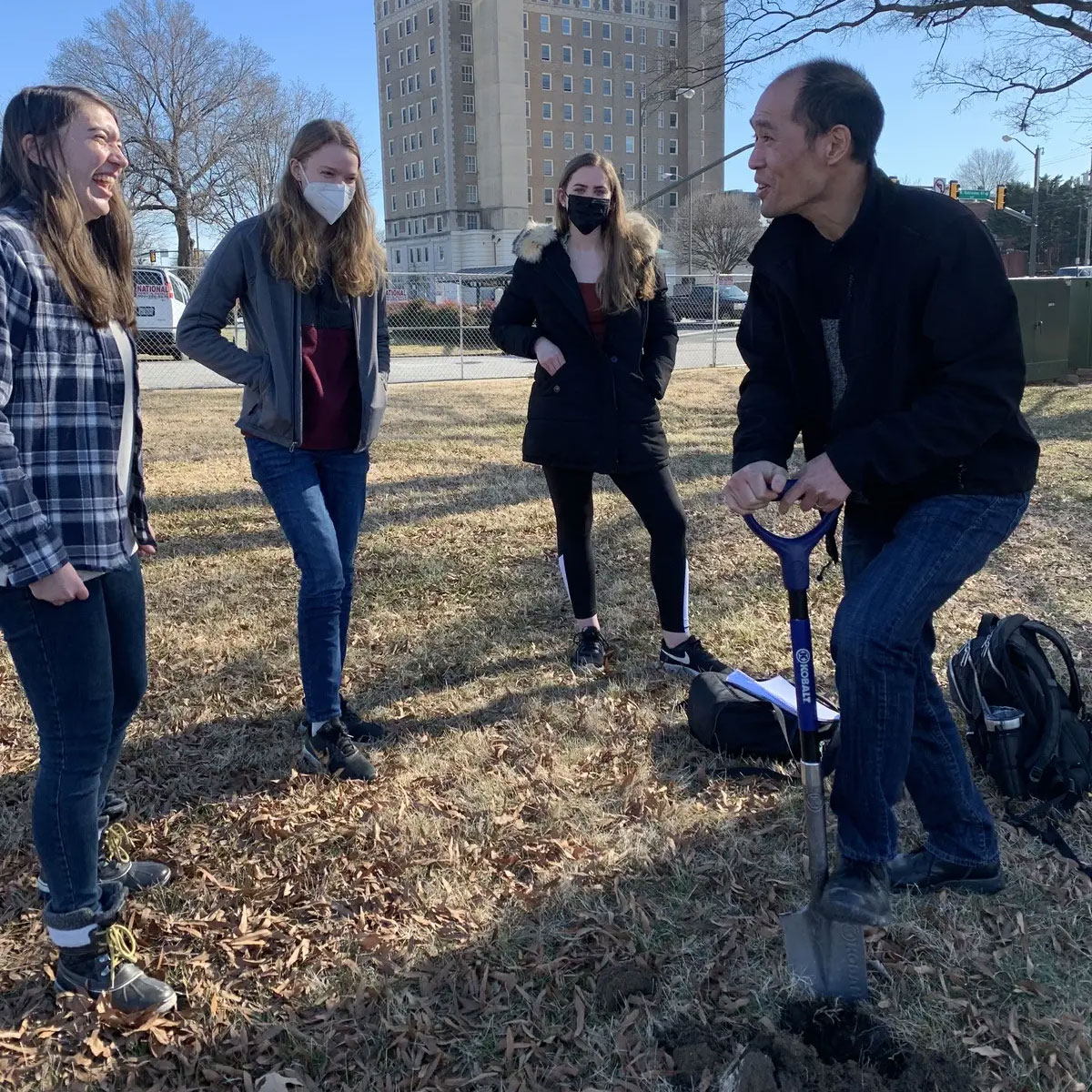 From left, students Emma Gregory, Alexandra Almasy and Tara Macintosh share a laugh with their professor Stephen Fong, Ph.D., as Fong digs into the ground in front of the Science Museum of Virginia. (Courtesy of Chris Gough)

“It’s very science-heavy, all the data collection and testing and analysis,” said Megan Nicholson, a senior majoring in biology. “We ran into a few hurdles as most science projects do, so we had to recollect data. And then considering how ever-changing the site is right now, sometimes we would sample from one spot, come back a month later and that spot would be completely different.”

When they found unexpected results, they developed hypotheses for what might have factored into those results — road salt from the plot’s decades as a parking lot, fertilizer runoff from other area properties — and offered their solutions for what nutrients different areas of the park might need for plants to thrive. The presentation prompted a discussion about what plants might do best in the soil at its current pH level.

The project was a lesson in translating data collection and information into real-world applications, Nicholson said.

“There were a lot of moving parts, but overall being able to see all of that data at the end of the day was very satisfying,” she said. “That was really fantastic.”

A group of students, using a space and structure at VCU’s Community and Learning Gardens, developed the concept for a water catchment and distribution system using rain gutters, a barrel and a hose to drip-irrigate the plants for a form of automatic watering.

Their rain barrel would capture about 61 gallons per inch of rainfall, they said. If implemented, the group estimated it would save the museum more than $100 per year to water its plants.

Gough applauded the students’ efforts, sharing that their work had paved the way for future partnerships with the learning gardens and acknowledging the lessons, such as learning the approval processes for a real-world project and factoring in supply-chain delays, they had learned along the way.

With the museum planning to incorporate trees native to Virginia into its space, four more students prepared educational materials about those plants, including a plant scavenger hunt and a website with Virginia trees and the amount of carbon they store.

The carbon sequestration of a serviceberry tree, for example, 10 years after it is planted would offset carbon emissions roughly equal to driving a car 6,000 miles, the group shared. 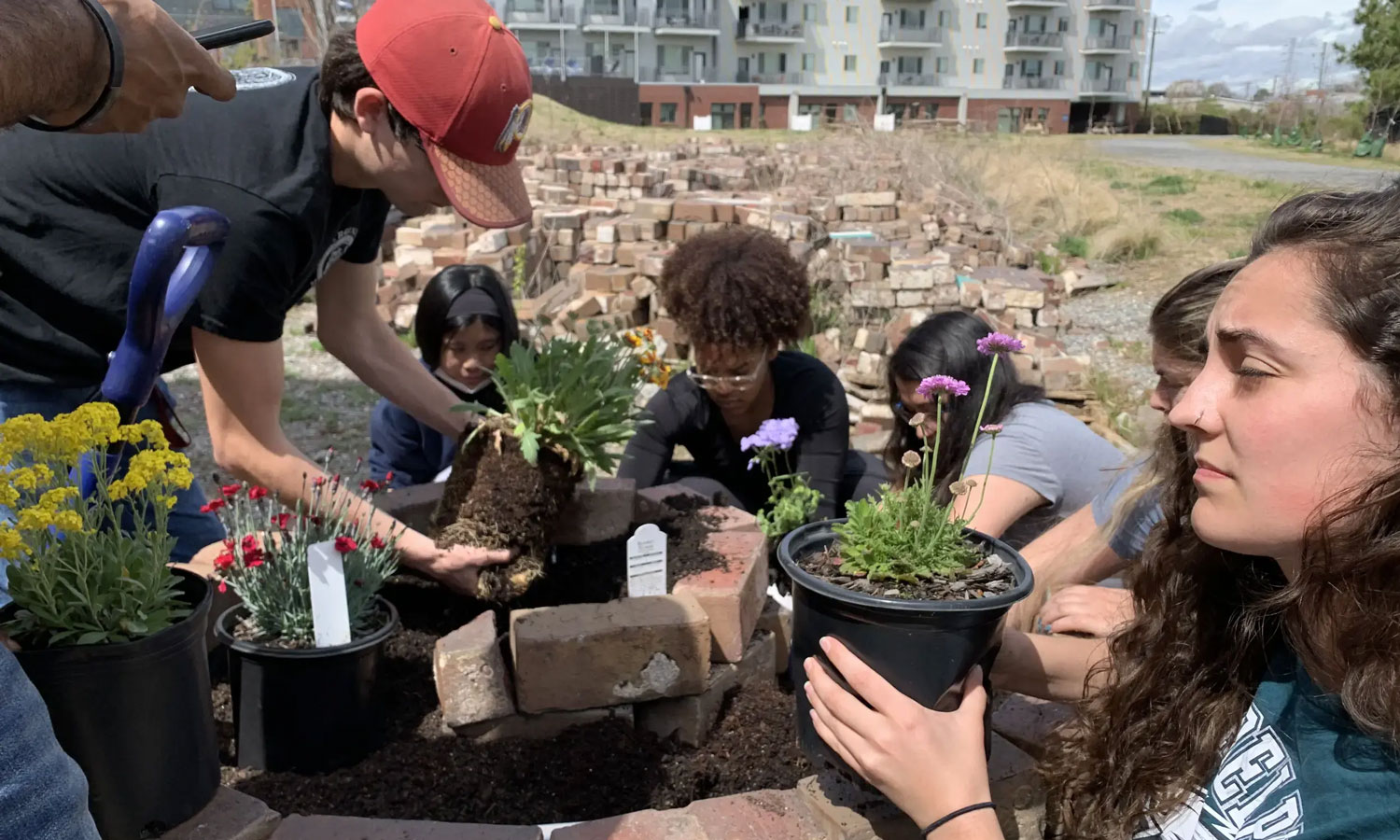 Students from Chris Gough and Stephen Fong's class add plants native to Virginia to their spiral garden. The planter was built with reclaimed bricks and sits along the Protopath, a public pedestrian path connecting Leigh Street to Terminal Place along the west side of the Science Museum of Virginia. (Courtesy of Chris Gough)

“When I reflect on what a capstone is supposed to be, you were doing exactly what, really, I would want, which is assimilating lots of information going from good reputable sources and making it accessible to park guests and visitors to the Science Museum,” Gough said about the presentation.

Kaleyah Volk, a biology major who was part of the plants group, reflected on what has stayed with her throughout the course of the semester, recognizing the impact the project could have in the community. “It was definitely very intriguing, seeing how you can start small and then watch a project grow on the grand scheme of things.”

“We’re both graduating seniors,” McIntosh said of herself and Volk, “and I personally will be staying in Richmond so, for me, making an impact in this community where I’m going to continue to live is really important, and being able to do that through VCU is even more significant. I think when you’re working on a project where you’re getting to change people’s lives, to essentially change the community that you live in, it’s a lot more rewarding than even just an assignment for school.”

… to a finished product

The largest group of students had taken to the museum’s ProtoPath — a pedestrian path that runs along the western side of the Science Museum’s property connecting Leigh Street to Terminal Place — to build a prototype of their planter design that would give plants native to Virginia the amount of water, nutrients, sun and shade they need. Initially, group member Sydney Nestor said, the idea was to replicate the shape of a volcano to offer a fresh take on a tiered design. 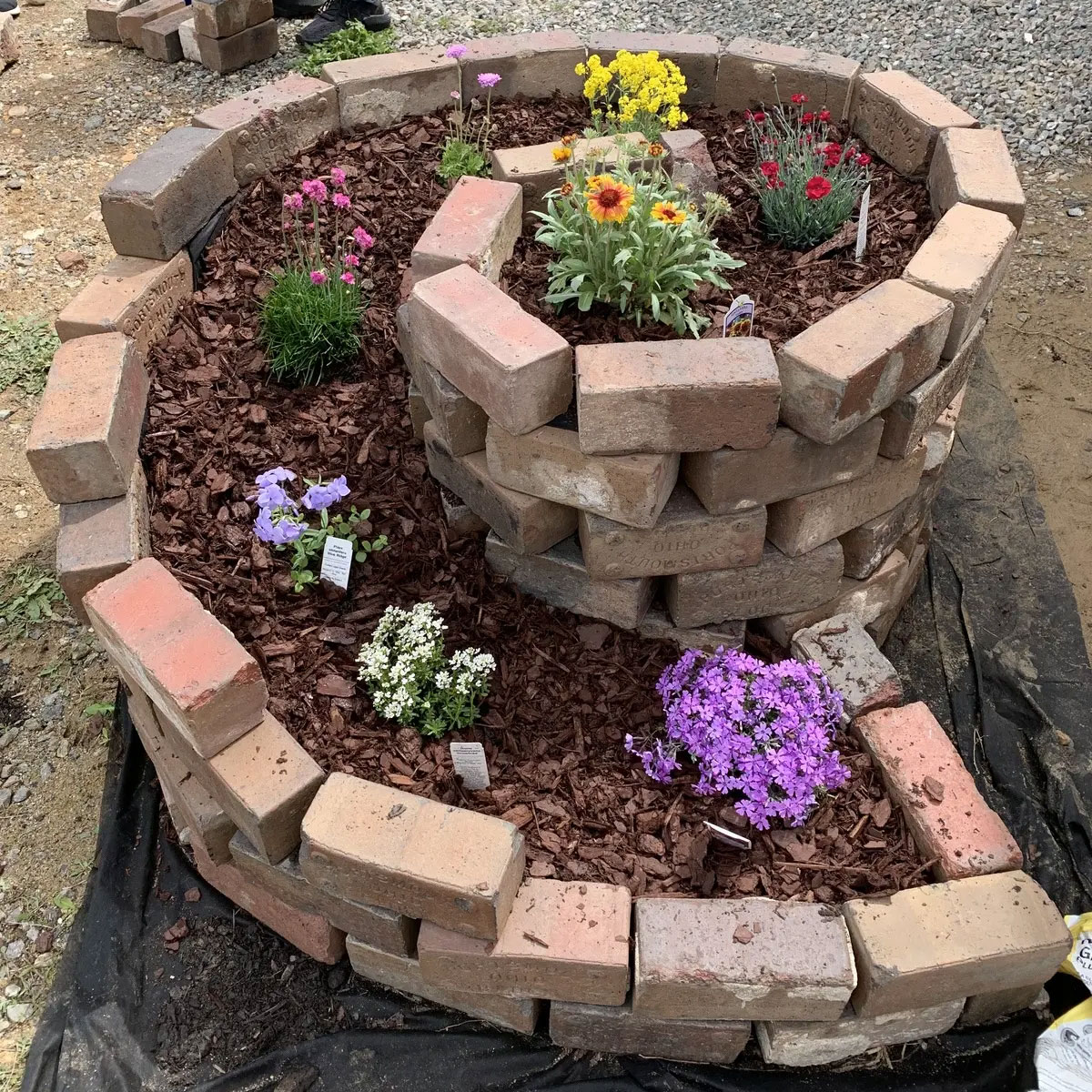 A closer look at the sustainable spiral garden built by VCU students shows the plants, chosen for their nativeness to Virginia, their preference for sun or shade and their overall environmental impact. (Courtesy of Chris Gough)

The finished product was a spiral-shaped planter, featuring sun-loving plants at the top with shade-loving plants toward the bottom, that was designed to attract pollinators and increase the oxygen output of the park. The planter reused reclaimed bricks from the Science Museum’s lot and took the group of eight students less than four hours to complete.

“We talked about the scalability,” Gough said in reaction to the project, “So next year, this could be something the next class could create.”

The presentations and work of the class were the culmination of their final projects, which Fong and Gough said would have lasting impacts.

“Hopefully doing something hands-on through this real-world experience — like this is not a theoretical made-up project where we’re making you jump through hoops just to do something — helped you see that you can get an idea, follow it through and make an impact, an immediate impact on something,” said Fong addressing the students, many of whom are slated to graduate this month. “Wherever you end up going, whatever you’re seeing, hopefully this encourages you to continue to be active, overcome all the problems that you need to overcome and make progress. You can still do something that’s really meaningful to your community.”