Senior mechanical engineering student Noah Armistead is on a mission to build an exact replica of the 8-cylinder engine found in a Ferrari 158. The only difference? His is made entirely of LEGOs.

Since childhood, Noah Armistead has long considered himself a “LEGO guy.”

Now, as a senior mechanical engineering student at the VCU College of Engineering, Armistead isn’t chipping away at your average LEGO set.

Armistead is on a mission to build a car engine made entirely of LEGOs — specifically, the V8 engine found in the Ferrari 158 race car. It is the 1964 world-championship-winning Formula One engine, of which there are only three in the world: one in Italy and two in Birmingham, Alabama. Armistead’s replica aims to mirror the engine both mechanically and visually, challenging Armistead to utilize the universally-loved small, plastic bricks for what is now his senior independent study project.

A Love of LEGO

Though originally from Virginia, Armistead spent most of his childhood and early adolescence growing up in Pakistan. His father, a Medical College of Virginia graduate, worked as a missionary doctor overseas, seeing patients in a family medicine setting.

“Growing up in a humanitarian environment is where the vision for my personal work came from,” says Armistead. “I’m not a medical care person, but I love kids and want to be able to share what I’m learning and doing with them.”

In high school, Armistead became interested in how cars and engines work, but didn’t have access to any kind of auto mechanics class, robotics team or project car. Instead, he had LEGO.

“My grandparents faithfully sent packages of LEGOs to our home in Pakistan for years,” says Armistead. “As far back as I can remember, LEGO is what I had to use when it came to exploring mechanical design.”

Armistead’s LEGO explorations continued into college and inspired his major in mechanical engineering at VCU.

Over the years, he became particularly interested in mechanically realistic LEGO engines that run on airflow, which then led him to Ferarri and his goal today: to build a Ferrari 158 engine out of LEGO with components as dimensionally accurate as possible. 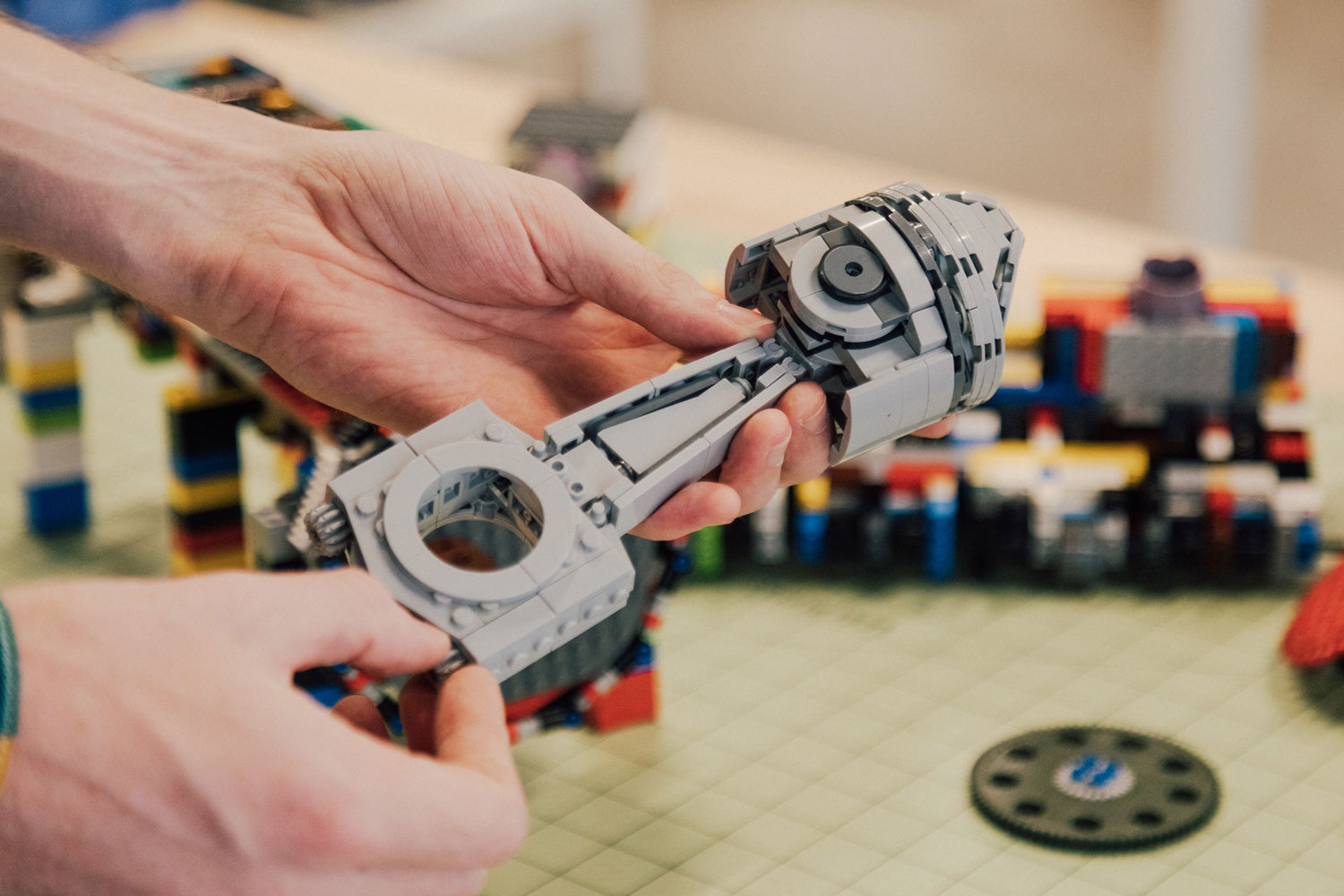 At scale replica of a Ferrari 158 piston.

In Spring 2021, Armistead approached Lane Carasik, Ph.D., assistant professor of mechanical and nuclear engineering, — a fellow “LEGO person” — about his work with LEGO engines and the Ferrari project in particular.

“I am a massive fan of LEGO and have been since I was a child,” says Carasik. “I've used LEGOs as a way to explore my own creativity in design and to come up with solutions to problems I want to solve. They are an amazing teaching and outreach tool for STEM and a way for students who I teach or mentor to directly apply their engineering design skills in a low-risk format.”

Together with Carasik as his project advisor, Armistead is completing the LEGO engine build this fall as his VCU Engineering senior independent study project. He will earn three academic credits for the work.

“Noah has impressed me since I first taught him in my fluids mechanics class,” says Carasik. “Through this project, I want Noah to learn some useful skills for his future in automotive engineering, maybe even a future LEGO Master Model Builder. ”

Armistead’s design process is a combination of physical prototyping and designing on a software called Studio. In order to make his model, a 1.5 liter engine just like the original Ferrari, Armistead made a displacement calculator in Excel to tune the dimensions of components, working within the limitations of LEGO part sizes and 3D printing only if necessary. He will utilize engineering software like SolidWorks for stress and flow analyses, as well as more mechanical animation features.

“I’m in love with the LEGO medium as a way of doing this research,” says Armistead. “No one has created an internal combustion engine out of LEGO yet. It would be amazing to be the first one.”

In addition to exploring the capabilities and limitations of plastic engine design through the build, there is an educational component to Armistead’s senior project that relates back to his own interest in LEGO and mechanical engineering at a young age. At the end of the semester, Armistead will showcase his project in local Virginia school systems with the hope of inspiring students to chase their own curiosities.

“The goal is to catch the attention of kids using LEGO and get them excited about engine design,” says Armistead. “I envision doing a full teardown demonstration of the engine in front of students and explaining how the engine works part-by-part. I want kids to be inspired to use what they have to create their own designs.”

Armistead will also showcase his work at Mission Tomorrow, a career exploration event hosted by Chamber RVA that reaches about 12,000 8th graders from the greater Richmond region.

“It's really nice to see LEGO still has a way of inspiring students and future engineers,” says Carasik. “It’s a great teaching tool and I want to encourage any students who want to use LEGO as a creative design tool and a way to do outreach to K-12.”

In addition to sharing his project locally, Armistead has already begun conversations with national organizations like the Barber Vintage Motorsport Museum and LEGOLAND, and he plans to attend LEGO conventions. It is his hope to share his work in spaces that celebrate his unique mission and what he has been able to accomplish. With the announcement of The LEGO Group’s new factory in Chesterfield County, Armistead feels it is more relevant than ever to share the details of his work.

“I am tremendously excited about the LEGO factory,” said Armistead. “My grandma sent me a clipping from a newspaper article announcing the factory and said, ‘Noah, you should get a job there!’ I just laughed and said, ‘Grandma, yes, I would love to get a job there.’”

It will take hundreds of more hours and thousands of LEGO pieces for Armistead to complete his project before December 2022, and he is seeking financial support to reach the finish line.

“Much like when building a real engine, every component of the LEGO engine requires a physical prototype for testing and validation,” says Armistead. “Because this is not a static design it cannot all be modeled on the computer first before purchasing parts. The parts buying process is continuous, and each of my orders contains thousands of LEGO pieces.”

Visit VCU Engineering’s Department of Mechanical Engineering to learn more about other innovative research and projects run by faculty and their students.