The graduating engineering student, who worked at VCU’s Medicines for All Institute, wants to pursue a career in the pharmaceutical industry and academia.

Tyler McQuade saw something special in Samuel Adu-Gyamfi. Adu-Gyamfi was taking an undergraduate chemical engineering class taught by McQuade, and the professor sought him out to work in his lab.

“We hit it right off,” said McQuade, Ph.D., who teaches chemical and life science engineering in the Virginia Commonwealth University College of Engineering. “He’s a very intelligent young man, and his acumen in my class was key to me selecting him [to work in my lab]. I don’t invite anyone into my research space.”

McQuade runs a lab at the Medicines for All Institute, which helps reduce drug production costs to make them more readily available in developing countries. Adu-Gyamfi, who was born in Ghana and came to the United States as a teenager in search of a better life, found the work fascinating and was drawn to the mission of the institute.

“I do know firsthand what you’re talking about, making medicines more accessible,” he told the College of Engineering in 2019.

His move from Africa to the U.S. was challenging not so much culturally but physically. He had a hard time adapting to the weather and different environment, but knew he had made the right choice to leave his native country. 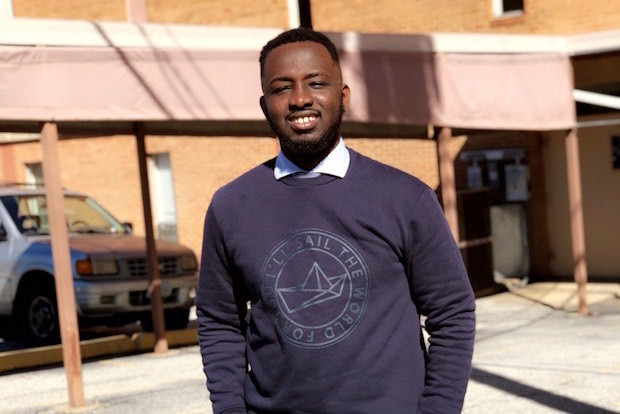 Adu-Gyamfi has been accepted into a graduate program in chemical engineering at Columbia University and plans to begin his graduate studies in the fall. (Courtesy photo)

In McQuade’s lab, Adu-Gyamfi worked in the area of organic synthesis and helped develop material to acclimate new members to the lab. He said it helped him apply practical applications to his work in the classroom. Adu-Gyamfi graduates in May with a bachelor’s in chemical and life science engineering and a minor in applied mathematics through the College of Humanities and Sciences. He has been accepted into a graduate program in chemical engineering at Columbia University and plans to begin his graduate studies in the fall.

Adu-Gyamfi attended high school in Henrico County and researched several different colleges. He chose VCU because the engineering education was research focused and fit with his goal of eventually obtaining a doctorate.

He embraced life on campus from the start, shadowing researchers and eventually working on research of his own. He also volunteered as an Engineering Ambassadors guide, leading tours for prospective engineering students.

Outside the classroom and lab, Adu-Gyamfi was active in several organizations around campus. He joined the VCU chapter of the American Institute of Chemical Engineers where he served as treasurer and secretary. He helped form an organization called Black Excellence at VCU. The group offers workshops and seminars and promotes the lives of minority students at the university. Each year the group awards a $1,000 scholarship to five students. The money is raised through an annual charity ball.

“I did work for Black Excellence to give back to the community,” Adu-Gyamfi said.

He received the scholarship one year and also was awarded the Julia and Nicholas Cain Scholarship, the first scholarship endowed by VCU engineering alumni. Adu-Gyamfi’s ultimate goal is to earn his doctorate and work in the pharmaceutical industry. He knows, however, he has a long road ahead. He has been accepted into the master’s program at Columbia but is hoping after a year he can transfer into the doctoral program.

McQuade said it has been great to see Adu-Gyamfi grow both personally and professionally at VCU. He is confident Adu-Gyamfi will be successful after graduation.

“It’s been cool to watch him blossom while at college,” McQuade said. “Sam has really come into his own.”