VCU Engineering’s newest building has a past

What has the site of VCU’s upcoming Maker Garage been up to these last 130 years? 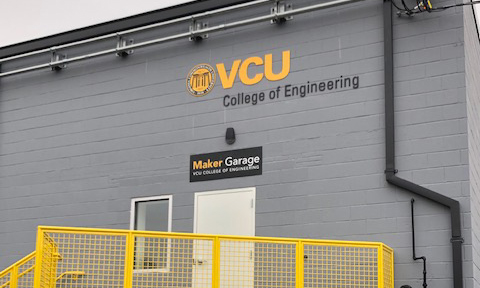 The industrial-chic brick building at 12 W. Cary Street, known to the community for decades as Grubbs Auto Service, will soon reopen as VCU’s Maker Garage. Here, students will design and build high-performance Formula SAE cars, Hyperloop vehicles and other pieces of transportation’s future.

Like all repurposed structures, this one has a past. VCU is simply its newest caretaker. Let’s take a walk down Memory Lane and discover the history of this familiar cinder block structure, of the brick home that once stood in its place and why the site’s connection to transportation makes this a natural home for the next generation of vehicles.

VCU Engineering is simply the newest caretaker of the storied property most recently known throughout the community as Grubbs’ Auto Service. (Photo by Dan Wagner, VCU College of Engineering)

Little is known about houses that may have stood on this block of Cary Street before the late 1880s. The end of that decade, however, was a time of record growth and prosperity for Richmond. Population soared to 81,000 and upscale neighborhoods were proliferating.

12 W. Cary first appears in the Richmond City Directory in 1889 as a family residence. The owner — and possible builder — of the house was William Gibson. A carpenter by training, he and his wife, Jesse, had immigrated to Virginia from Scotland some time before 1860. In Richmond, Gibson became a prosperous contractor who oversaw major building projects for the city. He was building the Cathedral of the Sacred Heart when he died in 1903 at age 79. 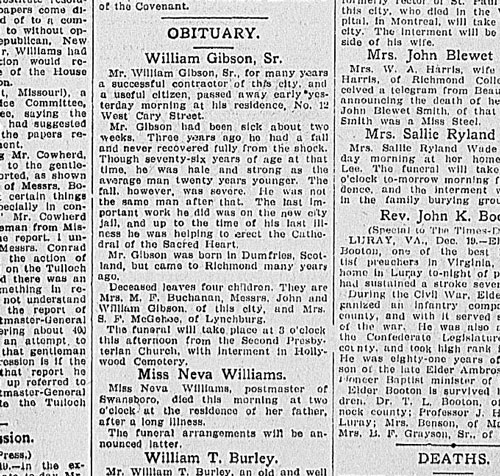 The December 20, 1903, Richmond Times-Dispatch obituary of William Gibson. A wealthy builder whose company built the Richmond City Jail and worked on the Cathedral of the Sacred Heart, Gibson is the first known resident of 12 W. Cary Street. (Image courtesy of the Library of Congress)

Around the time Gibson’s house was built, Richmond was gaining international fame for a major engineering achievement: the world’s first electric commercial trolley. More than 60 cities worldwide attempted this feat before Richmond succeeded. For this reason, the Richmond Union Passenger Railway is listed by the Institute of Electrical and Electronics Engineers as an IEEE Milestone for 1888.

Richmond’s expanding trolley map made Gibson’s house increasingly desirable. By 1900, streetcars ran along Cary and Main Street, and on First Street, a block and a half east of the house. The alley directly behind the house even connected to a streetcar maintenance bay.

Trolley tracks from the alley to the back of the current building’s interior are still visible. (Photo by Dan Wagner, VCU College of Engineering)

After Gibson’s death, his daughter Margaret F. Buchanan and granddaughters Jessie and Isabelle Buchanan continued on in the house. As evidence of their means, in 1909 all three women are listed on the manifest of the S.S. Furnessia ocean liner returning to New York from Glasgow, Scotland, perhaps from visiting relatives.

Mrs. M.F. Buchanan, Jessie Buchanan and Isabelle Buchanan, Gibson’s daughter and granddaughters, are listed on the manifest of the S.S. Furnessia, an ocean liner returning to the U.S. from Scotland in 1909. (Image courtesy of FamilySearch, the Church of Jesus Christ of Latter-Day Saints)

“No. 12 W. Cary St.” was listed for sale in 1907, described as a “very desirable Brick Dwelling” with nine rooms and “modern conveniences.” It had four subsequent inhabitants: a politically-minded sheriff, a family of clerks and a thrift shop. It also has at least two significant connections to Richmond’s Baptist community. (See timeline below.) 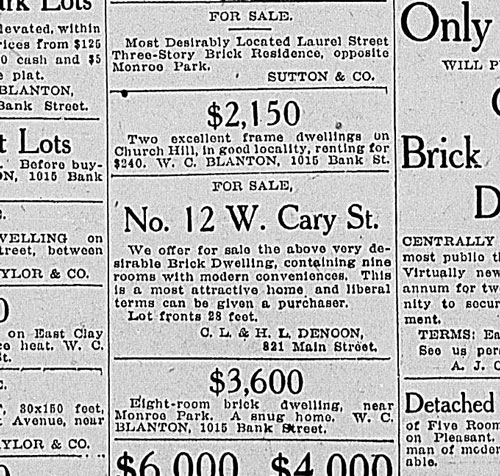 An ad for a “very desirable Brick Dwelling” at 12 W. Cary ran in the June 2, 1907, Richmond Times-Dispatch. (Image courtesy of the Library of Congress)

From John E. Epps’ March 12, 1911, obituary in the Richmond Times-Dispatch. Called “the honest blacksmith,” he served as the city’s sheriff and deputy city sergeant. (Image courtesy of the Library of Congress) 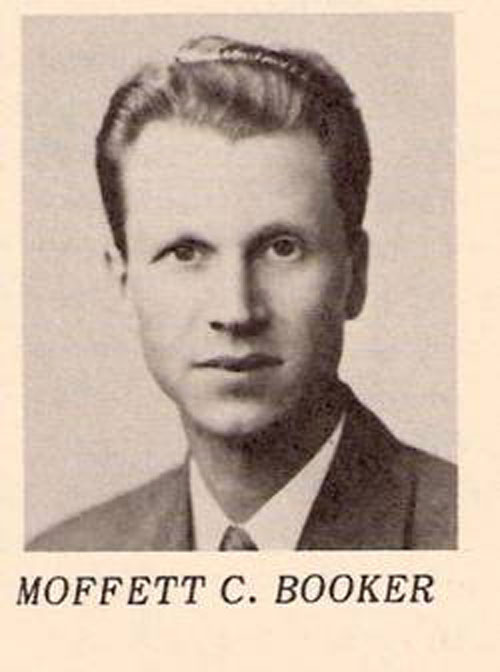 Rev. Moffett Booker grew up at 12 W. Cary Street. He was the minister of historic Branch’s Baptist Church 1951 - 1962. (Photo courtesy of James Dillard)

In the 1940s, busses and cars made the trolleys less relevant. On November 25, 1949, Richmond’s trolleys made a final parade down Main Street before the history-making streetcars were ceremonially burned.

Over time, Cary Street became increasingly industrial. In her 1950 book “Old Neighborhoods of Richmond,” Richmond historian Mary Wingfield Scott lamented that “Cary Street, once a prosperous residence-district, has become a speedway to the financial district . . . . One old house after another has given place to a filling station. . . and the arid waste of gas-tanks.” 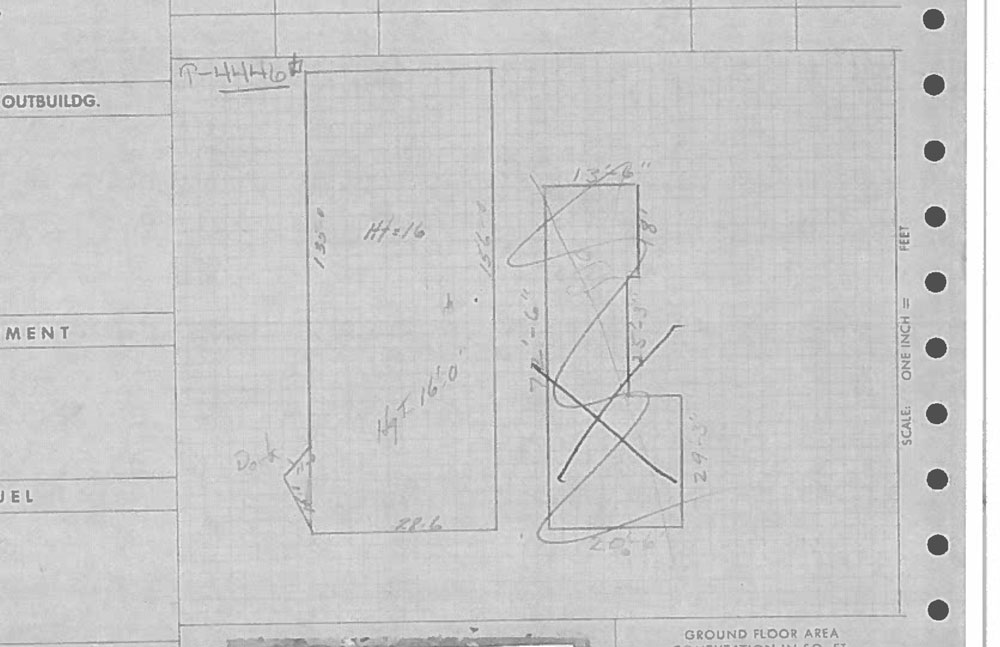 The original brick house was demolished June 22, 1960, to make way for a new cinder block industrial structure with a bigger footprint. This image from the property card at the City of Richmond Assessor’s Office depicts the new building’s footprint alongside a crossed-out sketch of the earlier building’s. (Image courtesy of the City of Richmond Assessor’s Office)

The current building covers the footprints of both the house and the trolley maintenance station behind it. Traces of the latter survive. Trolley tracks from the alleyway into the back of the current building are still visible. In the very back of the interior is the elevated platform that gave technicians access to streetcar motors.

The current building includes the former streetcar maintenance station that was behind the original house’s backyard. Trolley cars could pull into the station from the alley. The elevated platform gave mechanics and electricians access to the car’s systems. (Photo by Dan Wagner, VCU College of Engineering)

The Electrical Equipment Storage Company remained until 1977. The building was sold in 1979 to Thomas and Hazel Harris for $65,000. It became Harris Automotive Repair, a four-bay garage that operated until 1986. 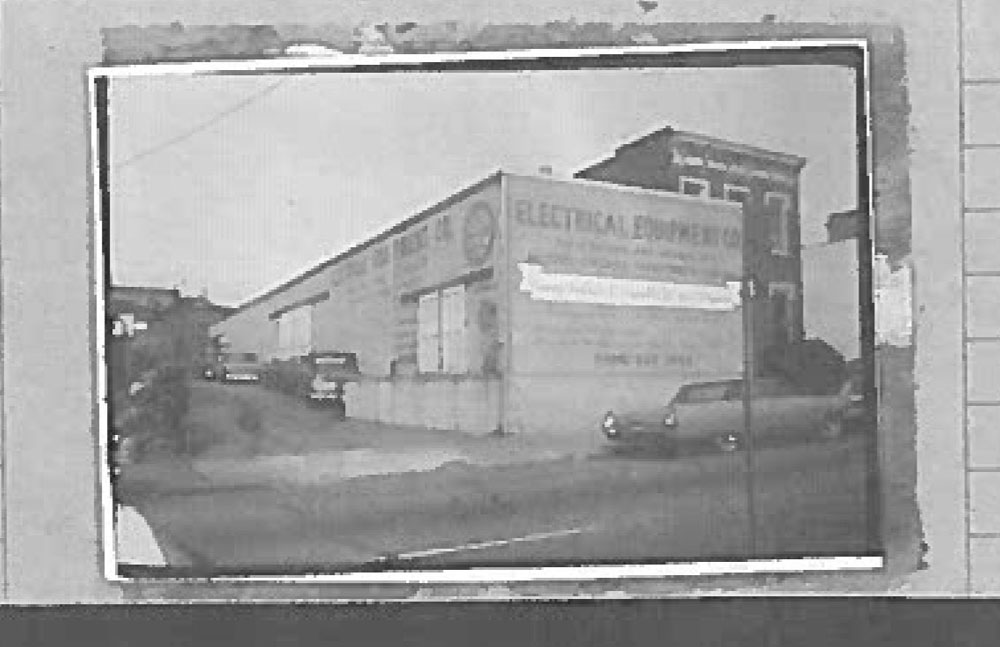 The Electrical Equipment Storage Company, the first of three businesses to occupy 12 W. Cary Street after the new structure was built. (Image courtesy of the City of Richmond Assessor’s Office)

In 1987, William and Audrey Grubbs bought the property for $175,000 and opened Grubbs Auto Service, which was celebrated by customers for its service and prices. “I asked my coworkers and friends and they all highly recommended Grubbs' over by VCU,” one customer said. “I was not disappointed. It was a friendly, mom and pop-style car service and the cost was very reasonable!” 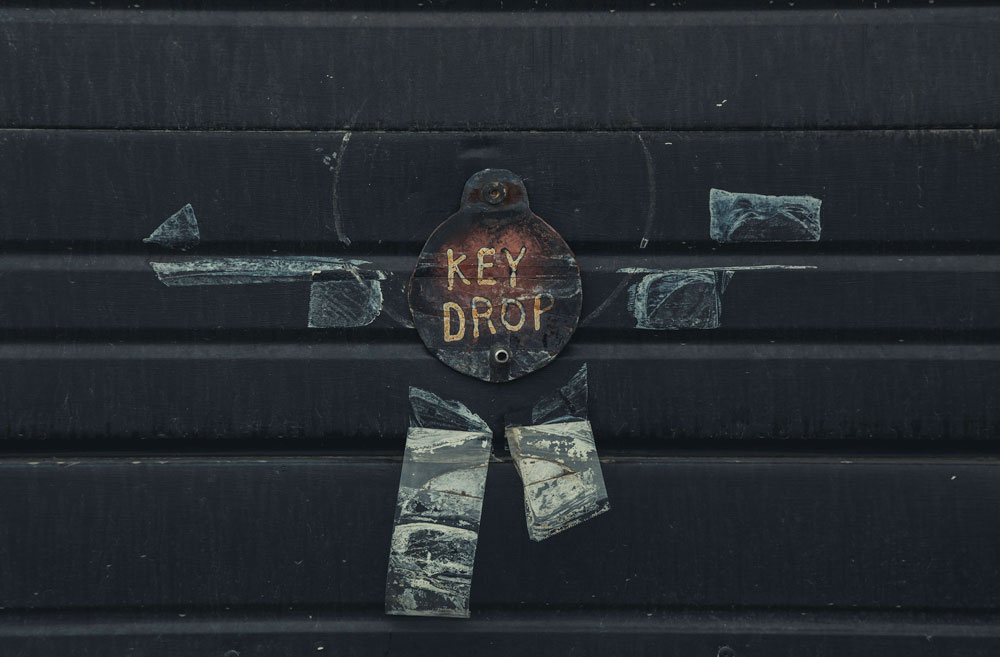 Upon the death of her husband in 2017, Mrs. Grubbs sold the building to the VCU College of Engineering Foundation. When students and their professors move into their new Maker Garage, the past and future will converge. Computers and flat-screens will flicker alongside old-school wood- and metalworking tools. New inventors will use them all as they imagine — and build — powerful new vehicles this space’s former occupants could have only dreamed of.

Special thanks to Janina Holly for research assistance.