But when Chadwick’s son, a mechanical engineering major in the Virginia Commonwealth University College of Engineering, started talking excitedly about Musk’s futuristic transportation concept known as Hyperloop, he admits he was a bit lost.

“I’d never even heard of Hyperloop,” the elder Chadwick said. “Are we talking time travel here?”

Not quite, his son told him. It’s more like extreme high-speed travel: passengers in pod vehicles zipping from Washington to New York City in less than a half-hour.

A musician with a passion for entrepreneurship, Arthur Chadwick founded Hyperloop at VCU in the fall of 2017 as a sophomore. Recruiting many of his friends, he led the group to compete in the international SpaceX Hyperloop Pod Competition that challenges university teams to design and build the best transport pod vehicle.

This weekend, Chadwick and others depart for Hawthorne, California, as one of 20 teams worldwide — and one of only 11 from the U.S. — to advance to the 2018 Hyperloop finals. “We want to represent VCU and VCU College of Engineering. We want to be able to show that we are one of these high-velocity teams that gets stuff done,” he said. “I’m excited to see what others think of our design. I’m excited to connect with new people and network.”

Chadwick, who grew up in a rustic, two-story cabin in Powhatan County, liked to fold paper airplanes and create elaborate origami creatures when he was younger. “The hardest thing I made was this cool dragon,” he said. He remembers dreaming about origami one time: “I was stuck on a fold I couldn’t do.”

He would often use the instructions he found in books and online videos as a starting point, he said. “It was more fun to make something and see what’ll happen.”

His father, a former electrical engineer, said, “When you see someone do that, you think this guy might be on a trajectory toward engineering. He was just really fascinated by design.”

Arthur Chadwick said he felt he would be able to take advantage of various opportunities at VCU. Starting out as a chemistry major, he switched to mechanical engineering after one semester. He was accepted into the VCU Innovate Living-Learning Program, which offers a certificate in venture creation and the opportunity to live with peers in university housing. This spring he decided to take up beatboxing — imitating percussion sounds with the voice — and performed with The Notochords, an a cappella group at VCU.

His professors say Chadwick has grown as a leader, praising his determination, thoughtfulness and organizational skills.

During the summer of 2017, Chadwick sought advice from Charles Cartin, Ph.D., associate professor in the Department of Mechanical and Nuclear Engineering, about getting more involved in engineering. Cartin encouraged him to look into student organizations or labs where he could get hands-on experience — and design competitions.

Chadwick recalled wondering why there was not a Hyperloop organization at VCU since the first competition was announced in 2015. He thought, “Why don’t I try to look into it?”

Laura Lemza, assistant director of career and industry advising in the College of Engineering, said, “What I most admire about Arthur is that he’s humble. He didn’t think he was anybody special to get this going. He decided to be brave and just do it.” 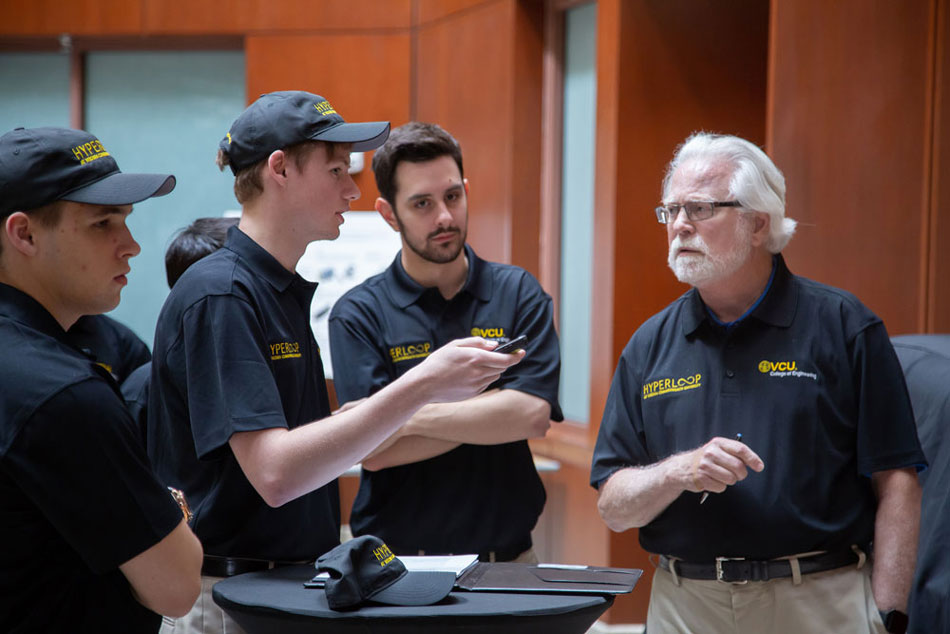 Chadwick serves as president and project manager of Hyperloop at VCU, a team of more than 40 students in the fields of engineering, business, arts and humanities and sciences. He said his previous experience earning the rank of Eagle Scout, helping to manage a golf course in a previous job and participating in VCU’s I-LEAD Connect student leadership program all helped him learn about management and leadership.

Dealing with a plethora of logistics on a tight timeframe for the Hyperloop competition, Chadwick strived to make sure everyone followed through on plans. “The most valuable lesson I’ve learned is that things don’t just happen overnight,” he said.

He also pitched in on projects such as designing the suspension system. “I like being able to oversee things and directly help,” he said.

VCU accounting major Harrison Powers, a rising sophomore who played in a high school jazz band with Chadwick, said, “Arthur’s really good at listening to people. That makes him a really good leader — it’s one of the things that’s kept this group together.”

Bathula and Chadwick formed a team with a couple of other students at a weekend MedHacks hackathon at Johns Hopkins University in September 2017. “I could tell he’s pretty good at managing people,” Bathula said. “He does a pretty good job of planning things out and setting goals.” The group designed a pill box with sensors that encourages patients to take their medications. Out of more than 100 projects created during the 36-hour event, theirs finished in the top six.

Chadwick said the MedHacks team fulfilled his expectations of how much a group could accomplish together. Allowing each individual to contribute his or her particular strengths and working as one makes for strong teamwork, he said.

On the Hyperloop team, there have been plenty of chances for eager members to dive in and pick up new skills. Chadwick said he did not have much experience with some of the machine equipment that was used to fabricate the pod vehicle. “I had to ask other members,” he said.

That willingness to start new things — and then see them through — is something his friends admire about him. Powers said he has watched Chadwick improve on the trumpet and even try his hand at producing original music.

As for Hyperloop, Powers said, “He’s going to follow through with this, too.”