After Historic SpaceX Debut, Hyperloop at VCU Sets Its Sights on the Future

Cheers erupted from the grandstand when SpaceX officials announced they will host a fourth Hyperloop Pod Competition next year, shortly after declaring the winners of this year’s international competition in Hawthorne, California.

WARR Hyperloop from the Technical University of Munich claimed the speed title for the 2018 competition, with their pod vehicle reaching 290 mph in the three-quarter-mile test tube. The long-term goal for hyperloop technology is to achieve 700 mph.

Twenty students from VCU made the trip to California, and a dozen core members worked many long hours to integrate the multiple complex systems of mechanical, propulsion, electrical, breaking and software controls. VCU’s Hyperloop team is inspired and energetic to compete in the next SpaceX competition.

“A lot of planning will happen very soon after we return,” said Hyperloop at VCU President Arthur Chadwick, who led his team to the SpaceX Hyperloop Pod Competition finals as a first-year team. Hyperloop at VCU is one of only 20 teams worldwide and one of only nine American teams to earn a place in the 2018 finals.

“We all understand each other better [after completing this year’s competition] and how each other works, and this time, we have a full year to really think about and prepare things instead of working twice as hard in half the time,” said Chadwick, a rising junior mechanical engineering major in the VCU College of Engineering.

Beginning only in September 2017, then accelerating through two preliminary rounds, Hyperloop at VCU learned only in January 2018 that they would be among the 20 teams invited to compete in the final round at SpaceX headquarters in July in Hawthorne, California.

Now back from that competition, team members are eager to take what they learned from meeting other teams and from working closely with SpaceX engineers and put that knowledge to work building next year’s team and refining their pod vehicle’s design. Relive the journey.

“Next year, I think we need to be simple again,” said Brendan Fisher, vice president and mechanical co-lead, referring to the pod’s design, which had earned praise from SpaceX engineers for being simple and lightweight. “I’d like to be all electronic as opposed to pneumatic.”

Fisher, also a rising junior mechanical engineering student, said the team can remove a lot of variables by designing the pod to ride on top of the I-beam rail as some teams have, instead of beneath it. To operate inside the test tube, prototype pods must fit onto an I-beam rail inside that runs along the bottom of the tube.

“I think we’ve learned a lot and that’s what I wanted to do out here,” said Tyler Brayton, mechanical engineering student and pod design lead. “My goal out here was to learn how the entire testing week goes.”

For some, a major takeaway from this year’s competition is the importance of planning ahead, whether in writing operational procedures that SpaceX requires or in sourcing parts early and communicating more with suppliers to avoid last-minute surprises. 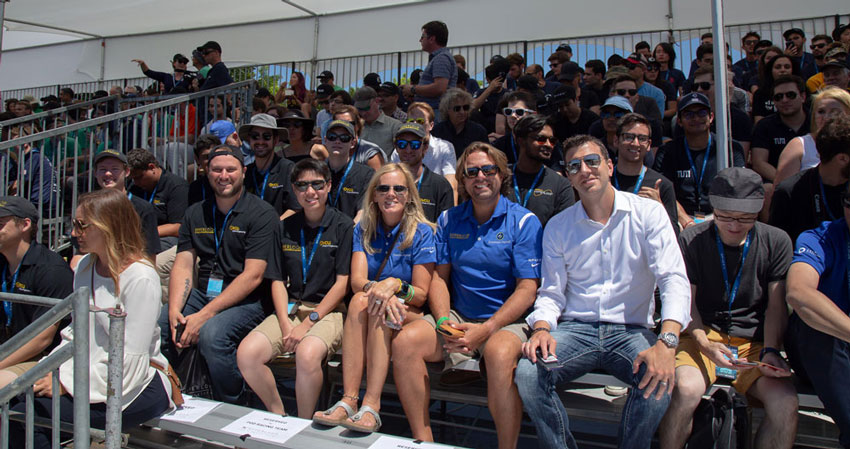 “Being around SpaceX and understanding how they function and operate is super helpful for next year,” said Matthew Kozak, controls co-lead and computer engineering student. “I think our biggest learning experience was the whole process of designing a product, having requirements, determining what the best options are for that and ending at a point, then having to revise it.”

Kozak was describing an iterative process of design and improvement the team wants to formalize next year through a project management system to help keep all the systems on schedule.

Jay Khandpur, mechanical team member, said he looks forward to time after the competition “so I can have a week to reflect on everything that has happened, so next year it can be better.”

Khandpur said he learned a lot about dealing with people during competition week and the flexibility that comes from training as a mechanical engineer.

“Whatever position I’m needed in next year, I can adapt quickly,” he said.

For Sudhansu Shrestha, his training as a double major in computer engineering and computer science also played a large part in allowing him to contribute to the pod’s functionality. “It’s been a great experience, seeing how I can apply knowledge of both areas at once,” he said.

“Taking something we imagined and transforming it to a reality, it’s been surreal. A couple of months ago, we were unsure we were going to get it and now, here we are,” he said.

For the youngest member of Hyperloop at VCU and one who has yet to sit through his first college class, rising first-year student Logan Schorr said this experience has given him a glimpse into his future as a mechanical engineer and has already bonded him to a team that will help him when classes begin.

“I have a bunch of friends in Hyperloop that I didn’t have and will have people in other classes to look to for advice on things,” he said. “It’s just really cool being able to do an experience as not even a freshman quite yet.”

While he didn’t feel entirely comfortable answering questions about the pod’s design and mechanics during the team’s individual safety briefing with SpaceX engineers shortly after arrival, Schorr said he “soaked up the experience as much as I could, and the awe of being in a SpaceX building and talking to the SpaceX engineers – that was fantastic.” 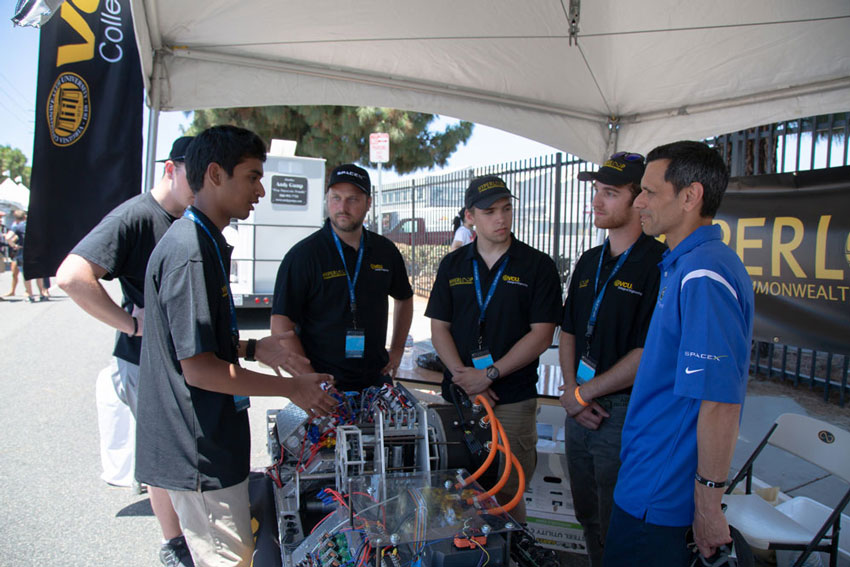 Hyperloop at VCU team members give VCU President Michael Rao, Ph.D., a closer look at the inner workings of their pod vehicle design.

VCU President Michael Rao, Ph.D., along with his family and sponsors from Dominion Payroll, Kaleo and VCU’s da Vinci Center, attended the competition, giving the team their support and encouragement.

Generous donations from the team’s many sponsors provided essential materials, components, facilities  — and advice — for construction of this very complex 6’ pod vehicle. “That really means a lot to all of us,” said Harrison Powers, finance major from the School of Business and fundraising lead for the team.

“It was really great to see they were interested in the fruits of our labors in design, construction and representing VCU. Knowing the community cares and wants to see that we’re taking this knowledge to the next level will motivate us for next year,” he said.

Nearly all team members expressed appreciation for the knowledge gained as first-time competitors and an eagerness to put that knowledge to work and come back better and stronger next year. It was a perfect realization of VCU’s motto: “Make it Real.”

“This whole process has allowed us to next year be really prepared to crush through all those checklist points, really before we even get here. That’s exciting,” said Patrick Welch, rising senior mechanical engineering student and mechanical co-lead of Hyperloop at VCU. “It’s less like a competition and more like a camaraderie where people are coming together to show off what they did and see how they can get through the testing.”

Welch talked about VCU now being part of a global mindshare in which others from around the world are overcoming language barriers to advance this new concept of high-speed transportation and being very grateful “to everyone who’s been there supporting us and continuing to support us.” 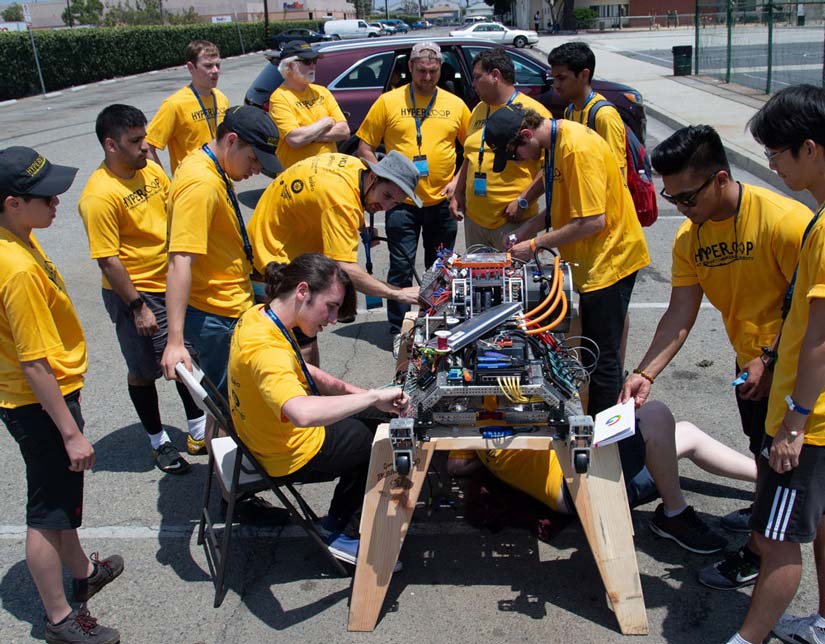 Hyperloop at VCU faculty adviser L. Franklin Bost, M.B.A., IDSA, FAIMBE, executive associate dean for innovation and outreach, and team president Chadwick attended the conference and participated in a poster session about VCU’s Hyperloop team. The conference brought a global perspective on the development of Hyperloop technologies and transit systems in Asia, Europe and the U.S.

“The thing that sticks in my mind is this is a movement on a much larger scale and this organization (Hyperloop at VCU) is just a small part of something that’s going to be procured and refined over the next decade or so,” said Chadwick.

“I hope that this competition, throughout the entire year, has inspired and sparked a lot of people at VCU and alumni and mentors to contribute because all these teams want to make something better and we’re one of those teams that wants to do just that.”