Collaborators from the Virginia Commonwealth University School of Medicine, School of the Arts and College of Engineering have designed a training model that provides surgery residents a new tool to practice their skills in the operating room.

The Advanced Microsurgery Trainer, developed by VCU faculty members and an alumna, is a 3D model torso that simulates blood flow, vessels, cardiac distress and a chest cavity.

On an early morning in July, VCU surgery residents gathered at VCU’s McGlothlin Medical Education Center to test the first prototype of the model, which eventually will be used to refine anastomosis, a suturing technique for connecting blood vessels.

The prototype allows residents to practice anastomosis techniques used in multiple types of surgeries but it was specifically designed to simulate anastomosis during DIEP flap surgery, a breast reconstruction technique for women who have had mastectomies. 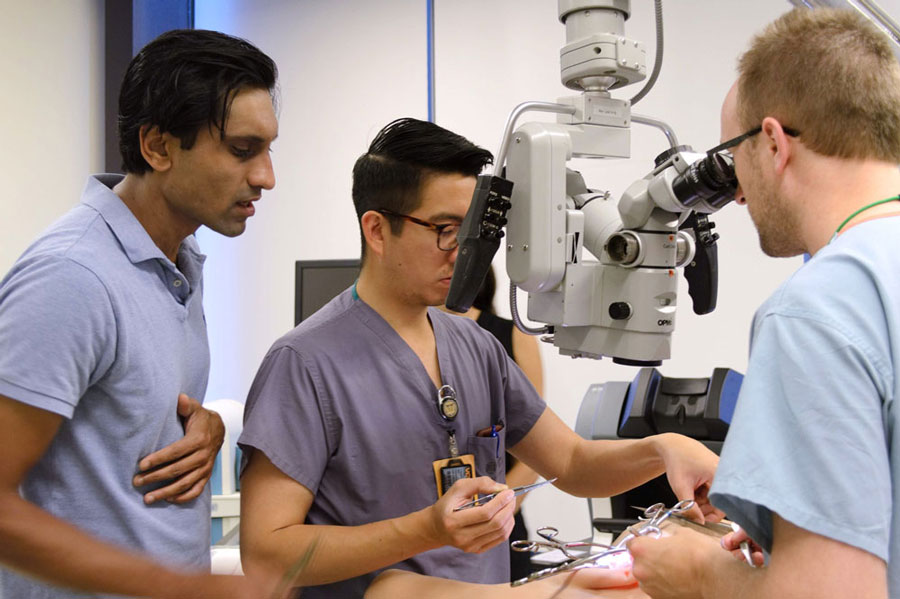 Santosh Kale, M.D., assistant professor of surgery at the School of Medicine, developed the idea for the trainer. Kale wanted to address the absence of realistic models for teaching anastomosis. Animal models and tabletop models made of rubber tubes that simulate blood vessels currently are used.

“A human is much larger than an animal, so there are more three-dimensional constraints in humans to consider,” Kale said. “There are also intricacies that are unique to human physiology that may be subtly different from animal physiology.”

With that in mind, Kale gathered a team that could design a model to simulate bodily functions and responses.

The resident demonstration came 18 months after the awarding of a VCU Presidential Research Quest Fund grant dedicated to the project.

VCU School of Medicine plastic surgery residents Franklin Lew, M.D., and Jonathan Miller, M.D., were the first to test their skills with the Advanced Microsurgery Trainer. They peered into scopes magnifying anatomy within the simulated cavity and sutured vessels the same way they would suture miniscule, 1- to 3-millimeter-wide vessels in a patient.

“In relation to the tabletop models we were working with, this is an amazing improvement,” Miller said. “It is impressive what they have managed to do.”

Yacoe, a sculptor, created the torso model, which includes an anatomically accurate chest cavity. Her process began by observing Kale perform anastomosis during DIEP flap surgery in the operating room. She then constructed the model out of specialized materials that accurately simulate the look and physical qualities of human tissue. The model is one of many collaborative projects Yacoe has worked on with medical professionals at VCU.

“The torso has realistically simulated tissues, which means it has different layers of skin plus muscles, vessels and ribs,” she said. “Basically, it anatomically re-creates the area where anastomosis surgery is performed for this specific type of breast reconstruction.” 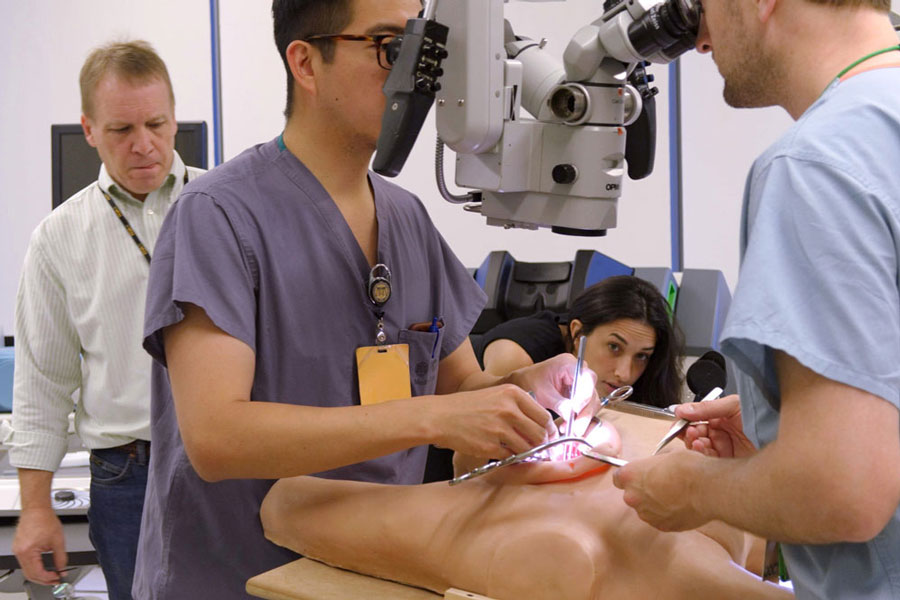 Peter Pidcoe, Ph.D., back left; and Morgan Yacoe, back center, inspect the operation of the Advanced Microsurgery Trainer by residents.

Pidcoe engineered a pump within the chest that simulates blood pressure levels. The pump also simulates the flow of oxygenated blood out of the heart and oxygen-depleted blood into it.

“It is a realistic system that no one has built before,” he said, adding that following the simulations, instructors “can test the quality of the sutures by adjusting heart rate, blood flow and blood pressure through the vessels.”

Pidcoe also created an Android application that controls the system. In subsequent prototypes, control of the simulated cardiovascular system will allow residents to learn what to do in emergency situations during anastomosis. Future prototypes will allow them to practice additional microsurgical techniques under variable cardiovascular constraints.

“The goal of our prototype is to be a proof of concept so we can show that it works for this particular microsurgery situation,” Kale said. “We can expand the concept and apply it to other areas of microsurgery and fields that use microsurgical techniques.”

Residents also can log their suture times in the application to track progress over time.

“We will continue to refine the concept to make it as realistic as possible,” Kale said. “We want to make more of these models and permanently integrate them into the training process. We want residents to be able to practice on realistic models during their down time and to be able to document improvements.”