It’s not every day an engineering scholar takes the stage at Gallery 5, the edgy gallery and performance space in downtown Richmond’s Jackson Ward neighborhood. But Karla Mossi, Ph.D., associate professor of mechanical and nuclear engineering, did just that Nov. 5, 2019, as part of the inaugural Science-Art Exchange.

Funded in part by the Department of Mechanical and Nuclear Engineering, the event was designed to help scientists and artists talk to each other. Three science researchers, which also included neuroscience doctoral candidate Elizabeth Thomason and environmental biology doctoral candidate Daniel Albrecht-Mallinger, gave brief talks before an audience of about 50 artists and scientists. It concluded with an audience talk-back.

Mossi’s topic was energy sources. She started with some reality therapy: No energy source is clean and reliable. Eighty percent of energy in the U.S. comes from nonrenewable sources, but renewables are not the magic bullet. There’s waste associated with wind and solar power (think of the tons of plastic required to harvest them). They’re also hard to store and distribute and aren’t always available.

A sensible mix of sources is the only realistic solution, Mossi said. An expert in smart materials, she described next-gen energy wonders engineers are working on, such as shoe inserts that can power a cell phone as the user walks. 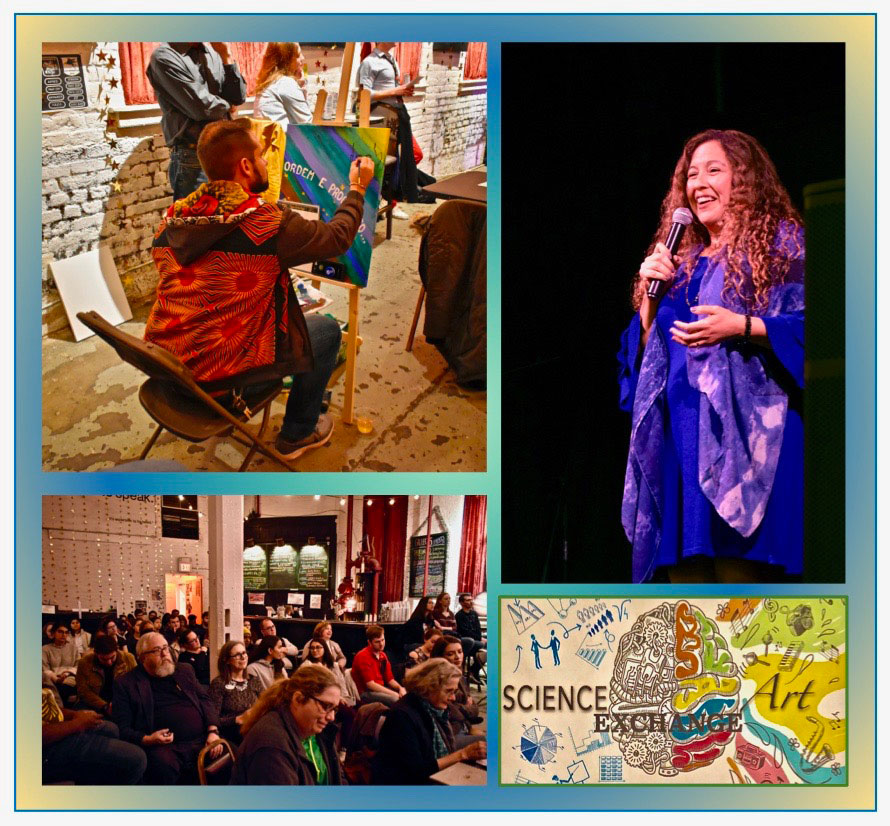 Nuclear must be a part of the clean energy mix, she said. A single teaspoon of uranium, the substance used to generate nuclear power, can replace a ton of coal, she said, adding that coal mining is among the world’s most dangerous professions. “Statistically, there are 161 worker deaths per terawatt hour of coal-based energy,” Mossi explained. “The number of deaths per terawatt hour of nuclear energy is less than one.”

In the question and answer period, an audience member asked if nuclear were really the best option we have for energy. “There is not one energy solution for all things,” Mossi replied. “So many things are happening in this area right now, and we need to discuss all of them.”

Mossi added that American attitudes toward energy should also be part of that discussion. “People say they want green energy practices. At the same time, they also want 24-hour air conditioning and hour-long showers,” she said. “A clean approach to our lifestyle is not possible.”

A question about kinetic energy sources brought the discussion to the future. New technologies in energy harvesting include artificial trees that produce light when the wind hits the leaves, Mossi said.

Smart clothing materials that can warm or cool the wearer may someday be a practical alternative to air conditioning — and may also have applications for military clothing, which sometimes has so many battery packs that it’s heavier than what soldiers wore in the Middle Ages. An IBM study on human movement even has implications for researchers working in nerve regeneration for people with paralysis.

“It’s an amazing world out there,” she said. “A lot of what is in television and movies is real.”