Scientist, Artist, Inventor, Dean: The Many Sides of Shawn Brixey

At first glance, Shawn Brixey’s lab looks like any other in the Virginia Commonwealth University College of Engineering.

For starters, there are optical isolation tables, lasers, video microscopes, circuit board printers, oscilloscopes, and computer numeric control machine tools. It looks and feels a lot like a hybrid physics/engineering lab.

Brixey, dean of the VCU School of the Arts since July 2017, is perhaps the first art school dean to have a laboratory rather than a studio. To be sure, Brixey is a rarity — equal parts artist and scientist.

With strong arts, design, science and engineering knowledge — and a Massachusetts Institute of Technology education — Brixey is equally comfortable among scientists as he is with artists. He recognizes that scientists share the same sense of awe and wonder, derived from the same place, as artists.

“We use different methodology and we approach creative problem solving differently,” he said. “But one of our fundamental goals is as we experience the structure and behavior of the world around us through observation, experiment, intervention and expression, we both want to discover what it means to be human and then document that in ways that no one's ever really imagined.”

Artists and scientists have different audiences, goals and micro-languages, Brixey said. Yet some distinctions between the fields can be artificial.

“The flirtation, since the Renaissance, between the disciplines has now borne significant enough fruit and rigorous practitioners to where we can communicate effectively with one another, share our interests and find common goals, purpose and intellectual communion,” he said.

“He comes from the tech world and understands that art and technology are not so different,” Boyan said. “His expertise in novel interfaces, and research in visualization of complex ideas and systems, is a major focus of both engineering and the arts. He knows that it's not enough to write a brilliant computer program — you have to make it something people want to use. You have to make it beautiful. This is what Steve Jobs taught, too. Technology must be beautiful."

Former School of the Arts Dean Joseph H. Seipel thinks Brixey’s ability to speak with both sides presents a terrific opportunity for the school. Plus, because he's a an artist and scientist, Brixey understands the exciting overlaps.

“And that's exactly what VCU and VCUarts needs at this time,” Seipel said.

The single most perfect place

Deans are like venture capitalists, Brixey said. When looking to make career changes, they often look at an institution’s potential, its ambition, the lives of consequence the faculty and students want to lead, and the impact their community aspires toward. Also, are there qualities of the enterprise or brand attribute that are either under-recognized or underserved?

Brixey found that potential in Richmond, calling it the right place at the right time with the right people, where all ineffable lines converge.

“[VCU] is such an extraordinary institution whose DNA is wonderfully founded on the cores of a strong medical school and a renowned art school, which help form the cornerstones of our greatness,” he said. “And at VCU rather than sitting on our laurels, waving to one another from our positions of institutional ranking, we organically come together and continually ask, ‘What does it look like if we join forces and address issues collectively, collaboratively?’ … We’re all active, integrated partners in this extraordinary enterprise to discover new knowledge.”

Creativity, nimbleness and resilience have become some of the most important assets at any university, Brixey said, and with this in mind he believes universities need to move the national conversation concerning the arts away from thinking of art schools as jewels in the crown.

“You hear this language all the time,” he said. “I've never wanted to be that. Art school should be a finger on the hand that wields the hammer that builds empires.”

“He comes from the tech world and understands that art and technology are not so different. … He knows that it's not enough to write a brilliant computer program — you have to make it something people want to use. You have to make it beautiful. This is what Steve Jobs taught, too. Technology must be beautiful.” — Barbara D. Boyan, Ph.D.

With that in mind, Brixey began looking for a place with a unique “culture of innovation” that would allow the art and design school to be a pillar in an institutional foundation equal to any other in the university community. He believed the best place to build that national platform would likely be a state capital with a major research university, one that is deeply engaged with innovative interdisciplinary research. That state capital would have to have significant historical influence, proximity to the nation's capital, and a legacy of yielding important national leaders.

“You see where I’m headed with this,” he said, as he continued to tick off Richmond’s virtues. “Strong circuit courts, federal courts, a No. 1-ranked art and design school — because the No. 44-ranked school is not going to get you in the door. But unique to Virginia is the birthplace of [Thomas] Jefferson's great experiment. All public universities in the U.S. are inspired by, and in many ways the offspring of, that initial model [at the University of Virginia]. This is where we ignited the nation’s educational revolution. Add to it, [Virginia is] the epicenter for civil rights, social justice, etc. You could not have a more perfect place.”

And VCUarts was primed as a cross-collaborating pillar of the university under the leadership of Seipel, who advocated partnerships across the university, particularly between arts and the health sciences.

“You look at how art schools are set up around the country and many are specifically set up just for the arts,” Seipel said. “Here we have a real opportunity because we have an art school set up in the middle of a comprehensive research university. What a great opportunity that is for artists to be able to cross boundaries.”

It takes a “whole constellation of people,” including deans who share common languages, to create a university of thought leaders, Brixey said.

“The dean of engineering and I have highly synergistic world views from the academic to research side,” he said. “And if you sit down with [School of Business Dean] Ed Grier, or [School of Medicine Dean] Peter Buckley, you begin to see all of the university’s intellectual and collaborative lines naturally lining up, and all of a sudden, we're off to the races. We're not talking different languages, we're talking the same language but from different perspectives where all facets in a prism converge together.” 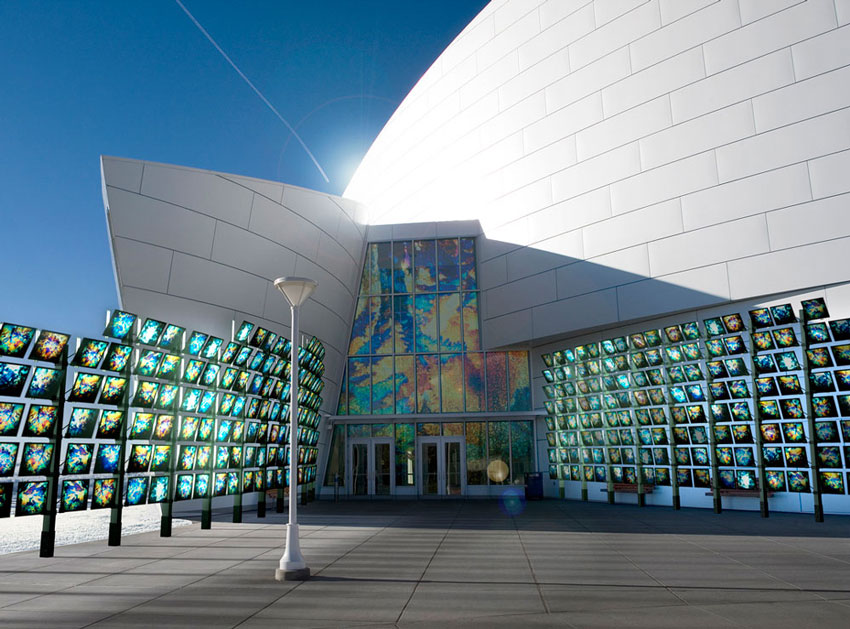 Which came first — art or science?

As a child of performers turned TV producers, Brixey practically grew up in a television studio.

“My first impressions of them were [that] what they did was not make movies or TV, but they teleported people,” he said. “And in the experience of that, everything that they were doing was creative. They were recording people's agency, their images, their dreams, their imaginations, their feelings — yet somehow magically encoding it in an electromagnetic force and transmitting it thousands of miles away to have it decoded and reconstructed.”

That experience led Brixey to see little distinction between the extraordinarily artistic and the technologically advanced. Even as a child, he said he would incorporate science into his nascent art work. “There were always elaborate … apparatuses that were poetic intermediaries between various forces and systems of energy — whether it was gravity or light — a practice that let me speak equally to the needs of the rational and emotive intellects,” he said.

As an undergraduate student, he attended art school but he soon realized the art he wanted to make was not possible with the art school tools and techniques on hand. To create that kind of work, he needed to harness the skill and knowledge of science and engineering, so he pursued and completed his graduate degree at MIT.

Since then, he’s created pieces such as an ice crystal cloned from ancient glacier samples, using nano-engineering techniques similar to those used to create semiconductors and solar cells.

Brixey does not believe that humans are simply hundred-year biological vessels that end with cell death or system failure. Rather, he said, humans are million-year creatures embedded in a billion-year process. He sees his artwork, then, as “doorways into a continuum of what humans were, are and will become, where my artwork primarily resides in the fabric of space-time and less in a gallery or museum.” 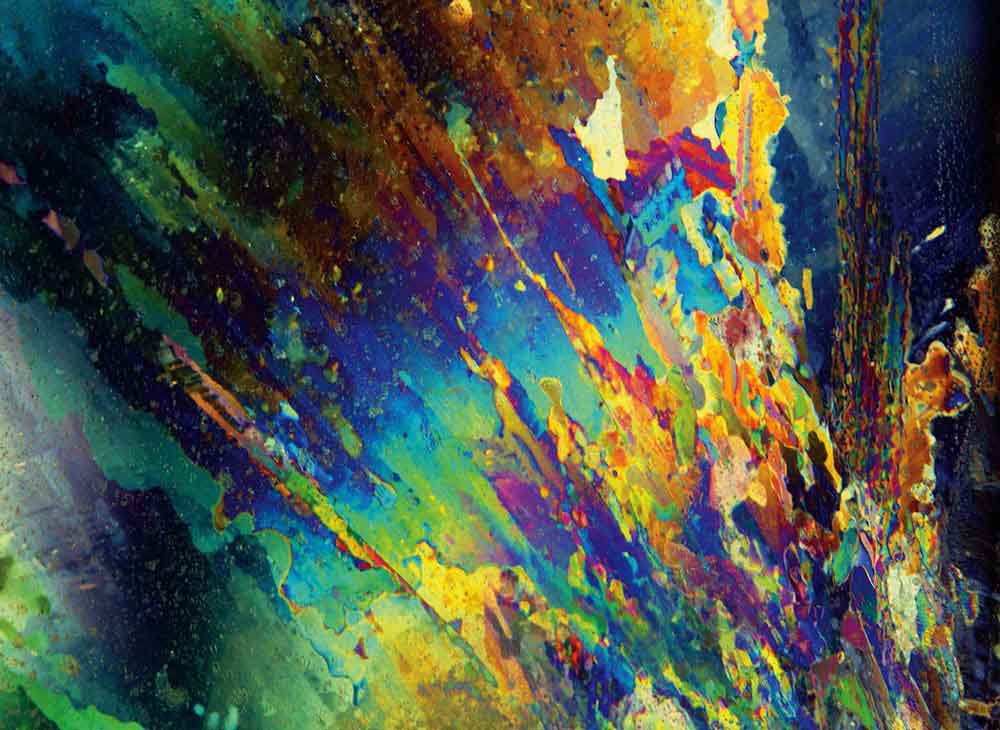 Exporting our experience to the world

After two semesters at VCU, Brixey said his initial impression persists: VCUarts is in the unusual position of upholding a large legacy, while at the same time projecting into the future.

“Our impact is that while artists understand that we still need to make work that feeds the soul, that work can actually serve society in new and unimaginable ways,” he said. “As we rapidly expand beyond the history of mastering the virtuosic performance or monastic studio practice, we increasingly become citizens of an institution that is actively striving to solve some of the world’s most vexing problems, many of which exist in our own community.”

A point of introduction to that worldview is VCU’s Arts Research Institute, which, Brixey said, helps artists peer into the research opportunities of their practice and see possibilities beyond their traditional sphere of influence, allowing them to imagine partnerships with other disciplines.

“The ARI serves as an organizing agency, a research incubator,” he said. “It serves as a mechanism to convert, for artists, much of what they do into collaborative languages and materials that will help them thrive in multiple milieus and disciplines. It's a convener of great ideas. Because of the ARI, we have so many of our faculty members in contact with engineering, science, health care, reaching out together saying, ‘Oh, we've got this great idea.’” 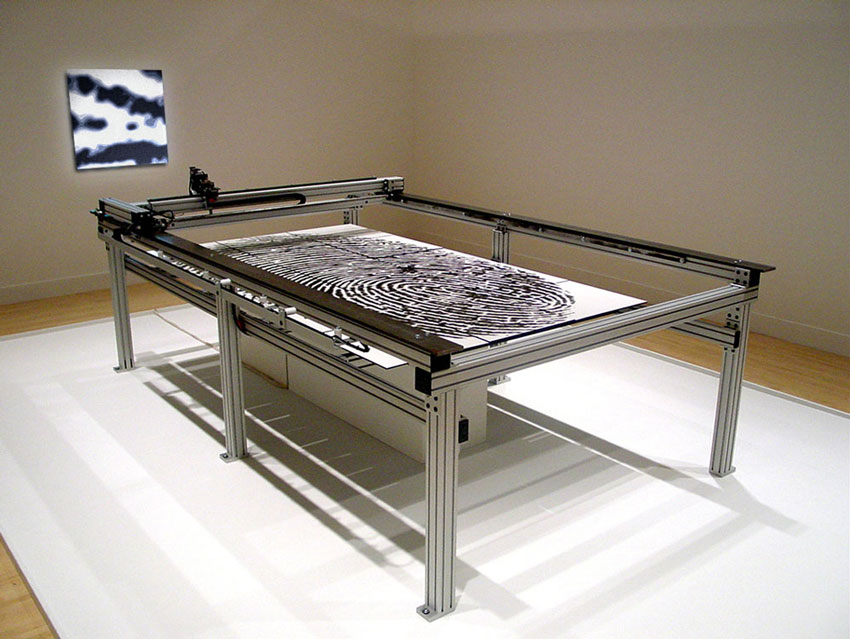 Brixey's "Chimera Obscura" centered on the remote operation of a tele-robot that millions of online visitors piloted through an elaborate real-world maze in a museum created from a human thumbprint. Stored data from visitors’ electronic "bread crumbs" comprising virtual information in the form of text, video and audio evolved into large-scale inhabited nodes that grew and mutated over time. (Photo courtesy of Shawn Brixey)

For instance, colleagues from the Department of Internal Medicine are working with the School of the Arts to research if the perceptual mechanisms that are so highly refined in the arts can add to the quality of patient care. Are patient outcomes better if doctors can learn to observe the world the same way as a landscape painter or cinematographer does?

“You have to think of it this way,” he said. “The somatic awareness of an artist is so crucial in the creation of that work, that then the somatic fidelity of the work — its ability to transfer that experience to you — is so extraordinarily important. The partnership that we have with other disciplines only helps us reinforce, refine and increase our ability to reach in with incredible nuance to create new meaning.”

The ARI is unusual among American research institutions because it functions in all these capacities, Brixey said. It's not an office of sponsored research that monitors expenditures. Rather, it helps artists and others see the world from multiple perspectives.

Such perspectives may include using motion capture technology to study an opera singer’s posture, where even the slightest shift of the shoulder or neck can change the relative quality of the singer’s voice.

“We should take enormous pride in the fact that we have an anchor institution that's embedded in an extraordinary community with research disciplines that are so deep and so committed to increasing the quality of life for, not just Richmonders, but as the urban laboratory exporting our experience of one another to the nation and the world,” Brixey said. “I'm extremely excited, honored and grateful to be here and to be one of many people all pulling together in that direction.”