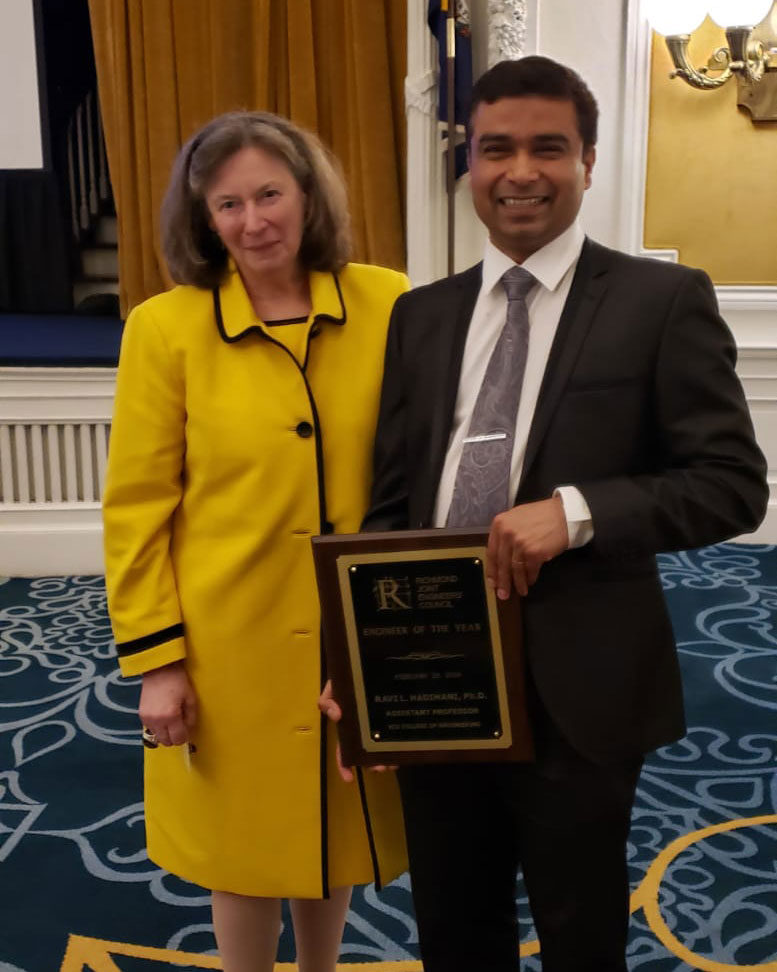 VCU Engineering Dean Barbara Boyan, Ph.D., and Hadimani at the RJEC banquet, where Hadimani was named Engineer of the Year for 2020. (Photo courtesy of Ravi Hadimani, Ph.D.)

Ravi Hadimani, Ph.D., assistant professor in the Department of Mechanical and Nuclear Engineering, was named Engineer of the Year by the Richmond Joint Engineers Council (RJEC). The award recognizes an individual, business or organization that has made a significant contribution to the engineering profession in greater Richmond. It was presented at the RJEC Engineers Week banquet held Feb. 20, 2020, at The Jefferson Hotel.

Hadimani came to VCU in 2016 and has “already had a remarkable career in engineering and made a lasting impact on the Richmond community,” said Ram B. Gupta, Ph.D., associate dean for faculty research development at VCU Engineering, who nominated Hadimani for the award.

Hadimani, director of VCU Engineering’s Biomagnetics Laboratory, is an expert in the use of magnetic fields for noninvasive brain stimulation, nanomagnetic materials and energy harvesting applications. He serves on the editorial boards of two high-impact journals, Nature Scientific Reports and IEEE Magnetics Letters, and is co-founder of Richmond’s Joint IEEE Magnetics and Engineering in Medicine and Biology Society.

Steve Kemp, immediate past chair of the IEEE Richmond section, recalled that Hadimani approached him initially about forming a magnetics society but there were not enough prospective members in the Richmond area. Kemp said Hadimani came up with the idea of a local IEEE society dedicated to magnetics and biomedical engineering, which sailed through approval and was quickly up and running. “Ravi immediately started a fall and spring lecture series with distinguished lectures from all over the world,” Kemp said, adding that Hadimani’s scholarship and connections continue to support IEEE’s goal to connect Richmond with the global leaders in academia and industry.

Under Hadimani’s leadership, VCU hosted the IEEE Magnetics Summer School in 2019, which brought approximately 100 of the world’s top doctoral candidates, as well as internationally renowned experts, to Richmond.

“Dr. Hadimani’s teaching and mentoring, particularly of the many doctoral students he’s had over the years, made a strong impression on the board,” Midyette said. “He has brought people who are at the highest level of the engineering field to Richmond and has also been an advocate for engineering education at all levels. Because of those accomplishments, coupled with his publications and patents, we felt he was very deserving of the Engineer of the Year award.”

Gary Tepper, Ph.D., chair of VCU’s Department of Mechanical and Nuclear Engineering, said Hadimani is “working toward establishing an internationally renowned program in brain stimulation and biomagnetism at VCU, and he is already making an impact in this field.”

Tepper also noted that Hadimani is equally committed to the next generation of engineers and “frequently hosts high school students in his laboratory with the objective of inspiring them to take up engineering degrees and achieve their career goals.”

Hadimani said he is humbled by this award.

“It is a great honor, especially given the fact that the previous honorees have achieved so much in their respective fields,” Hadimani said. “Getting this award means a lot to me.”