Researchers at Virginia Commonwealth University, in collaboration with the University of Trento, Italy, have created fully degradable, flexible, silk-protein films that could potentially be used for biomedical purposes including tissue regeneration, biosensors and drug delivery.

“Silk is a bio-inspired, bio-derived material. It’s a very versatile material that’s also very flexible,” said Vamsi K. Yadavalli, Ph.D., associate professor in the Department of Chemical and Life Science Engineering. In addition to having outstanding mechanical strength and being biocompatible, he said, “the beauty of this is that it’s completely biodegradable.”

Yadavalli, along with members of his VCU BioNano Laboratory and collaborators at University of Trento, where Yadavalli spent six months as a Fulbright U.S. Scholar in 2018, have authored a new paper, “Easy, scalable, robust, micropatterned silk fibroin cell substrates,” which was published in the March issue of the journal Advanced Material Interfaces.

The study demonstrates the fabrication of micropatterned silk-derived substrates, or base materials, using an invention developed by Yadavalli. He holds a patent for creating photoactive silk, and fabrication of silk protein structures using photolithography. 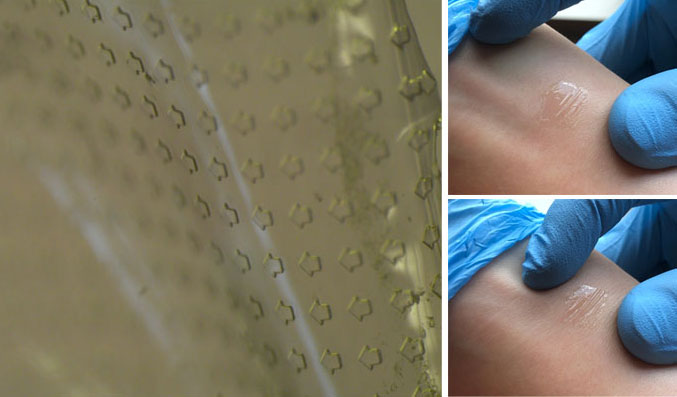 Clockwise from left: micropatterned film formed by photolithography; ultrathin silk-protein film can easily be applied to skin without adhesive, remaining strong even when stretched or squeezed.

Silk proteins have been used for years in various applications, Yadavalli said. But for high-tech uses, “if you want to very precisely control how you arrange or pattern the proteins, you need other functionalities that are not available in the regular silk cocoon or protein. That’s where this technology comes in. It’s taking a protein and converting it into a form that allows us to make very precise microscale architectures. The patent that we have covers this transformation.”

Photolithography is a method of creating patterns using UV light and light-sensitive materials. By transforming the silk protein in this way, it can be used as structural elements in biosensors, biophotonics, bioelectronics and other uses that directly interface with the body.

Natural materials, especially those that are flexible and biodegradable, are an appealing alternative to conventional silicon and inorganic materials. Being able to control the pace at which the materials degrade means that a biosensor could be implanted into the body, but “you then don’t have to go in and take it out later,” he said.

The project was supported in part by a grant from the National Science Foundation to engineer and fabricate biodegradable sensors.

Yadavalli said the recent paper was part of an expanding partnership with the Italian researchers. The VCU College of Engineering has recently signed an agreement with the University of Trento’s Department of Industrial Engineering to encourage future international faculty and student exchanges between Trento and VCU’s Department of Chemical and Life Science Engineering. “We’re continuing to collaborate,” he said.